A Leader For Luminaria 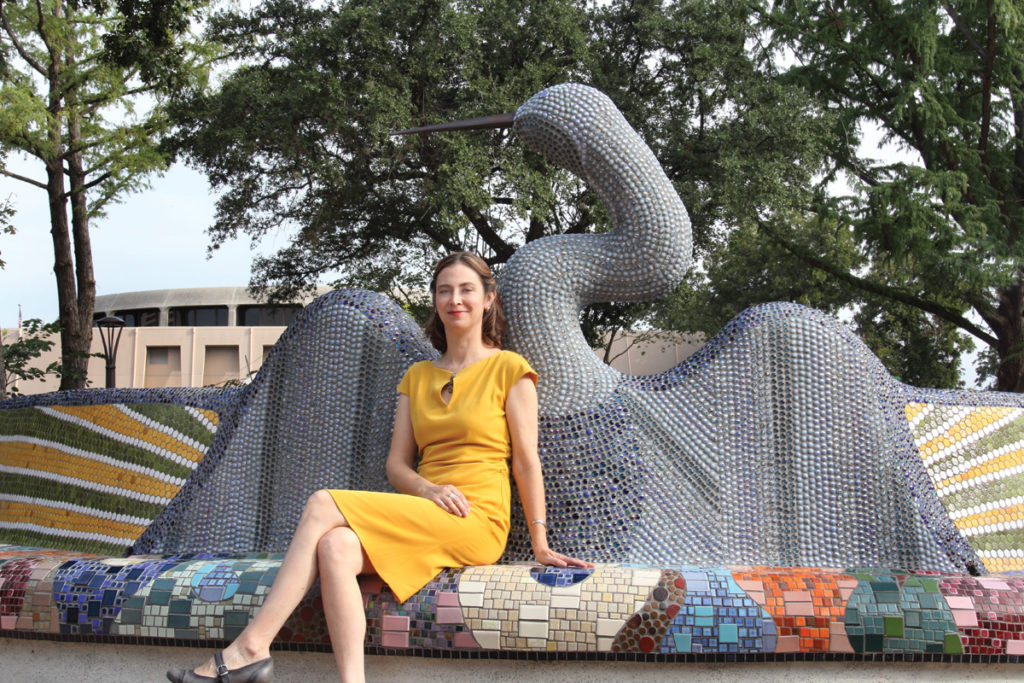 The contemporary arts festival known by the beautiful name of Luminaria has been a moving fest since its inception in 2008. In 2016, it took place on the near East Side, for instance, while the year before it clustered most of its activities around the San Antonio Museum of Art. The 2017 edition will unfold within the footprint of Hemisfair Park, encompassing the Yanaguana Garden, the Magik Theater, the Mexican Cultural Institute and the park’s buildings and spaces in between.

The idea behind the changing footprint is to spotlight different areas of the central city and encourage networking between businesses, artists and art organizations in those neighborhoods. And when the festival moves, so does the office of executive director Kathy Armstrong. This year, she is renting a small place in Hemisfair Park.

“It’s best for me to be on site, to respond to whatever comes up, from working with the surrounding community and our community partners to overseeing the logistics of organizing and producing the event,” she explains.

In 2015, Armstrong left her position as exhibition director at the Southwest School of Art (SSA) to become Luminaria’s first, and so far, only paid executive director. In that capacity, she works with “a very small staff and an army of volunteers” and loves every minute of it. “I like a challenge and an opportunity to grow,” she says. “I had volunteered with Luminaria for several years and was exposed to so many artists working in all kinds of media, well beyond the visual arts that I exclusively worked with at SSA. Luminaria is the only event that brings together all the arts. I had a huge respect for what all these artists had done over the years and for the history of the event.”

In fact, she has been part of that history since 2011, when she served as a volunteer curator for one of the shows, which gave her a taste of what Luminaria can do. “It was so much fun to work on it, with the focus on making it experiential, allowing the audience to see the art-making process right there,” recalls the soft-spoken director, who says she was an art photographer at one time but no longer “practices.” She also served as a volunteer associate artistic director in 2013.

Initiated by former mayor Phil Hardberger, Luminaria started as a single-night extravaganza inspired by La Nuit Blanche, a similar city-wide night fest in Paris. It has since become a nonprofit organization, though it still enjoys a solid support from the city’s Arts & Culture Department. According to its website, since inception, 3,000 artists have taken part in the festivities, presenting 1,200 visual arts Installations and 900 performances, for a collective audience of 1 million people. This year’s 10th anniversary fest is scheduled for Nov. 9-11, with the outdoor free art fair taking place on the 10th.

About 50 “amazing” art groups will participate, selected from about 150 submissions. Among them are both local and national and even international artists, including groups from sister cities in Spain and Namibia. The latter is sending us a band from the sister city of Windhoek, while the visual art group from Spain, known as the Reskate Arts & Craft, will create one of its glow-in-the-dark murals revealing hidden images visible only at night. A more traditional muralist, Gera Lozano from New York, will work on a permanent mural that will stay in the park. Other visual artists of note are nationally recognized Michael Menchaca, who plans to create an installation on one of the historic houses on the grounds, and Jared Theis with partner Sarah Cox, both accomplished, innovative artists and collaborators on a new stop-motion film. Then there are the music acts, the flamenco and modern dancers, new theater pieces, even an interactive poetry installation by San Antonians Melanie Robinson and Claudia Cardona. And that’s just a sampling of the rich array of offerings.

Since she took the helm of the organization, Armstrong has introduced some ticketed events, such as a VP preview, brunches with artists and a closing party, all necessary to defray the production costs of the festival. She also assembles an annual Artistic Advisory Committee charged with selecting what will be presented. “I work hard to pull together people (committee members) who represent different art forms and the community as a whole,” she says.

“Luminaria gives artists the space to experiment and collaborate and create cutting-edge pieces, and they often go on to perform or exhibit these works in other venues afterwards. We give them a chance to try something new that may also lead them in a different direction in their artistic development,” explains the director. 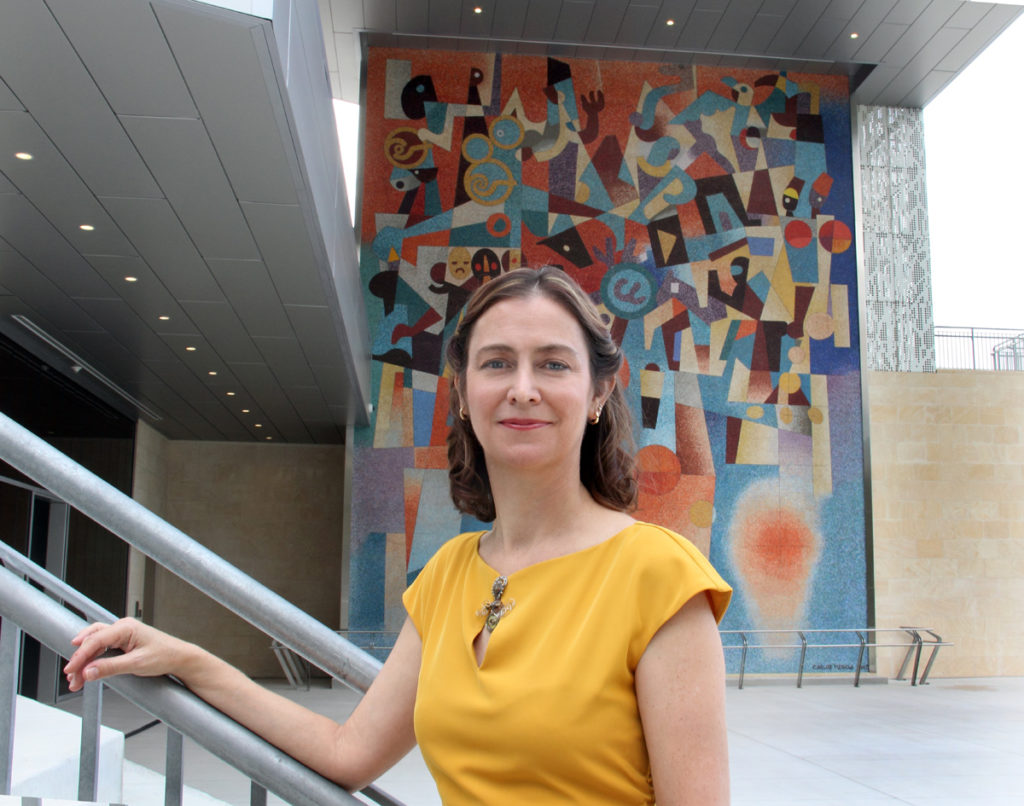 A Philadelphia native who also lived in Europe during parts of her childhood, Armstrong grew up with a feminist activist mother who was involved with the Family Planning Council for Southeast Pennsylvania and discussed access to reproductive health services for poor women at the dinner table. This influenced the young Kathy, but more about that later.

Armstrong attended Smith College, where she majored in studio art and minored in film, and later received a master’s in fine arts from the University of Arizona. Her photographic work was featured in galleries in Tucson, Durham, N. C., and San Antonio, and she also held several jobs as curator and teacher between 1989 and 1997.

Armstrong is married to occupational therapist Chris Gilles with whom she has two children who are now young adults attending colleges in Rochester, N.Y., and Portland, Ore., respectively. What brought the family to San Antonio back in 1996 was her first job at SSA as an instructor. In 2008, she became the director of exhibitions in charge of selecting artists and curating exhibitions, as well as overseeing the departmental budget, outreach and special programs

Along the way, the family took a big break from the American work-centered culture by spending more than a year in New Zealand, where they could experience a better balance between career and family life and get acquainted with different cultures. The trip was also a way to challenge themselves by moving away from the known and familiar. “I loved New Zealand” she says.

This is clearly a woman who doesn’t shy away from challenges. Following in her mother’s footsteps, Armstrong is a board member of Planned Parenthood South Texas, and is, in fact, its current chair-elect. “It’s a politically difficult time for us because the government is cutting funding, but we are responding to that,” she notes. “We are expanding our services — birth control services, basic health screenings, teen pregnancy prevention, treatment for sexually transmitted diseases — for the people who need them the most. It’s an issue of access to reproductive health care for women.” She even organized other artists to take part in advocacy events in the past.

In a few months, she will be looking at yet another challenge — the 2018 Luminaria, which will be different from all previous ones. With everybody else in San Antonio, the festival plans to mark the 300th anniversary of our city’s birth, and artists will be asked to create work relating to that theme. Building an archive to preserve the history of the event is also on her agenda. And then, she plans to organize and enjoy many more Luminarias. “Just watching a multitude of projects developing from concept to reality is really exciting,” says Armstrong. “Luminaria wouldn’t exist without the caliber of artists we have here in San Antonio.”