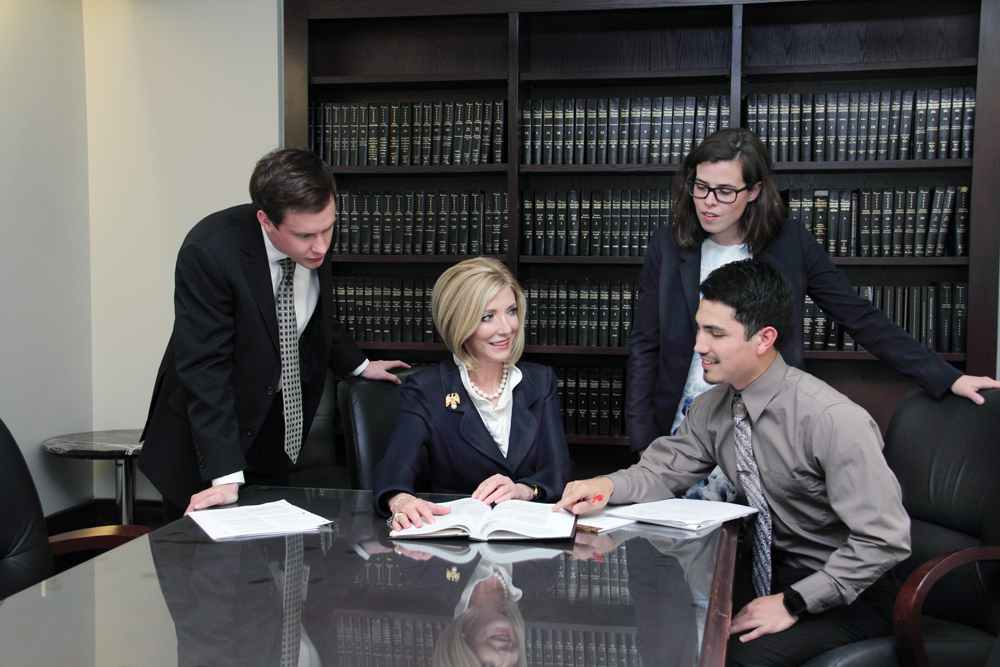 A murder case and a domestic violence dispute are a normal part of a work day for Sandee Bryan Marion, the chief justice of the Fourth Court of Appeals, located in San Antonio. On May 16, she and two of her colleagues spent the morning hours hearing the oral arguments presented by lawyers on both sides of each issue.

In the murder case, the original defendant claimed that his right to be represented by a legal counsel of his choice had been denied by the lower court, while the husband convicted for assaulting his wife questioned whether the trial court jury should have been allowed to hear the tape of his wife’s 911 call. The complex arguments had to do with the right of the accused to cross-examine his accuser and the fact that he couldn’t do so because the wife did not testify in person. A secondary issue was involved as well.

“The lawyers submit written briefs to us, and we read about the cases in advance and look at cases that they are relying on to make their arguments,” explains Justice Marion, who was elected to her position as chief justice in 2014. “The hearings are an opportunity to question the lawyers about the law as it applies to the facts of the case in order to better understand their positions. Upon the conclusion of oral arguments, the panel of justices goes into a conference to discuss the cases and rule on them.”

The Fourth Court of Appeals has jurisdiction over 32 Texas counties and hears some 1,100 appeals per year. That covers a lot of both civil and criminal ground, and the litigated issues range from plastic-bag bans that merchants dislike to all sorts of vile crimes except the ones involving capital punishment. A lot of cases are relatively straightforward, but some may require digging deep into the intricacies of the law.

A case Marion remembers as a particularly challenging one involved the question of underground water ownership and the right of a pecan grower to sustain his business by watering his trees as necessary. That right was jeopardized by watering restrictions imposed by the Edwards Aquifer Authority, aiming to save water resources for the greater good. It was determined that the landowner owned the water on his property and that the restrictions amounted to a governmental eminent domain takeover. Marion’s panel sent the issue back to the trial court with instructions on how to calculate the “just compensation” due to the grower. The Texas Supreme Court let the ruling stand. “It was a fascinating issue because you had the landowner’s rights versus the public interest of water conservation,” notes Marion.

Clearly, the justices’ rulings affect people’s lives deeply. Marion acknowledges the serious responsibility involved. “Sometimes it is very difficult,” she admits. “But I study each case in depth and consult with my colleagues and the staff lawyers… It’s a very collaborative process. On a really difficult case, I tend to set it aside for a while to think about it, and then I go back to read more and really research the law. And there were times when I felt that the law should be changed, but all judges take an oath to follow the law, so that’s what I do.”

Known for her calm and dignified demeanor in court and otherwise, the justice expresses herself carefully, speaking in measured cadences. But she allows a bit of enthusiasm to sneak in as she describes her satisfaction with her present job. “I love being on the appellate court because of the challenge of putting the puzzle together on each case: trying to make sure that in this fact scenario we must apply this law, and making sure that we are doing it properly. I find that challenge fascinating. As the chief justice, however, I have another and equally invigorating challenge – being the administrator of the court. We have seven judges, 15 lawyers and lots of clerks, and it’s rewarding to work with so many smart, independent-thinking people.” As part of her new duties she appears before the state legislature for various hearings, which she also considers important and rewarding. 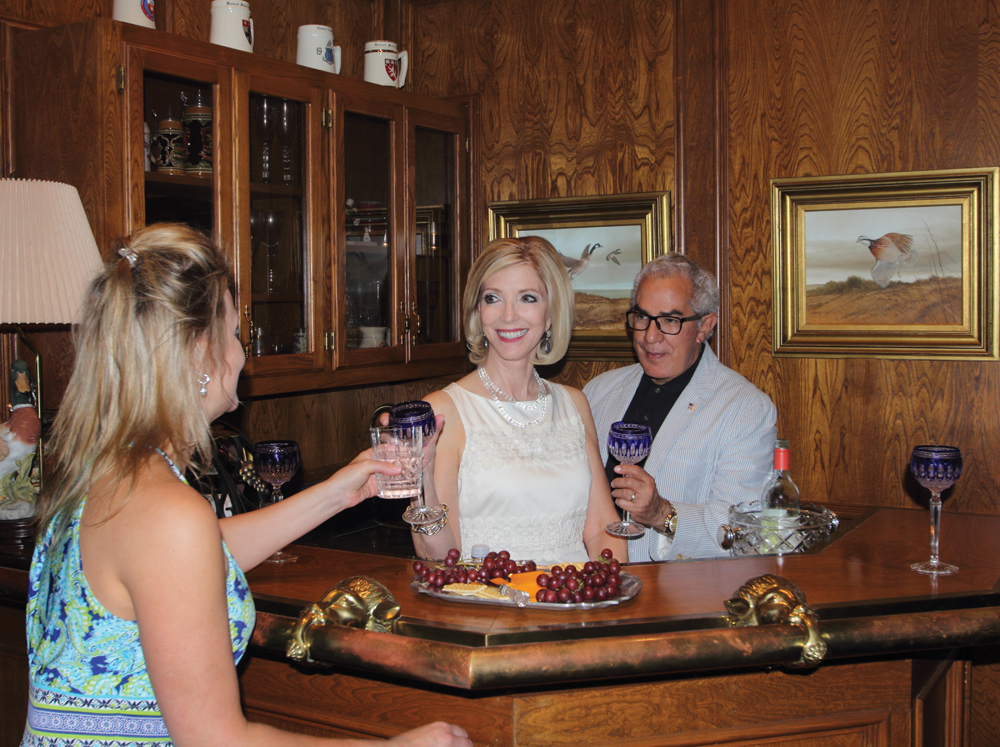 As a high school student, San Antonio-born Sandee Bryan thought she would be a Spanish teacher. Not only did she love that language, but upon visiting Mexico with her Spanish Honorary Society, she also fell in love with the Mexican culture and people. Then, while pursuing her Spanish language degree at UT Austin, she abruptly decided to go to law school. To this day, she can’t explain how exactly this came about, but she points out that “excellent grades” helped her get into St. Mary’s Law School, her father’s alma mater. After some early misgivings, dad became quite supportive and paid for her schooling.

From there on, it was pretty much smooth sailing. Upon graduation, she joined Hollon & Marion in Boerne, married partner Ed Marion and had her only child, Natalee, now also a lawyer. The small-town setting gave her a chance to handle a wide range of cases, which built up her professional confidence. In 1986, Marion moved back to San Antonio, where she became a partner in the firm of Goode, Casseb and Jones before setting her sights on a judicial career. The event that ignited her desire to be a judge occurred one day while she was sitting in Judge Robert Barton’s court in Boerne, waiting for her client’s hearing. Instead of mentally reviewing her own case, she paid close attention to Barton’s moves in the unfolding trial. It surprised her that the judge ruled in everything the way she thought she would have ruled had she been in his place. Maybe I could be a judge, she thought.

It took seven more years, but that was the spark that eventually led to a 25-year judicial career that began with her election to the probate court bench. Though she lost her first race against a Democratic opponent, victories followed, sometimes simply because she had no opponents. A jurist with an excellent reputation, in 2002 Marion was appointed to the Fourth Court of Appeals, and in 2014 she “made history,” (according the Express-News) when she became the first Republican chief justice ever to be elected to that court. It’s notable that all current justices on the Fourth Court are women.

“We first became an all-female court in 2005,”notes Marion, “and then-Chief Justice Alma Lopez was so proud of us that she wrote a letter to Oprah telling her that we were the first all-female court in the country and that she (Oprah) should do a feature on us. Now we are all-female again.” She sees no difference between men and women when it comes to judicial work, but women talk and bond over different interests in their downtime, she says.

Though her campaigns were clean and relatively painless, she agrees with folks who believe that judges should not be elected along party lines, yet she recognizes that Texans are not likely to give up the right to select their judges anytime soon. She’s a proponent of eliminating straight ticket voting, which often pushes good judges out of office simply because voters may be in the mood for political change at the top.

In addition to her work and family life, Justice Marion highly values her membership in the Rotary Club and the many service projects she has been involved with through the club. Her face literally lights up as she speaks of mentoring young girls and following their progress through graduation. “All of mine have graduated,” she says proudly. The club expanded her horizons in many ways and connected her with interesting people she would not have met otherwise. In 1998-99, she served as the organization’s first female president. “It has been a huge part of my life,” she says. In fact, Marion is in the picture that you see when you access the local chapter’s “About Us” online section: four men in dark suits and the always-elegant judge in a red one.

For the past 23 years, Marion has been happily married to her second husband, Dr. Homero Garza, whom she met when their respective daughters were in the same third grade class. The couple enjoy getting together with their large extended families on holidays. The Garzas usually prefer to relax by exploring area restaurants, maybe chatting in Spanish, which is his first language.

With her term on the Fourth Court of Appeals ending on Dec.31, 2020, Marion is contemplating retirement, though a small window is left open for a possible change of plans. “A lot can happen between now and then, but if I had to make a decision now, I think I’ll end my career on a high note. I have by far exceeded all my expectations . . . I hope I’ll be remembered for really appreciating and following the law and setting an example in the judiciary for being patient, dignified and respectful. Many have done this before me; I just hope I’ll be remembered as one of them.”