Karen Kosub points to two sets of doors that mark the entrance to the Bridge to Rediscovery at the Forum at Lincoln Heights. Intended for the residents’ security and to prevent them from wandering off, the two doors are also symbolic of how visitors should mentally prepare to enter the unit. To be admitted, visitors must ring a doorbell, and a staff member lets the visitor in, sometimes even with the help of a resident, greeting you to their “home.” As visitors enter through the first door, they leave their rational world behind and then enter through a second door and into the residents’ world.

I experienced this when I recently visited the Forum at Lincoln Heights. Upon entering, I observed one of the residents as he held a green plastic doughnut over a fat conical peg and hesitated, unsure whether it fit there or on another peg holding plastic squares. Nearby, a group sat in a line of chairs listening to a woman telling them a story. A couple of them dozed. 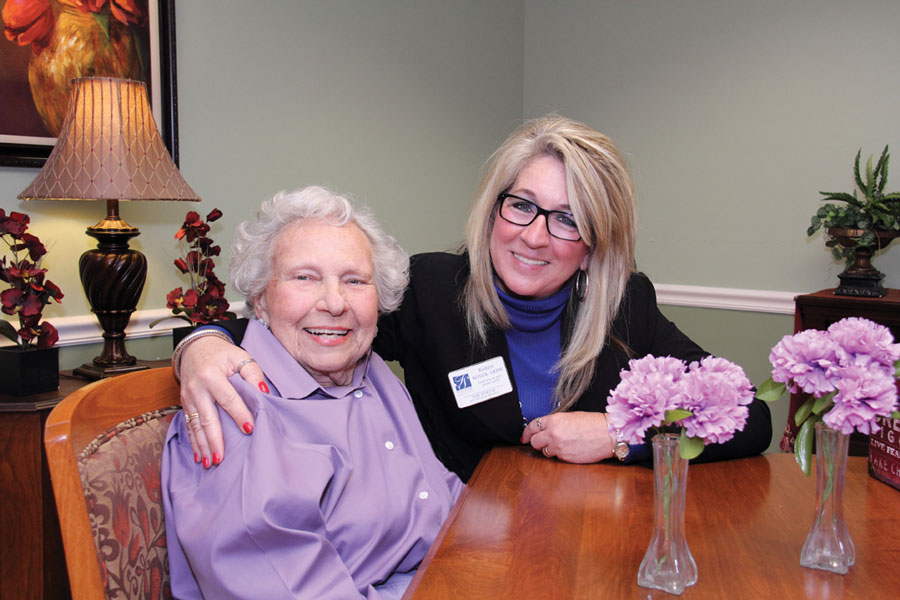 The scene could have been a pre-K activity room of toddlers grasping the basics of the world into which they’d recently been born. But in this one, the participants are at the other end of the life span; it unfolds daily at the Forum at Lincoln Heights Alzheimer’s and Memory Support program. (To a visitor, the well-known illustration of human development sprang to mind — the march through time from infancy to erect adulthood and then gradual collapse back to infancy.)

While similar scenes play out every day in San Antonio’s other 60 or so memory care programs, the Forum at Lincoln Heights approach is unique. Karen Kosub, the Forum’s resident service director and a licensed social worker, says its Bridge to Rediscovery is the only program that employs the Montessori educational method in working with Alzheimer’s patients and those suffering from other types of dementia. (Varieties and causes are described on the Forum’s website.)

For instance, a resident can paint a watercolor — or a picture with pudding, if that’s what they’re capable of — for as long as they want. “As long as they feel good, it doesn’t matter,” Kosub says.

If they don’t enjoy an activity, they’re free to quit so long as they stick with it for at least five minutes. The goal is a feeling of success in the resident as opposed to frustration, isolation, confusion or other hurtful emotions tough on them as well as on families. While Alzheimer’s and dementia sufferers cannot regain memory, the Bridge to Rediscovery program attempts to build success by connecting with a resident’s own life.

Kosub has been working in the field of elder care for 40 years, starting as a high school volunteer at a VA hospital near Buffalo, N.Y. She moved to Fort Worth in 1995 and began at the Forum in 1999. Since moving to San Antonio, she has served on the board of directors of the Alzheimer’s Association’s local chapter and, in 2007, was one of three professionals of the Forum’s parent company, Five Star Senior Living, to be trained and credentialed in the Montessori approach to working with memory loss.
She introduced the method to the Forum that year and continues to train others.

“I just like taking care of older people,” she says. “It’s my calling.”

Key to entering the life of a person who’s suffered memory loss are sensory cues, such as familiar objects, music and aromas. In the hallway of a residential wing, a (non-working) pay phone hangs on a wall and a fireside chat-style radio plays during meals, which are served on good old-fashioned Fiestaware. The staff bakes cookies and pops popcorn for their homey aromas and flavors. Before dinner, everyone sings patriotic songs whose words are known to all. Over time, the songs, along with warm washcloths, signal time to transition to the dining room.

In an individualized effort to help residents feel successful, families provide photos and objects from the patient’s earlier life for creating a personal “memory box” used to evoke response or just the delight of familiarity. Besides giving staff members tools to connect with the patient and his or her past, the box gives family members something to talk about with their loved one so visits will be more enjoyable.

But as the disease progresses, patients may stop talking altogether. Longtime San Antonian Loreta Lee says her sister, Margaret Cox, suffers from advanced Alzheimer’s disease in addition to having broken her hip in 2013 while living at a different nursing home. After being in hospice for 10 days, she moved to the Forum and didn’t speak for six months. She was withdrawn and lifeless. Her move to the Forum changed her life.

“The staff at the Forum has helped her, paying attention to her,” Lee says, “so during the day she’s been able to move from a small room where stories are read to the larger room with more residents. She can’t take part in the activities herself, but she enjoys watching the others. Sometimes she’ll say a word.” Now, she is aware and responsive.

Since dementia progresses at different rates, the staff stimulates residents’ curiosity with walks, bus rides and parties in other parts of the Forum. Special activities are planned daily. Among them, a Happy Trails Visit in which animals are brought in, Blast from the Past discussions, flower arranging and, in the courtyard, Dig and Find, when residents dig up items the staff has buried. “They’re conversation starters,” Kosub says. “The point is to engage them.”

As the disease advances, residents prefer to stay in the place that has come to feel most safe – the Bridge to Discovery wing. A courtyard garden with a walking path for the exclusive use of memory care residents prevents them from feeling confined.

Of the 28 current residents of the Forum’s Bridge to Rediscovery program, about 90 percent are women. To make the five men feel like less of a minority, the staff hosts special events for them a couple of times a month. With help from male maintenance workers, for example, the men have played sports trivia with beer and pretzels and celebrated Father’s Day together with grilled steaks in a separate area of the Forum. The men’s group also has set up a putting green and had young men from local colleges visit and lead a Trivial Pursuit-type interaction.

“Off the record, they also like the ladies’ tea parties, mainly because of the cookies,” Kosub says, laughing. She notes that lessons learned first in life stay the longest with a person. “These men learned manners early, and they still are very mannerly around the ladies,”
Since dementia takes a toll on family members, the Alzheimer’s Association sponsors six family support groups throughout San Antonio and its outskirts. The North Central San Antonio group has met at the Forum since 1999.

Working patiently with elderly people isn’t for everyone, Kosub points out, so she hires staff members not necessarily with experience but “with a big heart” who can be trained. She herself not only manages the memory care program but also assisted care for a total of 58 beds. It’s a lot of work but gives a lot of gratification.
She explains, “What you get back from people — well, I can’t say better than a paycheck because we have to pay our bills — but it’s the biggest payment you could ever have, working with these people and making somebody happy. If you can go home and say, ‘I made somebody’s day today,’ that’s a big paycheck. That’s a big paycheck.”