Abbi Walker grew up singing in church choirs, but when she decided to make singing her career, she chose a very different music genre — her own brand of country tinged with Southern rock and a bit of soul here and there. Her recently released second album, Fiesty, sizzles with assertive, dynamic numbers that both move you and make you want to move. In a letter to this magazine, the singer/songwriter described the album as “most definitely a record for women, more specifically it’s for Texas women… 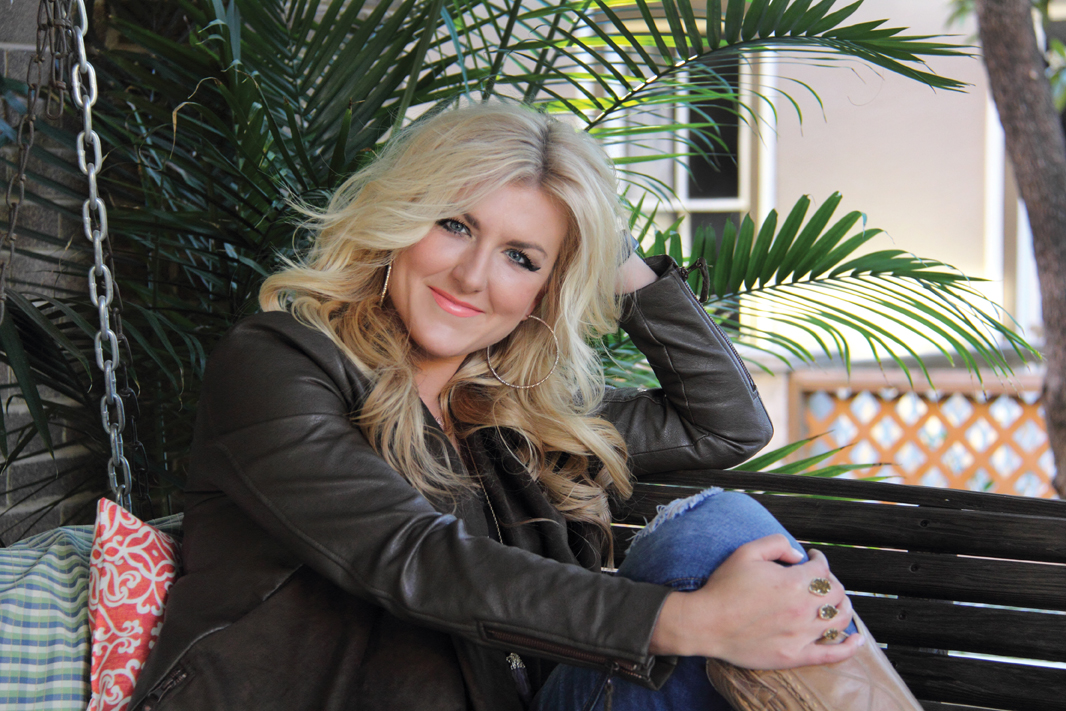 “I am first-generation Texan from both sides of my family. My mom is from Oklahoma, and my dad is from Mississippi,” explains the tall, blond Walker, who indeed looks like a Texas gal. “I didn’t realize how much Texas had shaped my life until I was older and moved away… I grew up listening to strong female singers, but now Texas country music is totally dominated by men. On the top 100 charts, maybe 10 percent are women. So it was important for me to present music written by a woman for women who are one half of the market. Texas women have a strong Texas identity. It’s a sisterhood.”

The sisterhood, and other fans, got to know Walker through her live shows as well as her first six-track record, Kiss Kiss Bang Bang, which featured the song, Southern Soul, that made it into the top 20 on the Texas Country Radio Chart. Live performances regularly take her all over Texas, including memorable gigs at the San Antonio and Houston Stock Shows and Rodeos. In Houston, Walker was the only female act last year to headline a concert at the famed Hideout Club, which is known for spotlighting the best bands in Texas. “That was a really big deal,” says the artist, who followed Miranda Lambert’s touring show. She will also appear at the 2016 San Antonio Rodeo (see box).

Fans also helped fund the production of Fiesty through an IndieGoGo campaign, which raised $20,000 for the project. All the songs except the old hymn, All is Well, are written by Walker in collaboration with her husband, Ryan Petkoff, or the producer, Rick Alvarez, who also worked with the Dixie Chicks. Fiesty was recorded in San Antonio in Alvarez’s studio with some of the best musicians around, including Texas country legend Lloyd Maines.

The title Fiesty reflects her personality. “Oh, yes! My family says I have always been ‘spirited,’” she explains, laughing. “I am a strong, feisty person.” A Dallas Observer writer got that message clearly when she described Walker’s style in this way: “Vocally, Walker sounds as Texan as they come, and the take-no-shit Southern woman attitude is on prominent display.” The article went on to say that several of the Fiesty tracks could rise to the top spot on the Texas Music Chart.

To help that happen, the talented songstress works hard on promotion, too. Given that the radio station DJs pretty much control what the public will hear, she recently embarked on a grueling four-state trip to visit as many stations as she could, driving thousands of miles while subsisting on Subway sandwiches. “It was a huge learning curve” for her. One thing she will not do, however, is change her music to fit the commercially popular trend. “You want to be liked and you want your music to be played, but if it comes at the cost of artistic authenticity, then what have you gained?” she wonders. “One of the reasons I write my own songs is because I know what I want to say. I can’t sing what I don’t believe in.”

Finding Her Own Voice
Although born in Amarillo, Walker grew up in Alamo Heights, the oldest of Baptist minister Dr. David Walker’s three children. Our interview takes place in her parents’ new home on Summit Avenue, in a room dominated by the imposing head and mighty horns of King Edward the Elk, shot many moons ago by her father. All the men in the Walker family are hunters, she says. King Edward has been a steady presence throughout her childhood and adolescence.

Her musical education started at her grandmother’s knee, as grandma Jane Walker — who with her sister sang in Campus Crusades all over the U.S. — played the piano and encouraged the very young Abbi to sing along. Then came the church choirs and the study of classical piano. What she learned from choral music, she notes, is how to incorporate harmonies in the songs she writes today. Music took a back seat in college, however, as she opted to major in marketing and pursued marketing jobs for a while.

Still, she could never completely stay away from the thrill of live performance, which has always had the power to make her feel fully alive. She remembers even enjoying the shows she and her sister put on “for the squirrels,” when they were little, with fake microphones in their hands. Not surprisingly, Walker recorded two gospel albums before she ever thought of going country, and was, in fact, invited by a Nashville label to work on a new one when the financial markets crashed in 2008 and the offer was withdrawn. As years passed, she found herself increasingly drawn to country music.

“It’s the most authentic genre. Country music sings about real life. I also liked how the CMA Awards showed respect for faith and family. That’s what I wanted to be associated with,” says the artist.

Yet it took her a while to find her true voice. Life as a preacher’s daughter had imposed a certain pressure on her to behave like a gentle, Godly woman. “I spent 25 years of my life terrified of what people thought about me,” she explains. “I followed the rules and became subservient. I didn’t know how to harness my energy. When my dad once said that I had a racehorse kind of personality, I heard it as a condemnation.”

Fortunately, Walker eventually realized that spirited women like herself have always been part of country music. The first time she performed her own material was scary, but bythe end of the show, “I loved it.” Being herself and singing heart-crafted stories is what she was meant to do.

“I’ll be me and you’ll be you (the audience), and we’ll be fine,” she concluded.

Having other women identify with her songs means a great deal to her. Eschewing the almost formulaic love songs that dominate so much of popular music, she writes lyrics that amount to a proclamation of independence: Don’t be afraid to show the world who you are, get out of toxic relationships, don’t let rules suffocate you, and don’t let anyone stop you from pursuing your dreams.

Her own dream right now is to someday pack arenas and help women empower themselves, one show at the time. “I want to be an arrow of hope,” she notes.