Mapping out the sauciest little barbecue joints in Texas!

Throw a dart at a Texas map, and you can be sure it will land, bull’s-eye, on a town with some great old-time
Texas barbecue joint — a place that someone will undoubtedly claim has the best barbecue in the state.

Go to any such barbecue joint, be it in Lockhart (the self-proclaimed “Barbecue Capital of Texas”),
the Highland Lakes area or the Hill Country, and soon you’ll be standing knee-deep in spare ribs,
leaning over slabs of brisket laid out on butcher paper and licking barbecue sauce off your wrists—
and be careful not to burn your boots when stepping over a fire pit in the floor.

Barbecue joints that I love best are imbued with an elusive Last Picture Show quality that seasons the experience like a black-pepper rub on a brisket. A place can have the most tender barbecue, but if folks don’t stand in line for it in an old store-front building with a squeaky screen door, a water-cooler hanging from the ceiling, neon beer signs on the walls, a parking lot full of mesquite wood out back and a fire crackling in the floor, it’ll never get on the barbecue map of Texas.

Texas is “barbecue central,” and so our list begins at the heart of it all in Austin. After that, it’s a short drive to small towns that spoke-off in all directions from there — places like Taylor, Driftwood, Lexington, Luling and Lockhart, where city slickers and Texas “kickers” concur the best barbecue begins. 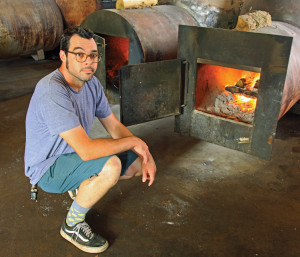 Owners: Aaron and Stacy Franklin have been smoking meat in Austin since 2009 (they started with a food truck).
Atmosphere: East-Austin-style laid-back with long lines down the block; people in lawn chairs playing cards and drinking beer while they wait.
Barbecue: Possibly the most tender, fall-apart on your fork, melt-in-your-mouth barbecue in the U.S.A.
Side dishes: Potato salad, slaw and pinto beans—super simple.
Who eats there: Everybody. Even President Obama has eaten here — as has just about every celebrity who’s ever been to Austin in the past five years. Hipsters heart Franklin Barbecue, too.
Sauce: Yeah, they serve it—but it’s not big on Franklin’s list of priorities. It’s all about the barbecue, you know.
We love it because: Franklin’s meat is smoked much more slowly than that of many other places, so it’s always extra tender.
Downside: You have to get there before breakfast for even a chance of getting lunch.
Best in the state: Arguably, yes. 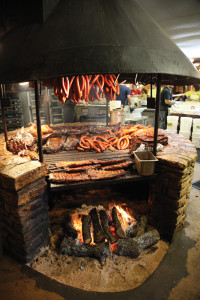 Owners: The Roberts family
Smoking meat here since: 1967
Atmosphere: Laid-back and “keep Austin weird” friendly.
Set in the country outside town.
Barbecue: Big portions served family style—the smoked turkey and chicken are always a hit.
Side dishes: Big rings of sausage and generous sides of potato salad.
Who eats there: Celebs like Sandra Bullock and Matthew McConaughey, who are sometimes spotted here, and Austinites who don’t think anything of the 20-minute drive to Driftwood consider it an “Austin tradition,” even though it’s not actually in Austin.
Sauce: Zesty and sweet; mustard-based.
We love it because: We can sit outside in the shade of enormous oak trees and bring our own beer and wine—even a giant ice chest full. Live music under the stars—how very Austin of them.
Downside: Long hot summer waits, though you can sit at picnic tables outside.
Best in the state: It’s still a contender.

Cooper’s Old Time Pit Bar-B-Que
coopersbbqllano.com
325-247-5713
Owners: The Wooten family
Atmosphere: Casual and comfy as a pair of old, worn-out cowboy boots.
Barbecue: Known for their “World-Famous Big Chop” pork chops, they also serve brisket, cabrito, chicken and more.
Side dishes: The usual suspects: beans, corn-on-the-cob, coleslaw, potato salad, baked potatoes.
Who eats there: Hill Country and Highland Lake-lovin’ locals who like Texas-sized pork chops and other tender slow-cooked meats.
Sauce: Cooper’s own “barbecue dipping sauce” is tangy, zesty, and full of flavor—and they sell bottles of it to take home, too.
We love it because: Cooper’s has branched out to locations in Fort Worth, Austin and New Braunfels, AND they serve blackberry, peach, pecan and apple cobbler at all these locations.
Downside: The original Llano location we love is just a little too far from San Antonio.
Best in the state? Some would say so.

Smoking meat on this spot since: 1900 (Note: The place was renamed Smitty’s by the late owner’s daughter after she and brother Rick had a feud/split in 1999).
Owners: Nina Schmidt Sells and son John Fullilove. (Nina is the daughter of Edgar Schmidt, who ran Kruez’s on that spot since 1948). 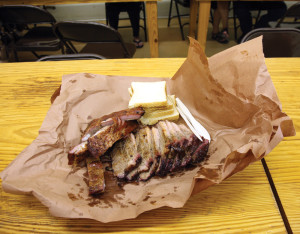 Atmosphere: The best in Texas, bar none. A long room of smoke-stained walls still has little chains nailed to them where butcher knives were once attached “so people wouldn’t walk off with them or get stabbed in a fight,” says Nina. A local post oak fire blazes in the ground, enveloping you in smoke while you stand in line for meat. The parking lot is a sea of chopped wood.
Barbecue: So good that for years the owners refused to serve sauce—didn’t want it interfering with all the rich and subtle flavors of the meat slow cooked over an open post oak fire. Seem extreme? Yeah, but the brisket is that good.
Side dishes: Whole loaves of white bread, raw onions, Saran-wrapped slices of cheddar cheese, pickles and whole avocados—for starters.
Sauce: Zesty and tart (if you ask for it, they’ll serve it—but only under duress).
We love it because, like most Texans, we’re loyal: Barbecue has been smoked on this spot for more than a century. A family squabble forced a name change (Kruez Market to “Smitty’s”) when a sibling opened a new barbecue joint under the old name (though they claim to just run their same business in a new location). Either way, the name changed, but the quality didn’t. Locals took sides in the split, and many refuse to patronize the new Kruez Market. Some folks still call Smitty’s by its former name only to sigh and say, “I mean, you know, the old Kreuz’s.” Nice also that it’s open on Sundays.
Downside: Long lines out the back door.
Who eats here: True BBQ aficionados. Celebrity chef John Besh of New Orleans says he loves this place.
Best in the state? Quite possibly, yes. 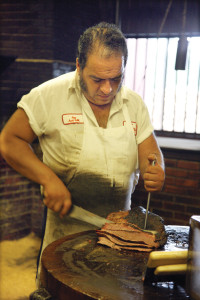 Smoking meat here since: 1999, this building; at “Smitty’s” location since 1900.
Atmosphere: Won’t wow you. Big metal building.
Barbecue: Better than I’m willing to admit. Try the zingy jalapeño cheese sausage.
Side dishes: Beans, sauerkraut and more.
Sauce: None. Ever. Won’t have it.
Downside: They barbecue their meat faster than most (in four hours). No BBQ sauce—bummer. Closed Sundays—bummer.
Whom you’ll see there: Austinites and those who side with the son in the family feud.
We love it because: They carried burning coals in a steel tub from their original location so they can say they cook over the same coal fire their granddad did.
Best in the state? Some say so.

Owner: Buddy Ellis, (Joe Capello, Sr., pit boss)
Atmosphere: Small-town Texas, a slice of Americana.
Barbecue: Tender, marbled but not too fatty.
Side dishes: Potato salad, beans, cheese, pickles, white bread, Big Red and root beer in bottles.
Sauce: Zesty and sweet—spices float to the top—my favorite. (Note: For years, I’d pick up sauce from here and then drive 15 miles farther to Smitty’s because my favorite BBQ place didn’t serve sauce). Lucky for me, they sell the sauce by the cup, pint and even the gallon in Styrofoam containers.
We love it because: Luling is home of the “Watermelon Thump” festival.
Who eats here: Locals, farmers and everyday folks from San Antonio, Austin, Houston and beyond.
Downside: Long lines, busy at lunchtime; closed Sundays.
Best barbecue? Pretty darn close to it.

Story and photos by Janis Turk