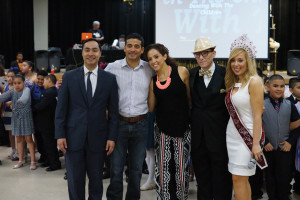 In late May, I attended the Edgewood ISD Dance Finals Competition, featuring third-graders who had been practicing ballroom dancing all year. It was a most wonderful and heartwarming event.
Assembled at the Neighborhood Place on Rivas Street were the dance champion teams from six Edgewood elementary schools, their parents, supporters, dance teachers, celebrity judges and public officials, including Rep. Joaquin Castro and District Attorney Nico LaHood and his wife, Davida, who both served as judges.

At some point, the legendary Lola Falana made an appearance and addressed the kids. While TV cameras recorded the proceedings, it seemed like everyone in that ballroom had a permanent smile on his or her face as the dressed-up little dancers showed off their tango and merengue moves. After three couples were proclaimed third-, second- and first-place winners, all present were invited to join the Family Celebration Dance, and almost everyone, including yours truly, did. We just abandoned ourselves to the joy of dancing.

The district has been offering social dancing classes for several years by contracting with the nonprofit Dance Therapy organization and its Dancing with the Children program, directed by Jorge Alonso Perez. “We are the best-kept secret in San Antonio,” said Perez, who served as one of the event’s emcees. What he and the remarkable dance teachers teach the kids goes well beyond dance steps. Respect for each other, discipline, poise, self-esteem and teamwork are all part of the game. A study by OLLU social science professor Dr. Yolanda Uranga has also shown that the students’ academic performance and school attendance improve considerably. 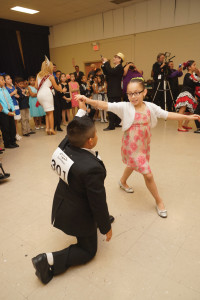 The program is currently looking for funding in order to offer classes to fourth- and fifth-graders as well. Besides being an intrinsically pleasant activity, dancing stimulates the production of feel-good dopamine in the brain, exercises the body and makes social interaction fun and easy. And it’s something that can be practiced throughout one’s life. If Edgewood can do it, why can’t the other school districts? They just may have happier, healthier students!

The other “best-kept secret” may be the San Antonio Film Festival. Though it’s been around for 21 years, it’s not well known outside of a circle of filmmakers and film enthusiasts. Created by film teacher Adam Rocha, the fest is designed to show side by side the work of local, national and international artists, both emerging and established. All formats are welcome — shorts, feature, documentary and animation. The 2015 edition is scheduled for July 29-Aug. 2 at the Tobin Center, with free outdoor screenings and indoor screenings in both the H-E-B Hall and the Alvarez Theater. Tickets start at $10.

Last year, 138 films were screened and some 2,000 tickets sold, the largest number in the event’s history. One of the movies shown has since been picked up by a Hollywood director for further development. This year, the number of submissions has gone up, but at the time of this writing, Rocha and his colleagues were “still working on the lineup.” A trip to Hollywood was in the works “to drum up business.” By July, you should be able to check the fest’s website, www.safilm.com, to choose what you would like to see. Let’s show support for our homegrown festival!

Rebekah Kelso Fernandez is a platinum producing agent with The Mosaic Group at Keller Williams Legacy, where she works on a team with her husband, Art. Rebekah attributes their success to a wealth of experience and to great client relationships, which she says extend...

BEAUTY: Love the Skin You’re In

For most, Winter weather means dry, dull skin. To keep up with changing seasons, routines, diets, and stress, it’s important to make sure your skincare routine stays updated! There’s not a one-size-fits-all solution for skincare woes. Luckily, there is a whole world...

Travel: ​A Trip to the Wayback

​​The Wayback, Austin ​​The tranquility of the Texas Hill Country is minutes from town but miles from ordinary. By Carly Summers & Jenna McElroy  ​​ ​​When traveling from San Antonio to Austin, I always take the scenic route to enjoy the Spring wildflowers,...