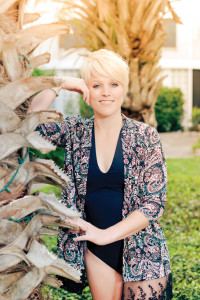 Titleholder shares her journey to become world-class athlete. As a young home-schooled child, Rachelle Simpson aspired to be an Olympic gymnast. She gave up that dream at age 10, she says, adding, “I was a fair gymnast; not great. But I had the mentality.” Now her dream to be an Olympian may be possible in a way she could never have imagined — as a high diver and one of four American women on the USA National High Diving team for Federation Internationale De Natation (FINA). High dive is now an official discipline, and FINA is making strides toward a future Olympic exhibition and then possibly the opportunity of a competition. As a rookie, new competitor Simpson won the 2014 FINA Female High Diver of the Year title and the FINA World Cup in Russia. The road to the high platform and status as a world-class athlete and Red Bull Cliff Diving Women’s World Series Champion titleholder has included 10 years as an aquatic diving performer at entertainment venues including Sea World and a career-boosting stint in Macau in Franco Dragone’s The House of Dancing Water.

It was in Macau that it was suggested she might have what it took to be a high diver. It was an extraordinarily stressful time for Simpson. Her husband, Josh, was in San Antonio transitioning out of the Army and busy rehabbing their home; she was alone in a foreign country, adjusting to a different culture, Cantonese and Portuguese languages, and needing to find housing. There were also the demands of a new, physically challenging job and training in high dive. The stress and intense pressure were manifest in many ways. When Josh finally arrived, he helped her de-stress, adding yoga to her routine and changes to improve her overall health and wellness. Simpson also drew largely from her faith. “God’s the reason I do this stuff,” she explains. “He gave me this talent. I found peace through prayer. It’s why I have the confidence that I do in my sport.” Through the six months of training, Simpson felt the pressure fade: “God was telling me I don’t have to be perfect.” At that realization it all fell into place little by little. “It ended up being such a great thing for us. We realized we can roll with things,” says Simpson, a self-confessed worrier. 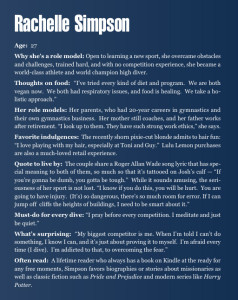 Before she knew it, her high dive performances led to world high dive competitions in Texas, Norway and Mexico, and she was winner of the Red Bull Cliff Diving World Series with three gold medals. Her husband, whom she met in the youth program at their church when they were both teens, are and always have been best friends. The duo also coach children’s gymnastics together. Working and training together is a blessing, “We don’t like being apart. We enjoy each other’s company,” she says. While her acrobatic aquatic and diving performances, (sometimes up to five shows a day) help with her fitness, she and Josh include other activities in her two to eight hour of daily training. “We like to mix things up and maintain well-balanced exercise,” she says. Sometimes that includes competing in off-season tough mudder endurance events and ongoing yoga to aid her flexibility and leanness. With speeds of near 85 mph for her high dives, Simpson has begun strength training. “It can feel like concrete when you hit the water. Training helps me be sturdier,” she says. Cardio workouts increase her stamina, something needed for the competitions that require repeated eight-minute climbs up ladders. The one thing her sport preparation can’t include, unfortunately, is high dive practice. There aren’t any places with platforms high enough to replicate the competition heights or pool depth to accommodate her dives. The lack of facilities requires her to use area pools with 10 meter platforms and divide her dives into two halves. The separate parts require her to use visualization and build muscle memory. She explains, “I’m a big believer that if you can convince your brain, your body will follow suit.”

Why she’s a role model: Open to learning a new sport, she overcame obstacles and challenges, trained hard, and with no competition experience, she became a world-class athlete and world champion high diver.

Thoughts on food: “I’ve tried every kind of diet and program. We are both vegan now. We both had respiratory issues, and food is healing. We take a holistic approach.”

Her role models: Her parents, who had 20-year careers in gymnastics and their own gymnastics business. Her mother still coaches, and her father works after retirement. “I look up to them. They have such strong work ethics,” she says.

What she watches: She and Josh love older shows like their perennial favorite, The Office, which they watch over and over as well as Twin Peaks. They are also fans of the History Channel’s The Vikings. Big-screen favorites include Pride and Prejudice and The Big Lebowski.

Quote to live by: The couple share a Roger Allan Wade song lyric that has special meaning to both of them, so much so that it’s tattooed on Josh’s calf — “If you’re gonna be dum,b you gotta be tough.” While it sounds amusing, the seriousness of her sport is not lost. “I know if you do this, you will be hurt. You are going to have injury. (It’s) so dangerous, there’s so much room for error. If I can jump off cliffs the heights of buildings, I need to be smart about it.”
Three of her favorite things: Rottweiler, Hurley: pit bull mix, Sunny; and a rescue Malamute they brought home from China, Ellie.

Must do for every dive: “I pray before every competition. I meditate and just be quiet.”

What’s surprising: “My biggest competitor is me. When I’m told I can’t do something, I know I can, and it’s just about proving it to myself. I’m afraid every time (I dive). I’m addicted to that, to overcoming the fear.”

Often read: A lifetime reader who always has a book on Kindle at the ready for any free moments, Simpson favors biographies or stories about missionaries as well as classic fiction such as Pride and Prejudice and modern series like Harry Potter.