Margaret Jabour: In the Business of Celebrating Life!

A toast to Margaret Jabour, co-owner of Twin Liquors 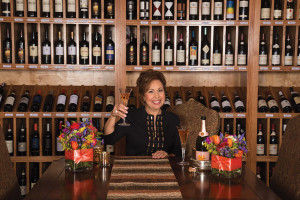 It’s midmorning on a sunny January day, and I have come to the Twin Liquors Marketplace store on 281 near Bitters to meet with the company’s co-owner, Margaret Jabour. No sooner have I approached the sales counter to announce myself than I hear a friendly voice from behind calling my name.
We start our visit by looking around the attractively laid-out store. “We like our stores to have a department-store feel, to be female friendly,” she explains as we pass appealingly arranged island displays in the front, a cafe-like tasting bar area, impressive displays of wines from different regions of the world, and finally stop to peek inside the Fine Wine Room, where special fundraising dinners are held for nonprofits supported by the Jabour family. Then we settle in the education room to talk.

Education of both customers and staff is an important part of the business. Frequent seminars are held on a variety of topics, from Italian wines and cocktail mixology to exploring the stories behind famous spirits and mastering the art of food and wine pairing. The place also hosts visiting winemakers and distillers who present their products to the public. Tastings make all the difference, explains the owner. It’s the same principle that works for cosmetic counters – try it before you buy it. To serve the customers properly, all staff members undergo a nine-week educational course and must pass an exam at the end. Old-time liquor stores didn’t bother with such things, but from the start, Jabour wanted to “elevate the industry,” as she puts it, and she wanted to appeal to women shoppers. And both she and her co-owner brother, David Jabour, visualized their stores as friendly neighborhood hubs where customers and staff get to know each other. The Austin-based chain has 12 stores in San Antonio and the surrounding areas, often near H-E-B supermarkets with which they strive not to compete. “Being in the neighborhoods helps us connect with people,” she notes. “You get to know your customers and through them the needs of the community, and we like to respond to their needs. We never wanted huge, impersonal stores. I want the store to feel like home; I want to host my customers.” The Jabours even design their retail spaces themselves.

Launched in 1982, the family-owned company now has 77 outlets across Texas and is one of only 50 members of the Wine and Spirits Guild of America, which bills itself as “the most influential association of alcoholic beverage retailers in the U.S.” Most of that expansion involved opening new establishments, but Twin Liquors also acquired a certain number of other family-run stores when the owners could no longer operate them. Jabour emphasizes that these owners came to them, rather than the other way around, because they liked the way the Jabours did business. To reciprocate, David and Margaret often kept both the old name and the old look of each place for a time, only slowly integrating them fully into the Twin Liquors brand. The brother-sister duo also nurtures long-term relationships with suppliers, distributors and others in the industry. “It’s like a family,” she states simply.

These kinds of friendly connections are clearly very important to her. In fact, the terms “connecting” and “relationships” pop up throughout our conversation. She’s clearly a people person who believes that God puts us in each other’s paths for a reason. And she tries to incorporate that message whenever she has a chance. “I spoke yesterday at the Texas Business Woman of the Year Award gala, and my topic was how much more could be done if women could connect better among themselves,” she says. “Women are often self-conscious and keep to themselves, yet if we truly opened up and shared with each other, we’d be much more powerful. We could move mountains.” In 2011, she herself was the recipient of this award, given by the Women’s Chamber of Commerce Texas.

All in the family 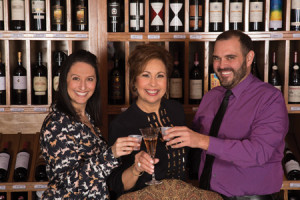 The inclination to put personal ties ahead of cold figures is something Jabour learned growing up in a Lebanese-American cultural milieu and working with her relatives. It was her grandfather, Albert Jabour, and his wife, Mary, who opened the first shop selling dry goods in downtown Austin. Post-Prohibition, the family opened Jabour’s Package Store, a combination liquor- and drugstore with a soda fountain in the back. There were no malls back then, and people actually shopped downtown. After returning from the battlefields of WWII in the 1940s, her father, Theodore, and his twin brother, Arthur, joined their parents’ business. Young Margaret was eager to get involved as well. “I never liked staying home, playing with dolls, so as a 7-year-old I convinced Dad to let me work in the store,” recalls Jabour. “I was a quiet girl, and I worked hard. When I got a little older, I sold toys and drugs. Hanging around the store, you learn the business, and I learned how important it is to relate to people. Dad loved people and always talked to his customers.” At 13, Jabour got a job at a car stereo shop without knowing anything about music, stereos or cars. And at 16, she and another uncle started their own audio electronics operation.

The enterprising young woman was in college studying business management when her father first brought up his wish to retire. Jabour and her brothers — David and older brother Ralph — decided to follow in his footsteps but with a twist: They would take a more upscale approach by selling only premium national brands and wines. “This was 1982, and the industry was not what it is today,” explains Jabour. “Americans were just beginning to understand wines, and Dad worried that we would go broke. But we just said, ‘stay with us’ and opened a 700-square-foot store in a nearby location.” They named it Twin Liquors in honor of their dad and his twin. Unfortunately, not everything was rosy. Ralph, who had contracted rheumatic fever as a boy, died prematurely in 1990 at the age of 35, leaving a devastated family behind. Just a year earlier, Jabour had gotten married. However, the marriage soured rather quickly, leaving her to rear sons Michael and Joseph as a single mother. Following her divorce, she redoubled her focus on the business, and brother David eventually left his banking career to do the same. That’s when Twin Liquors really took off. Today, her older son Michael, 23, already has his own cubicle at the company’s headquarters in San Antonio.

As already mentioned, the Jabours’ passion for connecting extends to the communities they serve. In Austin, the family’s generosity is well known among arts and charitable organizations, and more connections are being built in San Antonio, as well. Altogether, Twin Liquors supports over 500 charitable events a year. In recognition of the siblings’ community involvement, the industry magazine Market Watch conferred on David and Margaret its National Community Service Award in 2008. Though she has no regrets and loves her work, the businesswoman would nevertheless like to have more time to do a few other things, like visiting her ancestral country of Lebanon or going to France to meet in person the families that make the products she sells. “I have always felt I needed to be the mother for my family, for the business, for our industry,” she says. “Maybe now I can get to travel a little.”