Where smoke and beer come into their own 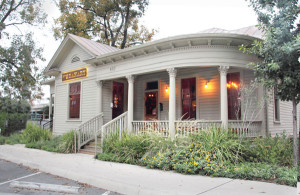 The Granary, once the home of Pearl’s cooper, or barrel maker, occupies one of the few structures of true historic interest at Pearl — not counting the signature brewery itself, soon to be reborn as a spiffy hotel. In summer, the respectfully restored cottage’s wide porches offer diners a shady outdoor option; in winter, eaters are enveloped in a cocoon of warm wood. And at all times, the aromas of meat transformed by smoke pervade the air.

The Ratray brothers have also treated the setting with respect, adding on only where necessary to accommodate the essential apparatus of cooking and smoking (Tim’s domain), and carefully slipping beer-making tanks (Alex’s province) into existing space. By day, The Granary could almost pass for a traditional BBQ joint — but that’s before you start tasting. A pulled pork or chopped brisket sandwich will never seem the same again; burnt-end beans will ruin you for any other version. The amazement of the evening begins to sneak up on the unsuspecting with happy hour. The house’s four beers are on special (flights are also recommended), but then there may be a ringer appetizer such as quickly grilled East Coast oysters with beer foam. Other appetizer specials have included an intensely flavored and beefy short rib given the pastrami treatment with three days of brining and 10 hours of smoking. From the printed, but regularly retooled, menu, an order of smoked and flash-fried chicken wings that appeared to be riffing on the buffalo variety without the blue cheese was less smoky than anticipated; the wings were moist and meaty but more smoke and spice would have been easily tolerated. Serious spice did pervade a patty of Moroccan merguez smacking of harissa and accompanied with strips of smoky eggplant; “quenelles” of savory ice cream provided a perfect, cooling counterpoint. 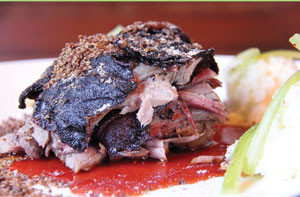 As for the main event, here called “savor,” a beef clod and a barbecue board have regularly been the only obvious reference to the noontime menu; smoked chicken coq au vin that’s not just a gimmick and brisket ramen with smoked shoyu broth given additional depth with house-made ale are more the norm. Smoke-braised pork shank, removed from the bone and topped with what appeared to be shards of deep-fried sauerkraut, also makes use of the house’s excellent brown ale in both braising and the accompanying mustard. A wedge of sautéed cabbage seemed to need something more, however, and finely diced butternut squash didn’t contribute as much as it might have to the equation, but the pork itself was faultless.

So if smoke is not yet in the walls at The Granary, it is already in the “stay,” or dessert, section of the menu. Imagine, for example, its use in the woody-hued caramel served with a peach puff pastry in season. We’re not sure where it might have been present in a superb buttermilk chess pie drizzled with lashings of cane syrup and accompanied by cream Chantilly, but we do like to think that the masterfully flaky crust might have been due to lard — appropriate given the pig image that serves as a symbol. And on the infrequent occasions that smoke is not present (in the past, delicately fried green tomatoes have been enhanced instead with an ice cream inspired by ranch dressing), beer likely will be — think beer and pretzel ice cream swirl with a mustard caramel. Think beer at all times at The Granary, for that matter; the brown ale paired beautifully with the chess pie, and samples provided by a knowledgeable waiter suggested that a pear cider and a blackberry-inflected brew might have worked equally well. 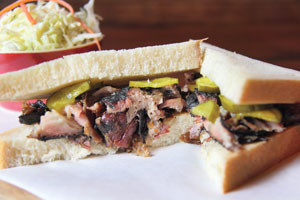 There is, in other words, no end of surprises here — and that includes goat shoulder with farro verde and fennel as well as grey mullet with lime-scented rice grits and preserved plum. Stay curious, my friends.