When and how do you do it? 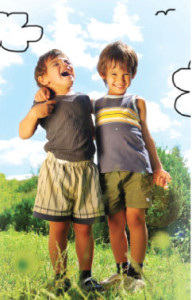 When it comes to raising our two boys, ages 12 and 10, my husband and I often joke that we are “making it up as we go along,” especially when it comes to rules. We have always had a few of what the boys refer to as “the biggies.”  These are the ones with absolutely no wiggle room, and they include things like honesty, politeness and kindness.
It’s the more specific “minor” infractions where we tend to “wing it,”  adding and subtracting from the list as lifestyle dictates.  An unfortunate incident with hot cocoa and a newly upholstered sofa, for example, resulted in a “no eating or drinking outside of the kitchen” mandate.  A broken window earned a “ball ban” in the house. Now that texting has become a part of my pre-teen’s existence, we have instituted a number of “no phone zones.”

Enforcing these rules with our children is easy enough. Violations  result in appropriate consequences that have been clearly defined, i.e., texting after 9 p.m. equates to loss of phone. But while we can set and  enforce rules with our own children, knowing what to do when the violator doesn’t share our DNA is another story. What do you do when
the child breaking the house rules is not your own?

Shape up or ship out
Whenever a child is a guest in your home, the first step is to make sure that the rules are explained clearly and in an age-appropriate manner.
If a child innocently slips up, a gentle reminder is in order. If the mini-rebel continues, you can offer the option to “shape up or ship out.”  This was the case for Linda Gayle* when her pre-teen daughter, Molly,* had  a play date with a girl who began bullying Molly’s younger sister, eventually yelling at the little girl to “get out.”  Gayle quickly defused the situation by presenting the guest with a choice: “I explained to her that her behavior was unkind and that in our home, everyone is included. I then told her that I could take her home if that was not OK with her.  She chose to stay and play.”  According to Helen Huff, an LPC in private practice who specializes in military and family life counseling, Gayle’s response was appropriate. “Once you have explained that these are the rules in your home, you give the child the option of abiding by them or going home. It’s that simple,”  she says.

Calling your bluff
So what do you do if the child calls your bluff by either not correcting the behavior or actually choosing to go home?

“You take him home,” says Huff.

However, this is a situation that calls for the utmost diplomacy, especially if the parent is a friend. Let’s face it, not even your closest friend wants to hear that you think her child is in need of discipline, or worse yet, that her parenting skills could use some work. Defuse any tension with a neutral tone of voice, and an “it could happen to anyone” approach. “You don’t have to be terse,”  says Huff. “Simply explain what happened calmly without confrontation or blame.” You might suggest that the child may be having an “off” day or that “the children” couldn’t seem to get along together. However, if you feel the behavior was dangerous or intentionally harmful, you might have to offer a more direct and specific explanation. Glossing over a child’s behavior in the interest of being polite can sometimes backfire, as mom-of-two Christy Lynn* found out.

“We hosted a child in our home whose behavior was completely inappropriate,” she says. “He bullied my youngest son to the point where BOTH my children requested that he never be allowed to return.” Rather then address the behavior with the child’s mother, whom she did not know very well, Lynn chose to keep it to herself. So you can imagine her surprise when she received a call from the boy’s mother a few weeks later, complaining that Lynn’s son wasn’t playing with her son at school. “That was when I realized I had to tell her what had happened at our home,”  she says. “The other mother was not particularly receptive to the news, but she did back down.”

While this mom may not have appreciated hearing that her child was a less than ideal houseguest, there are other mothers out there who will take the information and use it as an opportunity to address what is, and is not, appropriate behavior. Such was the case when Deborah Montemayor’s teenage daughter invited a friend to sleep over. The guest was disrespectful, barging into the older sister’s room without knocking and exhibiting other inappropriate behaviors. While that was enough for Deborah to raise an eyebrow, the final straw came the next day when the girl’s mother arrived.
“She was rude and disrespectful to her own mother in front of me, and I told her that I would not tolerate that in my home,” says Montemayor. “Furthermore, I explained to both her and her mother that she could not come back until she learned to respect and follow our rules. When she was finally allowed to come back over, she was like a different child.”

Know what to expect
Expecting a child to behave perfectly while in your care is unrealistic. The good news is that most situations can be defused rather quickly and effectively with communication, redirection and a little homework on your part. Do your research and know the families of your children’s friends. Discuss your expectations and ask what they allow and don’t allow in their own homes. If getting to know the other family is not an option, or if you get to know them and are uncomfortable with the rules (or lack thereof) in their home, you don’t have to discourage the friendship. Simply be willing to be the host so that you can monitor the environment. “Our children’s friends raise them to some degree,” cautions Huff. “ The best thing you can do is to try to surround your children with other kids who make good choices.”
*names changed per request