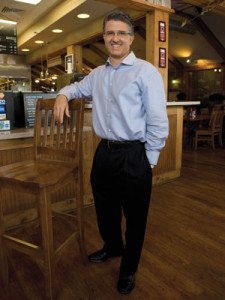 Barclay Anthony’s parents, Dan and Chrissy Anthony, opened the first Sea Island Shrimp House restaurant in 1965 with the help of their friend Henry Reed. Today there are six locations across San Antonio, with the seventh being planned for the near future. The iconic popular chain has been voted San Antonio’s Best Seafood Restaurant by Express-News readers for 10 years in a row, praised by restaurant reviewers, and awarded AAA’s Double Diamond rating for the quality of its food and relaxing atmosphere.
Presiding over this successful growth is one of the founders’ sons, Barclay Anthony, CEO since 1994. During his tenure, the company also developed Tiago’s Cabo Grille with two local locations and extended its interests into commercial real estate. But Anthony is actually a third-generation restaurateur. His Greek-born grandfather, Tom Anthony (adapted from the original Anthonopoulos), was the pioneer who ran the posh Manhattan Café on Houston Street for decades.
You grew up in and around your family’s restaurants. What jobs did you handle?
The first restaurant I remember was the Manhattan Café, where both my grandfather and father worked. I spent time there, played and ate there but didn’t do any work because I was very young then. So the first restaurant that I worked in was the original Sea Island on Rector Street. As a 7-year old, I started washing dishes and bussing tables there. Then I graduated to some kitchen work, primarily peeling shrimp. I would be doing that with my grandmother, sitting in the kitchen peeling shrimp for hours. It was actually fun. When I got older, I went back to washing dishes and cleaning the tables because that’s what was needed. And you had to be real fast. My mother expected us to clean a table in 9 seconds or less.
Did you always think you would be in the restaurant business as an adult?
My parents always steered us (their children) away from the business. It’s a difficult business, and they had had a few failures that took a lot out of them. There was another job I did as a kid that my father made me do just to understand more about the business. One summer I worked at Polunsky’s Fish Market, a job I did from 5 a.m. till noon, working in a refrigerated room scaling fish. That was tough. I was cold to the bone; couldn’t warm up.      When time came to go to college, I went into a totally different field, became a financial analyst and worked for Bear, Stearns & Co. in Dallas for two years. I was expected then to return to graduate school to get my MBA and was already registered at UT when I got a call from my mom, who sounded very distraught. They had opened up a second Sea Island and she was upset that the standards were not being met. My father had fallen ill, and she couldn’t take care of everything by herself. They were thinking of selling the business. I was in the position to come home and help out. That was in 1992. 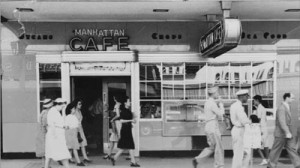 How did you turn things around?
I had learned so much in college and in my first job that there were some very basic tools that I put in place at the restaurant that helped. One of the key things was just straightening out the balance sheet. The company was loaning money to employees and partners, so I stopped the cash going out, and that helped turn things around. On the purchasing side, the systems were not very efficient, causing artificially high costs. For instance, we were buying food in quantities that qualified us for discount prices, but we were still being priced as if we were buying a small amount of food. I corrected that. I also computerized the purchasing process as well as time and attendance, which is the labor tracking. We got a lot more efficient with our labor.     Since the salaried managers had a profit sharing arrangement with my parents, they became favorably inclined toward me when these changes made the company a lot more profitable in a short time and increased their bonuses. At first, they were worried that I was going to be the kid from hell who would ruin the business.
Who developed the early recipes, and who is in charge of that now?
Originally, a lot of the recipes came from the Manhattan Café. My father was the mastermind behind the recipes that have lasted through all these decades. He studied food passionately. He also bounced everything off  my mother who is a very good cook. When my mother came into the business, she upgraded the seafood, insisting that we only source the best-quality products, which, of course, impacted the food flavors. Today, the person most responsible for the recipes is our chief operating officer, Matt Charbonneau. We also have a food committee that makes the final decisions. 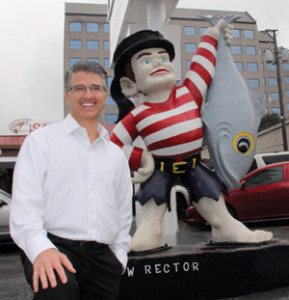 Nowadays people increasingly want healthy foods. How has Sea Island responded to this trend?
We started responding to that a while back. We used to have everything breaded or fried but now a large portion of our menu is broiled or grilled. We expanded the range of salads we offer and removed the trans fats from our oil. One of the dishes that our health-conscious folks order a lot is the Lighthouse Fish Platter, a broiled piece of fish with some very nice sautéed vegetables. We still have people who come in and want to eat our fried food, but we can tell them that everything is very thinly breaded – we do it by hand – and made with a  very little cholesterol-free and trans fat-free vegetable oil.
Why did you decide to venture into Mexican cuisine with Tiago’s?
When Matt became our COO, we promised him that if he helped us improve the mother ship, so to speak, we would help him develop his own restaurant concept. He wanted to use our company’s infrastructure and not build a company from scratch. Tiago’s came truly from the heart and brain of Matt. Matt and I both liked the food in Cabo San Lucas — lots of seafood, —  so we agreed that the new restaurant would serve food based on the cuisine from that region. Both Tiago’s restaurants are doing great.
What would you say are the key factors that determine a restaurant’s long-term success?
Quality, value, consistency and variety.  We also have an effective format. There’s no tipping, you order at the counter. We don’t make that much on each plate, but we sell a lot of plates. We always say, if you want “to dine,” go elsewhere; if you want to eat good, fresh seafood, come to Sea Island. Sea Island was fast casual before that concept became cool. My father wanted to make quality food affordable; he was always for the common man. 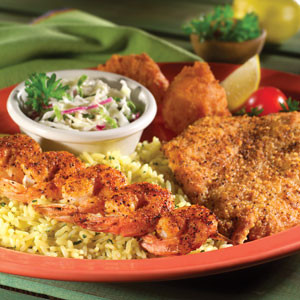 Your approach probably guarantees repeat business.
I can’t tell you how incredibly loyal our customers are. They’ll call me or message me if something is off because they know how much we care. But we couldn’t do it without our employees. We have people who have been with us for 45 years; many have been with us for 25. We respect and cherish them. Happy people make good food. The most important thing is that we all feel honored to be able to carry forward my parents’ life accomplishment.
What’s your favorite dish?
Lemon Pepper Fish.