Occupation: Works in medical sales, simultaneously founder and president of The Gracious Gift.

Why she’s a Role Model: Got a charitable company off the ground in record time and did her homework to make it a success.

Her own Role Models: “My parents, Craig and Trish Sebek, because they always taught me to do the right thing with integrity and honesty.”

Believes that … ”Everybody can make an impact in their own way. If you feel led to do something, have the courage to find out how you can make your vision come to life.”

What she’s reading: Winners Never Cheat: Even in Difficult Times, by Jon M. Huntsman, about achieving business success without compromising your integrity. 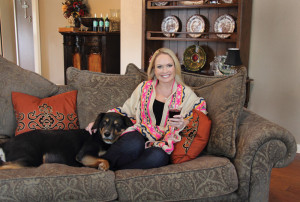 A good wine goes well with a good meal … but what if it could do a good deed at the same time? That’s the question that popped into Cindy Sebek’s head about two years ago. Now she’s founder and president of Gracious Gift, a wine company that benefits food banks throughout Texas and is branching out into other states.

It all started in August 2010, while Sebek listened to a sermon at Oak Hills Community Church. “That’s where the seed was planted,” she says. The minister was launching a drive for the Children’s Hunger Fund, an agency that provides food packs to families in need. Sebek was stunned by the facts and figures she was hearing about hunger rates in the San Antonio area. “It was shocking,” she says. “It sounded as though we were talking about a Third World country, but (the problem) was here in my own backyard.” On her way out of church that day, she took as many boxes as she could carry to fill with the requested pantry items. “It felt phenomenal that I could feed an entire family for a week,” she says. “That was my impact then — about 10 boxes. But God certainly was not done with me.” At that time, Sebek says, “I wasn’t volunteering any more than anyone else was” with the food drive, except for taking some extra boxes. It would take another experience to reawaken the need to help, this time on a much larger scale.

After several years in the medical sales field, “I loved my job, but there’s a time in your career where you get used to doing the same things,” she says. “I wanted to do something challenging.” With her brother Todd, she decided to go back to school to earn an MBA; they chose Texas Tech, her undergraduate school, because the university offered a program for working professionals that met for one intensive weekend each month. In her social-values course, the professor illustrated a lecture on good corporate citizenship with the example of TOMS Shoes, a company that gives a pair of shoes to a child in need for every pair purchased. The takeaway, for Sebek, was that “you could take a profitable business and turn it into something that does good.” The only thing that could make the TOMS model better, she thought, “was if the product could be something consumable. Even the biggest TOMS fan in the world could only buy so many pairs of shoes a year.”

Although she didn’t know it, the seed planted during that summer sermon was being nurtured. It wasn’t until a “girls’ trip” to Chicago with friends a few months after that social-values class that it flowered into a full-blown idea. By chance, Sebek met someone who was starting a wine label. She asked the man if he owned a vineyard, “and he told me you don’t have to own a vineyard to start a label.” That did it: “I woke up in the middle of the night and thought, ‘That’s what I can do,’” she says. “I could take a bottle of wine and make it feed people just as that box (packed for the food drive) did. And I knew what I wanted to call it: The Gracious Gift.” After mulling it over for a few sleepless hours, Sebek woke up her friends. “I asked them, ‘What would you think if I told you that you could buy a high-quality wine at the same price point you’re used to buying and it would help feed people?’” One of the points she stressed was that the proceeds would stay local: “I may never bump into someone who got a pair of TOMS Shoes,” she says, “but I liked the idea of helping someone who might live not so far from my neighborhood.” As the beneficiary, she chose the San Antonio Food Bank, which provides food to pantries all over the city and nearby counties.

Her friends encouraged her to pursue her idea, even though at that time, “I had never volunteered at the Food Bank and never visited a vineyard.” So when Sebek returned home, she contacted a friend who works at H-E-B and helped her meet with the head of the grocery chain’s beverage department. He, too, thought she had a great idea and told her that Gracious Gift was such a good name, he’d trademark it if she didn’t. As they discussed steps toward bringing the product to market, he advised her to design the label, find the right wines and come back when she had something ready to sell, advising her that it usually takes about two years to get a new label onto the shelves. “That’s too long,” Sebek told the H-E-B executive, proposing instead to have her product ready to sell during the next holiday season. That meeting took place in January 2013; through a contact with a local beverage distributor, she identified a few businesses to approach. After some research, she settled on the Oak Ridge Winery in Lodi, Calif., choosing some popular varietals — chardonnay, cabernet sauvignon and an old-vine red blend.

“I wanted the best quality for the price,” Sebek says. “I wanted to keep it under $15 so that it would be affordable to pick up on your way home for dinner and not break the bank.” Despite her lack of experience in the field, “Once (the winery staff) got to know the program, they thought it was a good partnership. And I already had the buy-in from H-E-B.” Meanwhile, she also had talked to Eric Cooper, president and CEO of the Food Bank, who helped her get perspective on the organization’s needs and funding. “He said everyone brings something to the table (when volunteering),” Sebek remembers. “For me, it’s the wine.” Though the community-supported agency has to be careful with an association with alcohol, Cooper and others at the Food Bank approved the project “after they got to know me,” Sebek says. “They knew I didn’t already have the product. I didn’t have to do this.”

Because the winery already was producing the wines she chose and the label already had been designed, she says, “We could have it on the shelves, no delay, two weeks before Thanksgiving 2013.” While Sebek had expected H-E-B to try Gracious Gift out in only a few stores, it was sold in every store that has a wine steward. Promoted as providing seven meals to the needy with the purchase of every bottle, “Our sales were through the roof for the last two weeks of November through December. People were buying it by the case,” including purchases for corporate gifts, company holiday parties and employee gifts. Since then, the program has expanded. Gracious Gift wines sold in the Austin and Houston areas, for instance, benefit food banks in those cities, and the product is even for sale in 20 Illinois stores, whose buyers Sebek met through her winery partner. “Amazing things can happen, even if you’re not fully equipped,” she says. “It’s been an eye-opening experience.”

Last August, Sebek finished her MBA degree. “It’s an empowerment tool,” she says. “I can discern more of what works and what doesn’t.” The social-values class sparked her idea, “and I leaned on professors (at Tech) to get their opinions.” Since then, she has gone back to Lubbock to talk with current students about entrepreneurship. The Gracious Gift, so far, has grown without the need to take out loans. “I have a lean business model,” Sebek says, “no office, no assistant,” although a friend helps out with social media and marketing. “I love my current job and my customers,” she says, “but if at some point, this were to become something that needs me to take over full time, I will.” Though running the wine company in her spare time keeps her busy, she’s content to juggle for now. Looking forward to another holiday season, she says, “I feel I’ve been blessed.”

Gracious Gift wines are available at H-E-B stores, at www.heb.com and www.graciousgiftwine.com.