Ten years ago, photographer Marie Langmore rescued an abandoned dog on Austin Highway, hoping to find a good home for him. When there were no takers, Langmore decided to keep him. “He’s the best thing that ever happened in my life,” she says emphatically. “He comes to work with me, and he bonds with clients who also have dogs. One client said to me, ‘I love my dog more than my children.’ That’s how I realized that so many women love their dogs like I love Austin.”
That realization inspired her to create a photo series featuring women and their pups. Says Langmore, “I wanted to capture that bond between owner and dog.” 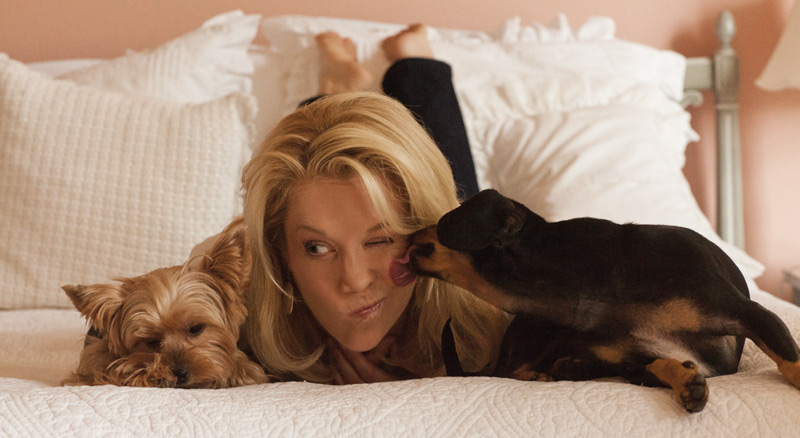 ROBIN HOWARD
Beatrice, Yorkie, and Leo, Dachshund
“My kids are both in college, so they fill a void. My four-legged babies are always at home with me. You just know what to do spontaneously — love them, feed them, take care of them. Animals know when you love them.” 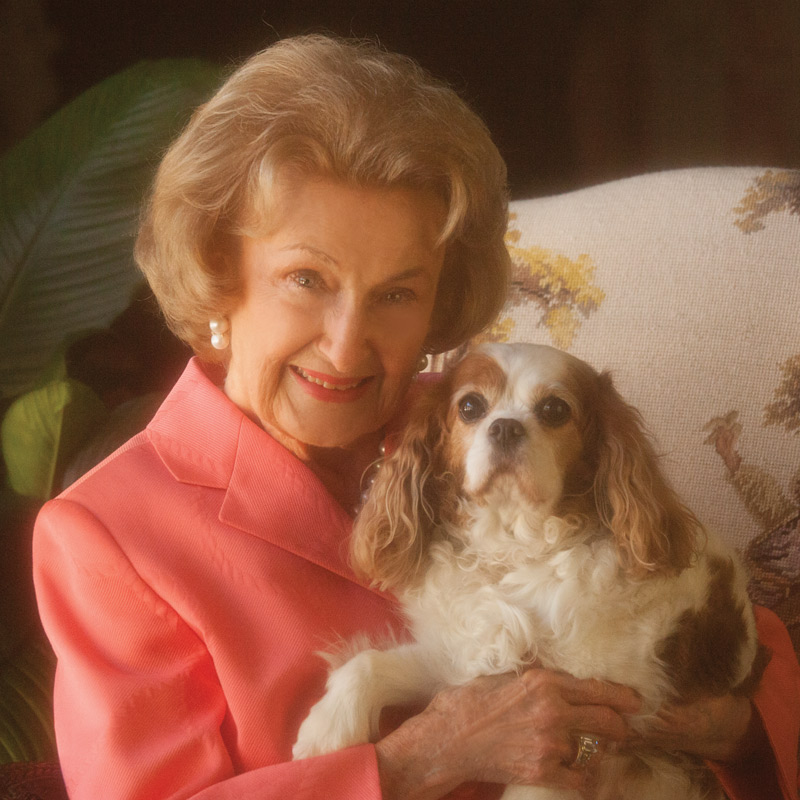 CHARLINE MCCOMBS
Miss Daisy, Cavalier King Charles Spaniel
“She’s No. 1 in our household, the most precious angel that we’ve ever had,” says McCombs. Even her veterinarian loves her. Following a recent visit, the doctor called to share how much everyone in her office enjoyed Daisy.       The photo above is just one of many Langmore took of Daisy and her mistress. McCombs has a box full of beautiful pictures, some of which she intends to frame and give to family as Christmas gifts.

CLAUDUA ZAPATA ELLIOT
Gigi, Lab mix & Lulu, Rat Terrier mix
“My husband (former Spurs player Sean Elliott) and I support rescue efforts, and we did a lot of work with the Humane Society to help move San Antonio toward becoming a no-kill community,”. The couple also own two cats that get along OK with the canines. “It’s a little bit of a zoo, but we love it,” notes Zapata. Their furry friends sometimes reciprocate in their own way. Lulu, “who is somewhat of a hunter,” surprised her masters a couple of times with special gifts: a dead bird and a dead baby rabbit. “I slept in the same room with a dead bird,” says Zapata with mock horror. 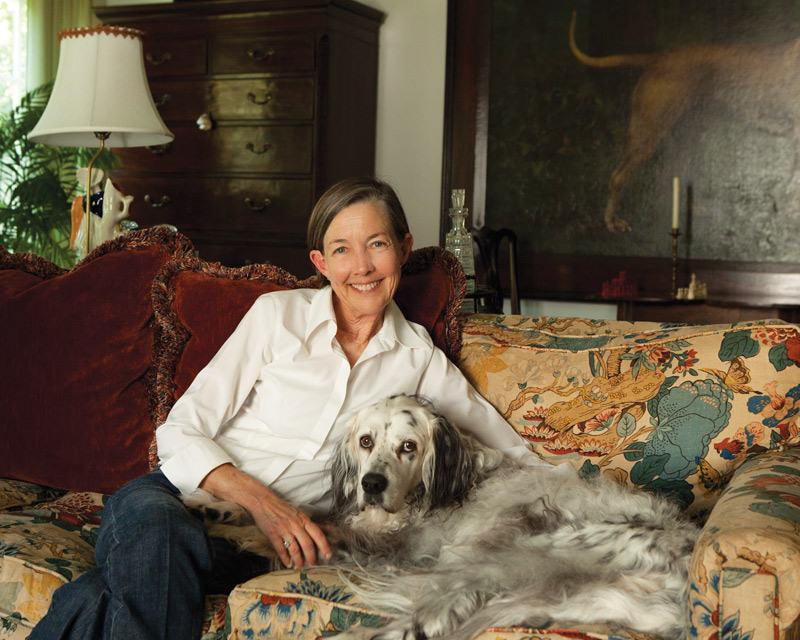 LOU WOMACK
Ned, Llewellin Setter
Ned (pictured with her), died after being part of the household for 16 years.  “Next to losing my husband, it was the hardest thing for me. Ned was my husband’s and my constant companion,” recalls Womack, a farmer, rancher and environmentalist “He went where I went. The last year of his life he was sick, and I took care of him. Toward the end, I slept with him on the floor downstairs because he had to get up and go outside several times at night. We were joined at the hip.” 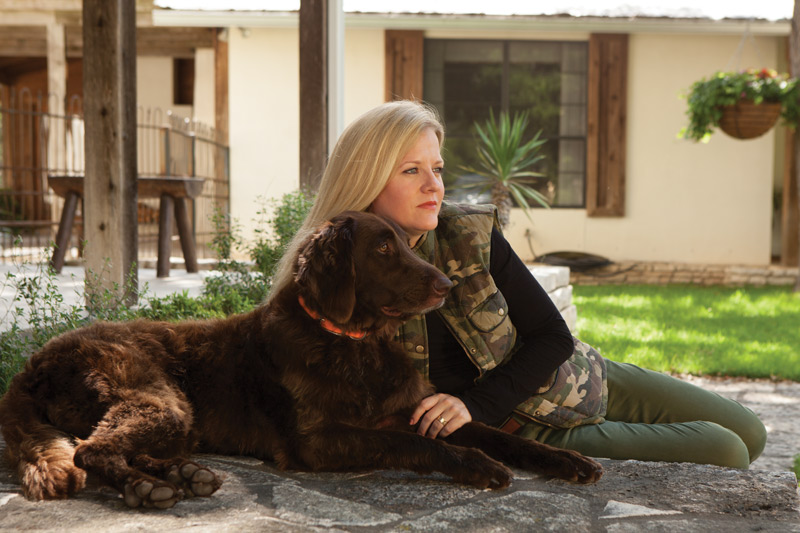 HEATHER HAYNES
Ivy, German Longhair Pointer
“If she gets on a trail of something, you can’t stop her,” says Haynes, who works in her family’s insurance agency, Sanger & Altgelt. Yet this fierce hunter is gentle with her owner’s 4-year-old son, J. “Ivy, J and I are a family,” she states simply. Mother and son recently took Ivy to his pre-school for the blessing-of-the-pets ceremony, and she was at her best behavior. Haynes believes the dog understood the importance of the occasion. Still, strangers have to be careful around her. When her owner is at work, Ivy guards the house, sitting by a favorite window and watching. “She has to earn all that dog food she eats,” jokes Haynes.

SHARON BATCHELOR
Sophie Lauren Batchelor, Poodle
“We immediately connected; it was very natural, and I took her home,” she says. “Sophie is full of life and very high-energy, as I am.” She’s also “a princess who can do just about anything she wants.” But the princess is also very protective of her mistress. “She won’t let anyone near me unless I let them,” explains Batchelor, who takes the poodle just about everywhere she goes. 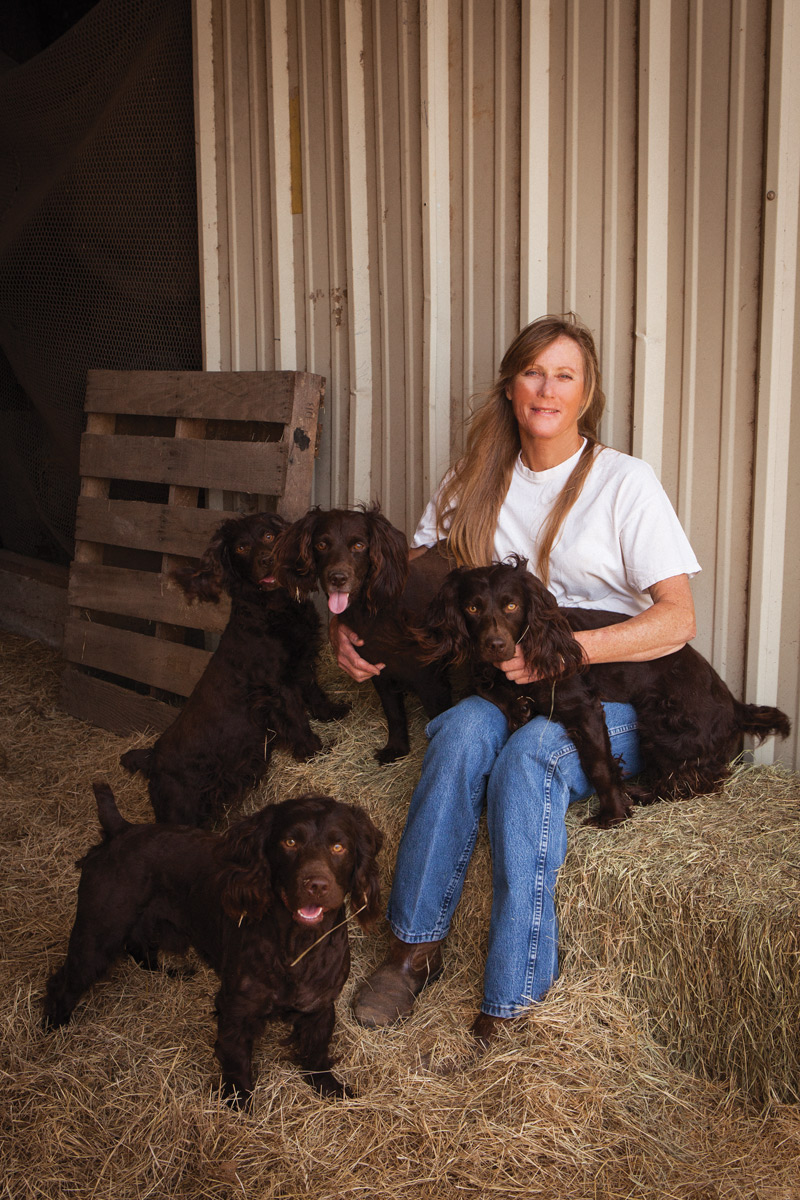 DEBBIE KILLIAN
Boykin Spaniels
“They are just like our children. If one of them dies, it’s devastating.” Amazingly, she can tell them apart. The couple’s life revolves around their “brood.” They seldom travel together these days because someone has to mind the home front at all times.  When not hunting, the canines are very easygoing. It’s not unusual to see a bunch of them on the living room couch watching TV with their masters. “They are spoiled,” admits Killian. 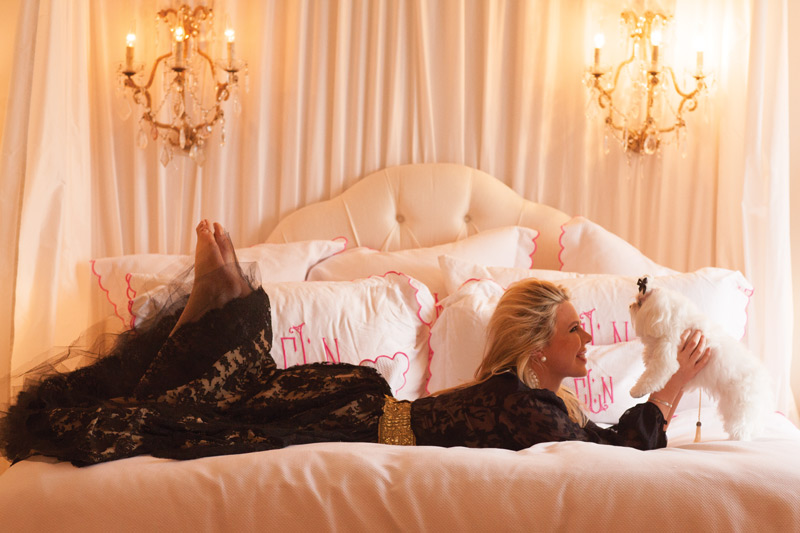 CASSANDRA LONGORIA
Bella Valentina, Maltese
“She’s so much like me,” says Longoria, “has so many of my quirks. For instance, I like things well organized, and I am a clean freak, and she is the same way.” When Bella gets her paws muddy, she licks them thoroughly until they are clean. When her owner took her to a dog park, she refused to walk on the grass because she considered it dirty. You know, too many other dogs! 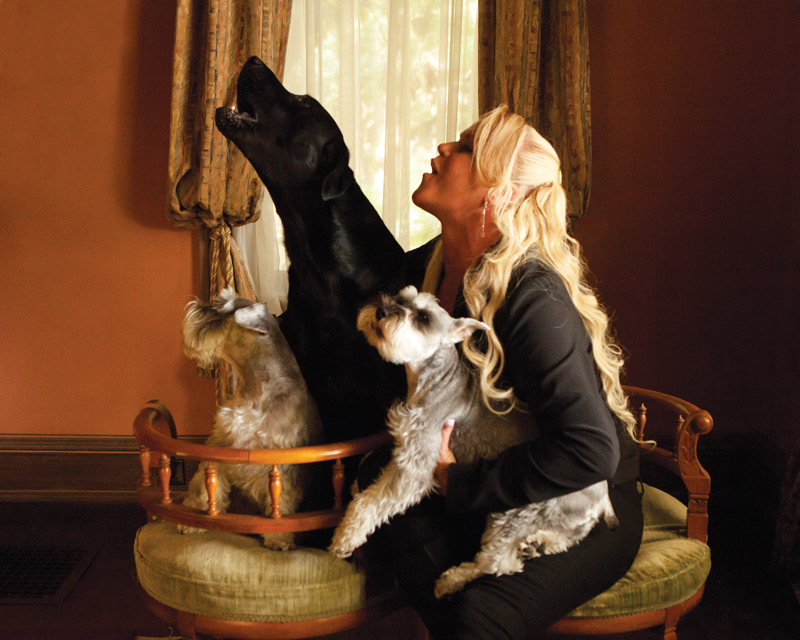 KYM RAPIER
Schnauzers, Lab
“I love all animals, but dogs are special because they love you back,”  The Rapiers still maintain a residence in San Antonio, and Kym is still considering opening a no-kill shelter in our city. “It will have to be in my house, where they could run and have fun. I couldn’t keep them in cages,” she says.  Her San Antonio-based dog-grooming business is still in operation.

ALICE BALL
Katie, Josephine, Cricket, Nellie and Rusty
“Katie, rat terrier; Josephine, half red Labrador,  half bloodhound; Cricket, the driver, my East Texas dog, is  probably pit bull (that I call boxer) and German shepherd … shhh … she’s my favorite; Nellie, border collie;  Rusty, red Labrador sitting outside of Cadillac. He is 14 years old and still cruising!  Although Nellie is the youngest at 10 months, she was the best behaved and most photogenic at the photo shoot. Her new nickname:  Actriz. I would like to make this clear — I am not a dog hoarder. My children brought all these dogs home to me! Half the fun of having so many dogs is how they interact with each other. They are very entertaining and fill the void when I am alone.” 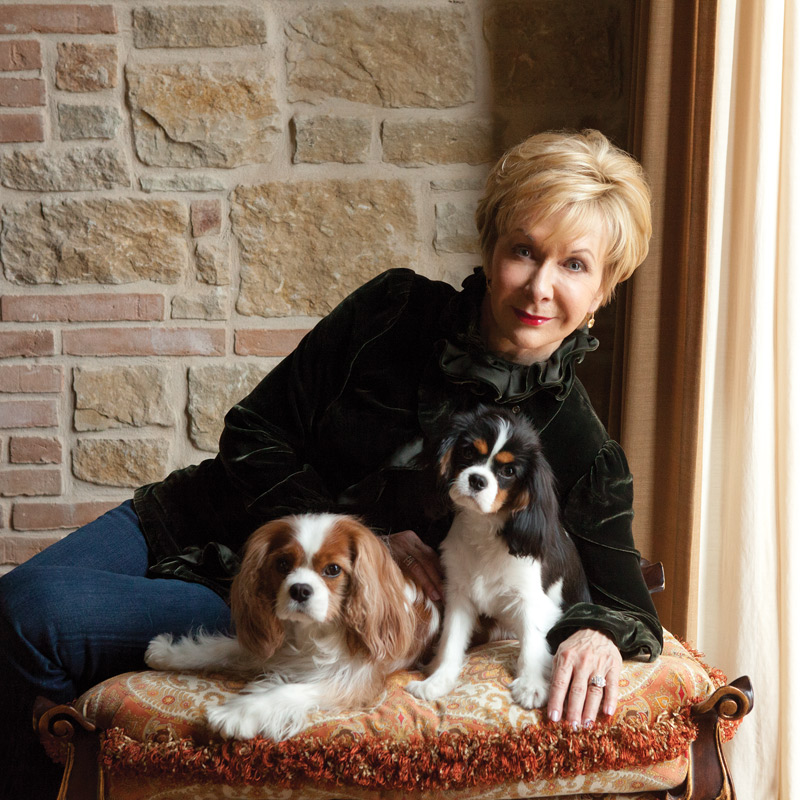 DEBORAH AMINI
Gabriella and Sophia, Cavalier King Charles spaniels
“We got Gabriella when she was 16 month old. She is the sweetest dog. She is my shadow and follows me everywhere. I walked by her the other day, and she looked at me, and I felt this overwhelming sense of love. Her eyes said, ‘I just love you.’ Then we got Sophie. She is a handful and spunky, my husband’s  buddy. They have bonded and don’t go anywhere without each other. It is so wonderful to come home and to have something so excited to see us. They are happy no matter what kind of day they had. It is the closest thing, other than my faith, that brings me joy!” 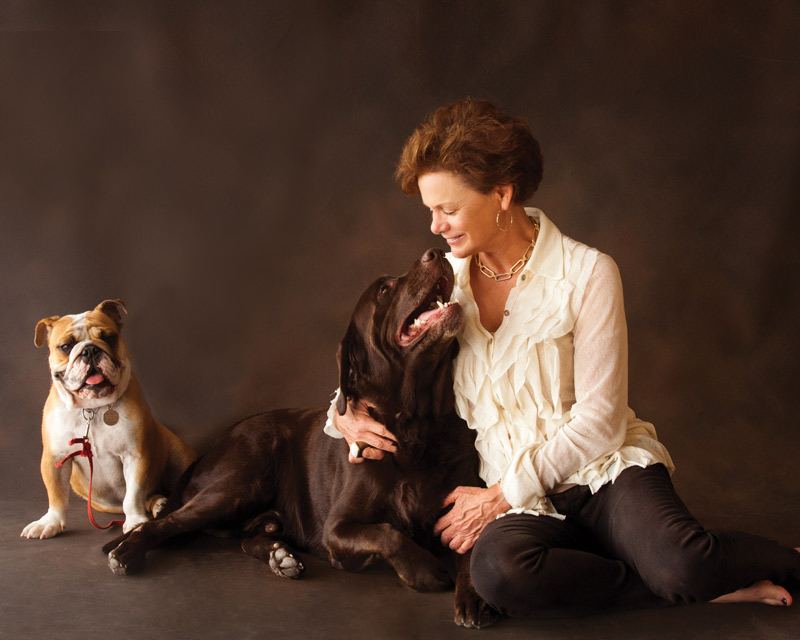 WHITNEY SMITH
Stella, English bulldog, and Duba, a chololate Lab
“Duba is probably the best dog we have ever owned!  He is willing and ready to do everything.  Stella was my son’s dog, but now she’s mine, and the two have bonded quickly.  My husband and I watch them play, and they provide us lots of laughter.  The interesting thing about this picture is that Stella was fairly new to our household and seemed very cautious around people and decided to stay off to the side.” 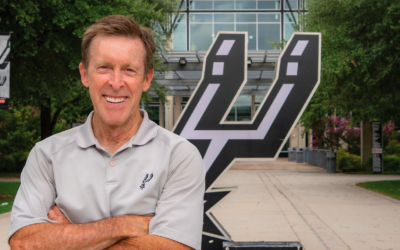 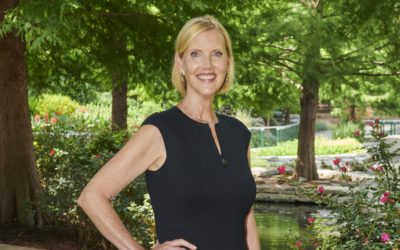 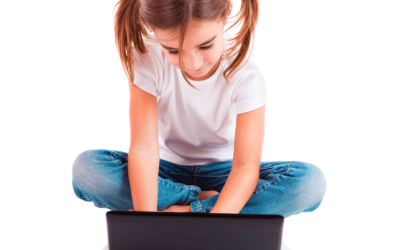 MOMMY MATTERS: Keeping Kids Safe in a Digital World: A Solution That Works