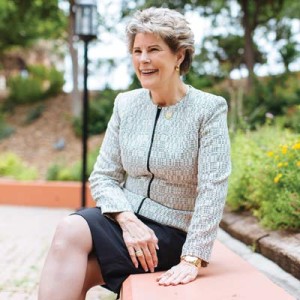 On July 17, the Bexar County Sheriff’s Office held a job fair to attract more women into the law enforcement profession. At the morning gathering at the Region 20 Educational Services Center, where the event was held throughout the day, some 65 potential job applicants collected informational material, listened to speeches and filled out forms, while friendly deputies mingled with them, trying to be helpful. When Sheriff Susan Pamerleau addressed the crowd, she explained that she and her colleagues would talk “about the profession of corrections. It’s not just a job, it’s a career.” She went on to tell them that one of the first things she did upon assuming office was to conduct a nationwide search for a “certified correctional executive” to oversee the Bexar County Adult Detention Center and that 28 other officers had since undergone advanced professional development, earning certifications as professional correctional officers from the American Correctional Association. By 2016, she would like to see the county jail become the first such facility in Texas to be accredited by the Association, whose standards are higher than those required by the State of Texas. Then she explained the statistics and the present needs of her office, both in terms of quality employees and women officers.

When we meet for our first interview the next day, Pamerleau reiterates why more women are needed. “One reason is that we need to have a diverse workforce to mirror the community we serve,” she says. “The other reason is that we have women inmates, and some parts of the job can be done only by women, such as in the housing units, for example. So, it’s important to have enough women to cover those units. But we don’t want to restrict women to just those jobs. We would like to see women move into other jobs — administration, booking, classification and others.” In addition, more women are being incarcerated. Between 1985 and 2007, the number has grown 404 percent nationwide, compared to 209 percent for men. While the local jail averaged 450 to 550 female inmates in the past, today that number has grown to 650-700. That represents 17 percent of the jail population. “As you can see, we have opportunities for women in correction,” notes the sheriff.

Before Pamerleau came into office, the press repeatedly reported problems with understaffing at the jail and the pressure that imposed on employees. There were, in fact, 52 vacant positions. “We knew we had to fix that,” says the sheriff. “There was a massive amount of overwork in the living units in posts that are critical to the running of the jail. We identified these and worked with the county manager to accelerate training and with the commissioners to approve funding for new positions. And we continue to hire. That’s why recruiting is so critical.”

Pamerleau, who had two successful careers before running for sheriff — a military and a corporate one — had no interest in seeking public office until her friend and former state senator Cindy Taylor Krier, representing a group of prominent Republicans, convinced her to try. Though her first attempt to become a county commissioner failed (mostly because of late entry into the race), she was inspired by the fact that she came close to winning and by the encouragement she received. While pondering whether to run again, another local political insider suggested the sheriff’s office. “Yeah, right,” she thought, “I’ve never been in law enforcement.” But after finding out more about the agency that employs 1,800 uniformed and civilian employees, she realized “that the role (of sheriff) is one of being CEO of a large and complex business. And my experience in the Air Force and at USAA had already given me the skills for that.” She has been putting them to good use since Jan. 1, 2013. In addition to fixing the urgent staffing situation and improving training, the sheriff and her team are now working on moving their operation into the 21st century by using the newest technology to streamline everything from field office communication to records management. Unbelievably, more than half the employees didn’t even have email accounts. Another priority is to enhance the physical facilities beyond the Detention Center, including building substations where they are most needed. Not only would these moves save money, but they will have a direct positive impact on public safety. To better communicate with the public, the agency also produced its first-ever annual report, “On a Mission,” describing all aspects of its work: patrol, jail, criminal investigations and court services, together with the associated expenditures of these services. 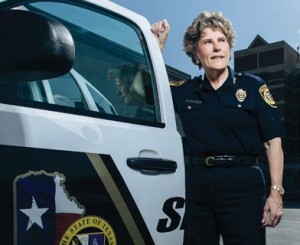 Three successful careers
Growing up as a minister’s daughter, Pamerleau remembers that music was a big part of her young life. An accomplished pianist, she was chosen to accompany school choirs both in junior high and in high school. She started college on a voice scholarship but soon expanded her “repertoire” to five different majors, ultimately graduating with a degree in sociology. In 1968, at the height of the Vietnam War, an Air Force recruiter visited her sorority just after two significant legal restrictions on military women had been lifted. “Here I am in Laramie, Wyo., with a sociology degree, looking maybe at a job as a welfare worker for the county,” recalls the sheriff. “No, I don’t think so! (Joining the military) was an opportunity to see the world and have new experiences. I’ve always been a risk taker.”

Ninety days after joining, she started her military career as an Air Force second lieutenant, and “it took me 32 years to find the exit,” she jokes. The bright young woman rose through the ranks, assuming progressively wider responsibilities that eventually brought her to the Pentagon and later to NATO headquarters in Brussels. When she entered the military, women were only 2 percent of the personnel. “Over the years all these new opportunities opened for women,” notes Pamerleau. “I saw the social change that was going on in our nation first happen in the military.” As her assignments grew more demanding and complex, she rose to the level of major general and made her mark as the first woman commander of the Air Force Personnel Center and the first woman in charge of the Air Force Reserve Officers Training Corps. These and other positions have taught her that there’s a difference between a leader and a manager. “You manage resources, but as a leader you inspire and guide people to get the mission accomplished,” she says. Following retirement, USAA hired her as senior vice president for military affairs.

But there was a dark period, too. While her career was progressing smoothly, home life was rather rocky. Back in the ‘70s, locked in an unhappy marriage, she suffered emotional and sometimes physical abuse from her insecure, troubled husband for years. When she finally started fearing for her life, she made plans to leave, triggering a tragic turn of events. When the two spoke on the phone after her departure, her husband, Ben, threatened to commit suicide and then proceeded to shoot himself. Pamerleau remarried a year later, but that marriage ended in divorce. Eventually, her career progressed to the point that she was outranking “almost everyone,” limiting her marriage options. Still a good-looking woman who doesn’t neglect her feminine side, the sheriff says that she remains open to marriage “if that’s God’s plan for me.”
Her experience with domestic violence has made her an outspoken advocate for preventing and reducing the incidence of abuse. “It’s an important part of how I can give back to the community,” she observes. Apprehending the abusers is the obvious thing to do, but in conjunction with other organizations, the sheriff’s office also works to educate women on how to get out of abusive situations before their children learn the same violent behavior. Most situations progress from verbal and emotional abuse to actual physical attacks. The issue is unfortunately a big one in Bexar County.

The other most common transgression is Driving Under the Influence and drugs in general. “If we could eliminate those things, law enforcement would have much less to do,” says the sheriff. 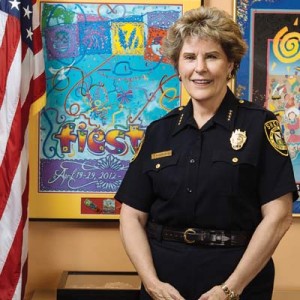 She’s having fun
Curiously, Texas law doesn’t require a peace officer’s license to run for sheriff, but if the elected person doesn’t have one, he/she must get the required training afterwards. That’s what Pamerleau did by enrolling in the Alamo Area Council of Governments’ Regional Law Enforcement Academy. She is a firm supporter of the Second Amendment, which gives citizens the right to bear arms. There’s a sign on her office wall proclaiming that “The Second Amendment is my gun permit.”
Though her male predecessors in the last 30 to 40 years all came from a law enforcement background, they lacked executive expertise, she states. That’s why she is now on a mission to retool the culture, policies and operations of the sheriff’s office so that they can provide for better public safety as well as be able to sustain themselves in the future, regardless of the person at the helm.

But four years may not be enough to fulfill this mission. Will she run again in 2016? “Yes,” comes the quick answer. “I will run for sheriff for as long as I am having fun. And I have fun every day.”