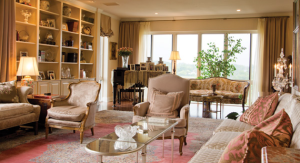 Condominium living is on the rise in San Antonio. Condos are springing up all over the city. When retirees Mary Ann and Chuck Franzke decided to downsize from their 5,000- square-foot home, they chose an established condo community, 4001 North New Braunfels. “We had friends who lived here,” Mary Ann says. “That’s how we became familiar with the community. When we decided it was time to downsize, we looked at all the condo communities. This one felt comfortable. It is near our church, our friends and in our comfort zone.” 4001 North New Braunfels has an enviable location, right across from the San Antonio Country Club on one side and the University of the Incarnate Word on the other. It’s minutes from the San Antonio River Walk, restaurants and shopping.

The Franzkes’ home is on the fourth floor. “Chuck picked this floor because of the view,” Mary Ann says. “Because we have a northeast corner unit, our view wraps around the building. On one side, we see the gorgeous San Antonio Country Club golf course. The other side gives us a beautiful view of the downtown skyline. When I wake up in the morning and look out my bedroom window, I see greenery everywhere beneath the rising sun. It’s just lovely.” The Franzkes’ transition to apartment living was easy. “It took six months to do the remodeling because of the work restrictions,” Mary Ann says. “We put our house on the market one month before the remodel was finished and sold it in time to move in.”

Condo makeover
The Franzkes chose Renee Herry Murray of Renee Herry Interiors for the interior design work; her husband, Bob Murray of SK&A Inc., served as the architect, and David Hartman was contractor. They gutted the entire condo, except for the guest room. Wood flooring replaced marble tile and carpet. The balcony was removed on both sides to enlarge the living room, master bedroom and dining room. The large column between the balcony and the living room was removed to create more space. The bar in the dining room was removed and existing space incorporated to make room for double ovens in the kitchen.

“We had to do a lot of updating,” Mary Ann says. “We’re really pleased with the results. Renee, Bob and David did a marvelous job for us.” 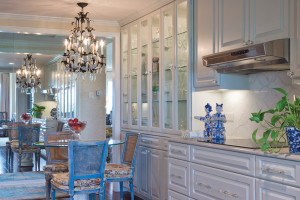 Walk into sunshine
Step into the foyer, and the first thing in sight is a striking ornate gilt mirror that the Franzkes brought with them from their house on Estes Avenue, which originally belonged to Wandita Ford Turner, a well-known San Antonio interior designer and daughter of O’Neil Ford, a leading architect of the American Southwest. The mirror was among things the Franzkes purchased from her when she sold the house to them. Just beyond the foyer is a world of sunshine and natural light, everywhere you look. To the right of the foyer is the guest bedroom, where a Corinne Hartley painting of a little girl hangs. As a former elementary school principal, Mary Ann especially enjoys art depicting young children.

A sparkling chandelier hangs over the guest bed; it came with the Franzkes from their Estes Avenue home. Beside the bed is a feathered marble-topped console and French mirror. The wall-to-wall window provides a clear view of nearby San Antonio Botanical Garden.

Sparkling kitchen
“Designing the kitchen was somewhat a challenge,” Mary Ann says, “because it’s the first thing you see when you step to the end of the foyer. Originally it was a galley kitchen, small and dark. We expanded and opened it up to let in the natural light from the dining room.” Renee and Bob gained space for the kitchen by removing the pantry, relocating it to the laundry room. All the white cabinetry was custom-made, including the glass-shelved unit that holds Mary Ann’s crystal ware. Cabinet fronts for the dishwasher and refrigerator were crafted to match the cabinetry. The countertops are of Silestone, and the backsplash is Thassos marble with a mother-of-pearl inlay. A crystal chandelier hangs over a small glass-topped table near the kitchen entry.

Spacious living and dining
The Franzkes enjoy entertaining, and the spacious living and dining area gives them plenty of room for it. “The Fourth of July is always a good excuse for a party,” Mary Ann says. “We watch the country club’s fireworks from our sofa. The club also puts on a great firework show for Fiesta, so we have parties then, too.” The area wraps around the corner of the building, forming an “L” shape. Except for one small section of built-in bookcases, the walls are basically glass, affording guests 180-degree views of the great outdoors. A large Kerman Persian rug covers the floor; three other Kermans are scattered throughout the home. The seating came from Wandita Ford Turner; it was recovered in lighter, monochromatic colors for a classic but current look. Two gilt wood and marble Louis XVI consoles flank the couch; a girandole sits atop each surface. Above the couch hangs a pair of mirrored trumeaus.

The massive armoire is an antique. “At first, we weren’t sure how we’d get it up here,” Mary Ann says. “It was too big for the elevator. Then we realized that because it is so old, it was assembled using pegs rather than nails. Ron Olson, our expert handyman, was able to disassemble it downstairs, bring the pieces up via the elevator and reassemble it in here.” The painting beside the armoire is by Asturi, one of five the couple owns. “Asturi is one of my favorite artists,” Mary Ann says. “I like the way he handles color.” The built-in shelving in the far corner displays treasures from the couple’s international travels. Two claret jugs bring back fond memories. A bronze pheasant signed by artist J. Moigniez is perched here, too. A baby grand piano occupies the corner of the room. Lighting for guest pianists comes from an ornate antique floor lamp. A small sofa provides comfortable seating for music appreciation. An occasional table displays a Corinne Hartley bronze.

A large crystal chandelier hangs above the glass dining table, where the Francis I silver service is displayed. A square mint-green Kerman Persian rug lies beneath the table. The dining suite seats eight, a good size for a dinner party. 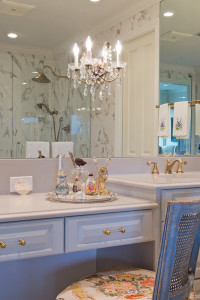 Grand powder room
The powder room was originally a full bath. “We really didn’t need a third full bath for the two of us, so we divided the space,” Mary Ann says. “We converted half of it into a powder room. The remaining space we placed into Chuck’s closet for a built-in dresser.” Holes were cut into the top of a French commode to convert it to a sink console with gold fixtures. A second French commode is used for linen storage. The chandelier completes the powder room’s Old World design. Adjacent to the powder room is one of Mary Ann’s favorite paintings by her cousin Ellen Berman. It is of a Bye Lo bisque baby doll made in the 1920s by Grace Story Putnam. Collectible Bye Lo baby dolls were very realistic. Chuck’s office is across from the powder room. It’s his lair, complete with built-in desk and cabinets, sofa and wide-screen TV.

Beyond Chuck’s office is the master bedroom. “We were accustomed to a large bedroom in our former home,” Mary Ann says. “We wanted a similar idea here, so we enclosed the balcony to gain more floor space. This allowed us to build a hidden computer desk in the alcove. It also gave us room to place the large bureau plat Louis XV writing table we bought from the Mannheim Gallery in New Orleans.” The sitting area at the end of the room features two comfortable upholstered club chairs facing a television armoire. Family portraits hang nearby. A formal mother-of-the-bride portrait of Mary Ann hangs on the far wall. Nightstands flank the king-size bed. A bronze of a shepherd and lamb from Laity Lodge is a prized possession. Nearby hangs a serene painting of a pond by Kevin Partridge. 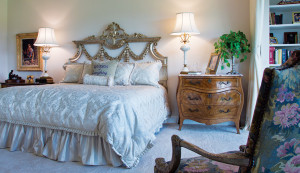 The master bath features a walk-in glass shower. White marble covers the walls and floors. Crystal sconces are mounted on the mirrored wall above the vanity. Mary Ann’s closet has a built-in dresser and double-hung rods for her wardrobe.

A happy surprise
Mary Ann and Chuck enjoy their new condo lifestyle. “I am very fond of all the people who work here,” she says. “They are the nicest people in the world. They pamper the residents, and it’s been a happy surprise. They make it so pleasant to live here.” 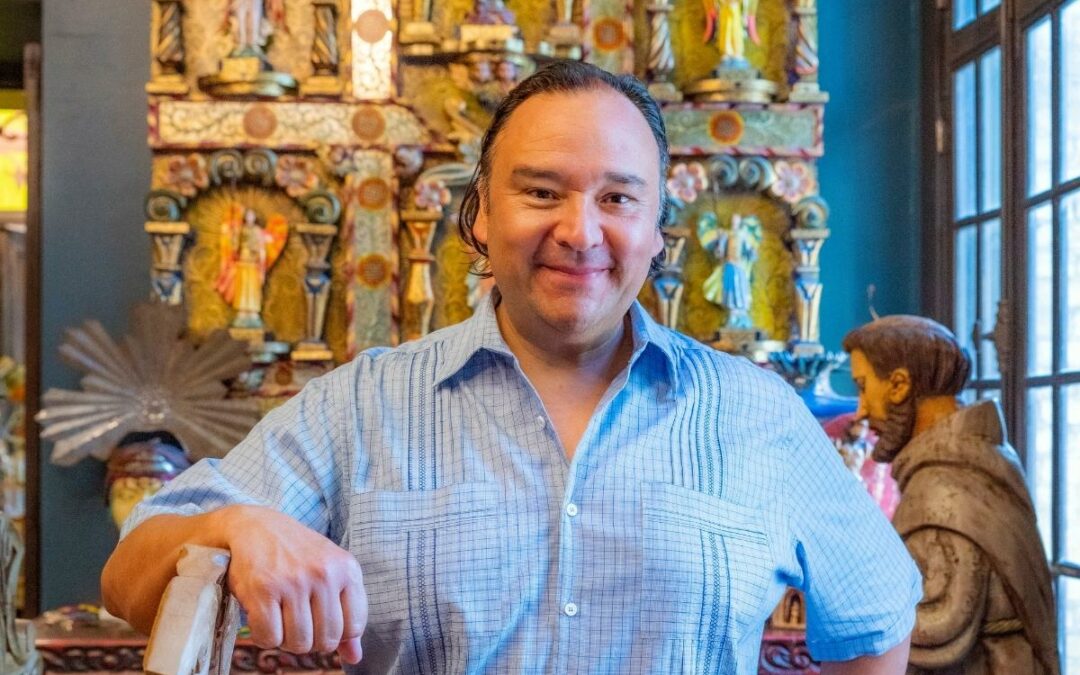 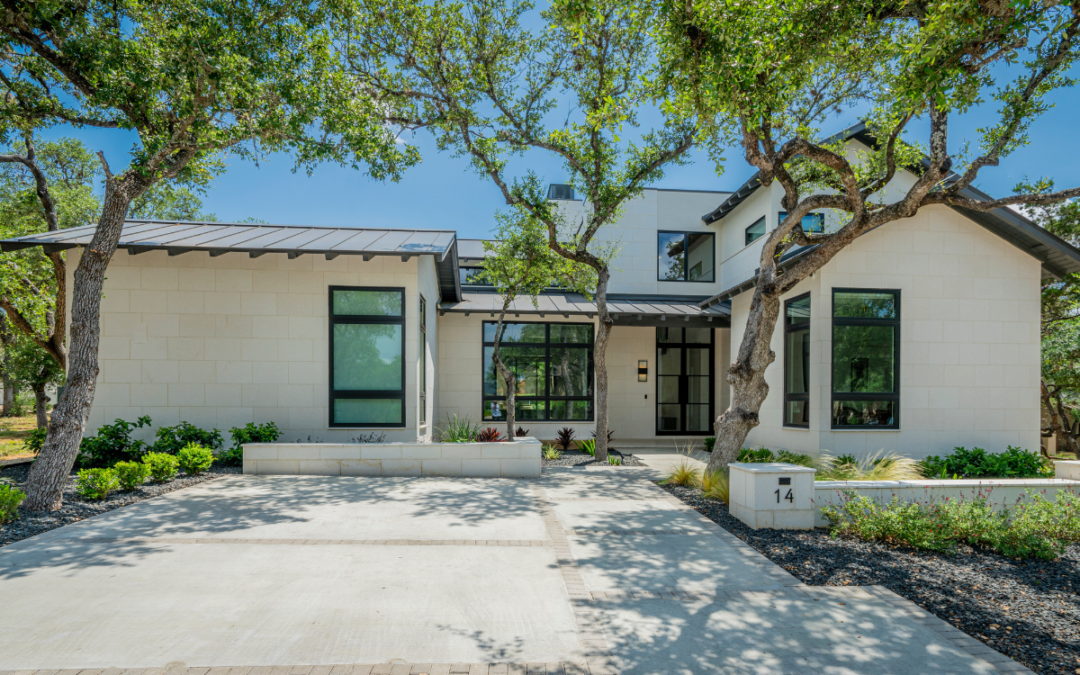 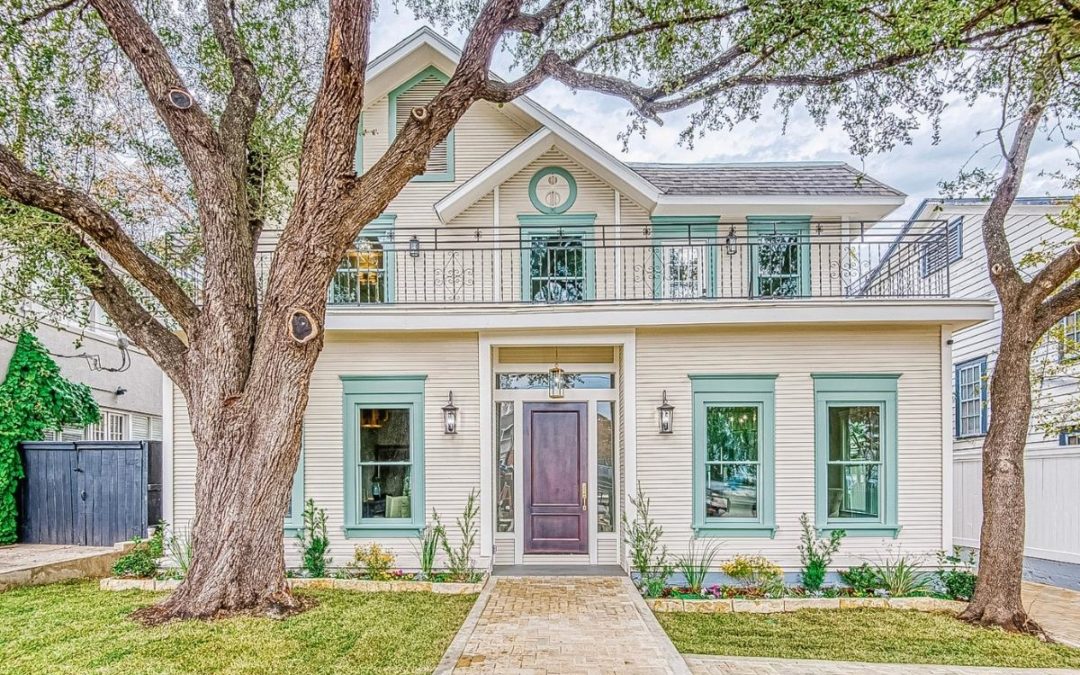 At Home: A Historic 1890 Complete Renovation in Monte Vista