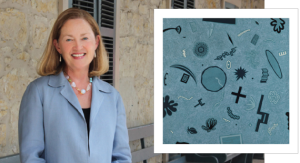 On the morning I arrive at the Southwest School of Art (SSA) to interview its president, Paula Owen, there are tables set in the front yard, with adults and children milling around, busy signing up for the children’s summer programs. Youngsters from 5 to 18 can choose from 130 class offerings, anything from cartooning and drawing to jewelry making, painting, sculpture and puppetry. Come fall, a different group of young people will populate the charming historic campus when the first freshman class of college students inaugurates the brand-new Bachelor of Fine Arts (BFA) program at the art school.

“It was a natural next step in the evolution of the institution,” says Owen, explaining why the respected community art school decided to establish the first independent art college in Texas. “It’s really not that dissimilar from what we have been doing for nearly five decades. We have always had serious art students who went on to become working artists. This (the BFA) is an extension of that. Our BFA program is going to be small and focused, comprehensive and more individualized than typical university counterparts.” Students will enjoy personal mentoring, access to the school’s many studios and a wide choice of art genres, including the less common ones such as book art, papermaking and fiber arts. To make their lives even easier, SSA will offer all the general education courses right on campus as well, with an eye on how these disciplines relate to their art.

In preparing for this big step, the school engaged in a meticulous study of all relevant factors, including a capacity analysis of its campus and a 10-year financial forecast, and decided to start small and grow slowly. Wisely, Owen also consulted the other art movers and shakers in town and nearby colleges and was delighted to get their support. Now everything is in place for classes to start in late August. “We all feel a great sense of exhilaration, but we haven’t started celebrating yet,” she says. “The challenges we have given ourselves do not end with enrollment, they continue, but the gratification continues as well.” While the degree program is the big news, she wants everyone to know that the existing community classes will not only continue but will likely be supported by the college.

Though she often speaks using the plural “we” to include the entire SSA community, people who know her view her leadership as the primary force that helped bring growth and stability to the school that started life as the Southwest Craft Center back in the early 1970s. Since she took the helm in 1996, the institution has grown both physically and artistically. Capital fundraising campaigns have been extraordinarily successful, making it possible for the school to increase its exhibition and studio space considerably with the addition of a second campus — known as the Navarro campus — as well as to plan for future expansions on the other side of Navarro Street. The operating budget has quadrupled, allowing for new programs to serve the public, additional scholarships for those who need them, a more streamlined overall operation as well as the preservation of the historic Ursuline Academy property that SSA calls home. “Paula has been methodical about building the capacity of the staff, board and organization,” wrote businessman and board chairman James Lifshutz in an email. “She has been effective in forming alliances with art schools, other arts organizations, elected officials and community leaders. Throughout her tenure, Paula has been dedicated to building and maintaining long-term fiscal sustainability and elevating the artistic stature of the school and its programs … There are few nonprofit executives in San Antonio who have proven to be so capable.” Her staff would wholeheartedly agree. One prominent member praises Owen as “a fundraiser par excellence,” adding that she’s widely admired in the community for her vision and for articulating SSA goals. Major foundations respect SSA and support the vision, he says.

Higher exhibition standards
At the same time, her artistic savvy has helped push the scope and quality of exhibits to a higher level. Not only have many prominent San Antonio artists shown their work at SSA, but other Texan, American, and even international contemporary artists working in a variety of media have been invited to participate. It’s hard to find a local artist who doesn’t love the place. “Paula has supported local artists through the exhibition program,” says artist and UTSA professor Constance Lowe. “She finds the art scene here vital and rich, and she considers San Antonio artists on a par with others.”

Owen has a huge input in the selection of exhibits. “I have a curatorial background, and my position includes the title of chief curator,” she explains. “I often conceive of an exhibit and then (director of exhibitions) Kathy Armstrong handles all the details. But we practically read each other’s minds. I stay abreast of what’s going on in contemporary art, and ideas just occur. Right now, I am working on an exhibition of contemporary porcelain sculpture for November titled Pale & Fragile. I was inspired by artists who work in this medium. The fragility of the material underlies the concept of the work itself. The show will cover a broad range, from meticulously formed objects to figurative sculpture. We often plan things well in advance, and that’s why our exhibitions are so polished.”

Other upcoming shows speak of the typical range of offerings, from the July all-school exhibition showcasing work by students, studio artists and faculty to Altering Space, featuring American and English artists, and two solo shows of works by Trinity professor Kate Ritson and Georgian photographer Timothy McCoy, respectively. Needless to say, there’s plenty of art to see in both SSA buildings. In the president’s office, a large and whimsical painting of “Eve” greets visitors as they enter, but ceramic, metal and paper pieces from various artists sit all around. There’s even an embroidery piece by Bettie Ward. Owen is known for her calm demeanor, and her serene office must have something to do with it. “We design our environment to instill creative thinking,” she observes. “I do love coming to work.”

She’s an artist, too
Growing up in a small town in Iowa where her father was a college professor, young Paula always knew that she wanted to be an artist. And although she eventually pursued the necessary degrees, reality also forced her to take a variety of jobs — as a graphic artist, a PR person, a teacher, etc. — to add to the family income. She had two children with her first husband and now has four grandkids, two of whom will be attending classes at SSA this summer. She moved to San Antonio from Richmond, Va., with her second husband, Ben Owen, a former system analyst and a musician.

Though she was not looking to change jobs at the time, once she visited here, she was hooked. “I was impressed by the quality of the work here, the artists and the devotion that people had for the school,” she explains. “All this potential! I just couldn’t resist it. I still feel that same kind of enthusiasm, and I like all aspects of my job.”
One aspect of her career that may not be in the job description is her own artistic pursuit. While her time in the studio is limited, she makes art on a consistent basis. A recent REM Gallery show, Vague Chatter, was devoted to her more recent output. “I made that promise to myself, to work consistently in the studio. I am not a whole person if I don’t spend time in the studio,” she says. “The biggest difference between what I do in the office and in the studio is that in the latter I am completely in control. In the office I am always making quick decisions; in the studio, I can go deeply into myself, and the external world goes away.”

The “office,” of course, remains a busy place as SSA is readying for its 50th anniversary celebration next year that will invariably include a look back at the site’s history, which started when a group of Ursuline nuns opened a girls’ school there in 1851. The nuns left in 1965. For the president, the coordination of upcoming events is yet another multitasking project but one whose significance she appreciates. “Lots of important moments, people, innovations, classes and exhibits have built on each other over decades so that today we can have this thriving institution,” she notes with satisfaction.