An Artist & a Leader: Sylvia Benitez 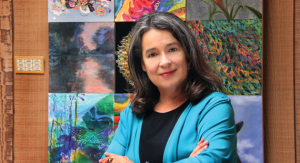 Medical school is not a likely place for an art exhibit, but many employees and visitors to the UTHSC’s flagship institution have had the opportunity to view some gorgeous original art for almost a year. Housed on the seventh floor in the psychiatry department, the show, The Exquisite Quilt, was mounted by a women’s art collective known as the Gentileschi Aegis Gallery Association, or GAGA, an organization founded by artist Sylvia Benitez in 2010. With a broadly defined theme of flora and fauna, 81 individual panels created by 31 artists were assembled into nine large sections that you couldn’t pass by without stopping to examine. Each artist’s interpretation was unique, and each was amplified by the others within the large panels. It was a feast of color and creativity.

“From here, the show will be going to the Louise Hopkins Underwood Center for the Arts in Lubbock,” said Benitez when we met in the exhibition hall in late March. “Lubbock has an amazing art scene. Their First Fridays (akin to San Antonio’s events in Southtown) attract the whole town. This will be a sales show, so what’s left of it will then be installed at the Bihl Haus in December.” This month, GAGA will open a different show at the Southwest School of Art. Titled The Exquisite Rainbow Corpse, it will feature 96 pieces mounted on opposite walls, “with a rainbow of light panels on one wall and a rainbow of dark panels on the other.” Then come fall, the Art Institute of San Antonio will play host to Material Choice, an exhibit about craft materials used in fine art.

Not bad for a young nonprofit. Benitez started GAGA to help promote and serve the mature woman artist of South Texas, through exhibition, promotion and education opportunities.

“When I was teaching at the Southwest School of Art, most of my students were women in their 40s or older, very talented and eager to show their work,” says Benitez. “I began wondering how I could help these fabulous ladies. If you are starting your art career after having been a doctor or teacher for years, you are not taken seriously (by the art establishment). But being new in the area, I was also lonely, so that was another reason to form this group. It has absolutely snowballed. We have 60-plus members now.” Quite a few have a strong art background but were not able to devote time to art earlier in life, and, to Benitez’s surprise, younger women are joining, too. GAGA refers to Artemisia Gentileschi, one of the few successful female painters of the 17th century, and invokes her protection with the use of the word “aegis,” goddess Athena’s shield. Since its inception, GAGA has organized more than 10 shows in San Antonio, Rockport, New Braunfels and Beeville. Thanks to her efforts and connections, Benitez has been able to bring to town curators, master printers, and museum experts to interact with the group through two additional GAGA programs: the Professional Insights Experience and the Curatorial Experience.

For former physicist and CPA Brigitte Saidi, GAGA was a godsend. About two years ago the self-described amateur watercolorist attended the show opening of Benitez’s paintings at Gallery Nord and was impressed by the painter’s cloudscapes. “I chatted with her, and Sylvia told me about the organization,” recalls Saidi. “I went to a member exhibit and was fascinated and enchanted by the work and by being around them. I am learning so much by talking to them about art. It helps me to understand what I am doing and the direction I want to take. It has definitely enriched my life.” Saidi participated in the Quilt show and will be part of the Rainbow one as well. What’s more, she is now represented by the River Edge Gallery in Kerrville. Already established artist Carolina Flores had similar comments about the support and cooperation within the organization and words of praise for Benitez’s generous input: “I have enjoyed getting to know Sylvia, an artist of high caliber and so well connected. She’s been a new mentor to me and a wonderful one.”

A transplanted New Yorker
A Maryland native, Benitez has known she wanted to be an artist since age 7. After getting a BFA and attending graduate school “for three hours,” the eager young woman headed to New York City to immerse herself in the contemporary art scene. Over the course of a couple of decades she made a name for herself and has a long résumé to prove it. At first, with little money in her pocket, Benitez says she collected trash and used it to weave tapestries, but as her reputation grew, grants and awards came her way, including two from the National Endowment for the Arts, two from the Pollock-Krasner Foundation, a Puffin Foundation Award, the Adolph and Esther Gottlieb Foundation Individual Support Grant and others. Thanks to funding from various state art councils, she participated in 70 collaborative mural projects in schools in New York, Maryland, Delaware and Pennsylvania.
From trash tapestry, the artist moved to working with various natural materials —vines, bamboo, hemp — that she personally harvested. The resulting sculptural installations were shown in museums, galleries and sculpture parks throughout the United States, establishing along the way her signature style. Since they were made from biological material, many were only temporary creations. “They were site-specific, and I ultimately let them disintegrate in place,” she says with a shrug. “I never sold any art. It was never about the product, it was about self-expression.” Meanwhile, the grants and the murals took care of the necessities of life, so much so, in fact, that she was able to buy a little farmhouse on the Maryland coast.

That’s when her perspective began to change. Following the death of her partner and living alone by the shore, the artist re-evaluated both her life and her art. This reflection, coupled with the beautiful sights of sea, shore and sky, eventually brought her back to her first love — painting. Then life changed again in 2006, when she married Texan Charles Ditto, who teaches musical composition at Texas State. The couple now live on a 13-acre property near Seguin, and the transplanted New Yorker loves it. Her former bio materials have been replaced by oil paints and canvas with which she creates the majestic cloudscapes —which she calls “horizon lines” — that so charmed Saidi. Benitez is now represented by four commercial galleries, including one in Atlanta and Gallery Nord here.
The work for GAGA is her voluntary contribution to the organization that’s clearly close to her heart. At the time of this Interview, she was preoccupied with the production of the catalog for the Rainbow show, the first ever for GAGA. The project was made possible through a small grant from the city plus an anonymous donation. “This got me really excited,” she notes. “It’s a new learning process. If the catalog sells well, we’ll have lots of money in the bank, then we could make a coffee table-size catalog that celebrates all the members. That would be wonderful!”

So what are her hopes for GAGA’s near future? I ask.
“Actually I am shocked by how much we have already accomplished,” she replies. “For the future, I would like us to have a home where members could have regular exhibitions and forums, maybe with studio space and classrooms. I am growing with the organization. Maybe we’ll expand beyond San Antonio. I am sure we are not the only city that has a lot of talented women artists.”

We spoke to the women leading the fight in San Ant

This Mindful Monday with Mel🌿 We are bringing a