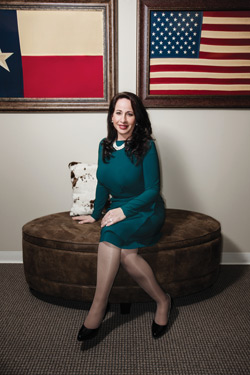 On the day that Veronica Edwards received her MBA from the University of the Incarnate Word, her father presented her with a special gift — a brown-paper envelope, which she assumed contained money. Instead, what she pulled out was her first-grade report card listing the reasons why young Veronica had to repeat the grade. Veronica talks too much, she is always daydreaming, and she doesn’t follow directions, said the card. Ah, teachers! They can be wrong even when they are right. Today, the girl who failed first grade is one of the most successful businesswomen in San Antonio, and her company, InGenesis, is the fastest-growing health care staffing company in the country and the second-fastest-growing human resources firm in the entire staffing industry.

Vivacious and, yes, talkative, Edwards — born Muzquiz — doesn’t deny that the teacher was right. But she also recognizes that the traits listed on that report card, viewed slightly differently — as imagination, ability to communicate and think outside the box — have helped her rise over adversity and get to where she is now.

When I arrive to interview her at the InGenesis offices on Martin Luther King Jr. Day, she is the sole person there. Everybody else has the day off. The quiet is good for work, she observes as she gives me the tour of the facility, starting with the lobby decorated in Texas ranch style. A bouquet of flowers sits in a boot vase, the chairs are upholstered in doeskin, and cattle horns are lined up above plaques documenting the company’s rapid growth. There’s also a letter from Gov. Rick Perry congratulating InGenesis on its 15th anniversary.  “Most of our clients come from the North, so when they come to Texas, this is what they expect to see,” explains the friendly CEO, indicating the space around us. Sixty-five people work at the San Antonio headquarters, while another 1,500-plus are scattered across the United States. Among them are physicians, nurses, physician assistants, lab and equipment technicians, research personnel and other health care professionals. In the jargon of the industry, InGenesis provides “talent acquisition and workforce solutions” for a variety of governmental, commercial and nonprofit health care clients. In other words, they find, recruit and place health care professionals — and some others — in jobs at hospitals, clinics and research institutions and also manage entire clinics or large-scale multi-clinic programs. “Sometimes we essentially serve as the HR department for a client, and other times we provide supplemental staffing,” says Edwards. “Most of these people are our employees with benefits, 401ks and all. There is also what we call direct hire, where an employee we found is taken on by the client as a permanent employee.”

For instance, InGenesis runs a wellness clinic and a health fair for the employees of the Office of Naval Research and Defense Advanced Research Projects Agency (DARPA) in Virginia. The emphasis there is on preventive care, education, flu shots, immunizations and health information. Here in San Antonio, the company has provided temporary professional, technical and administrative employees to more than 100 departments and offices at the UTHSCSA since 2004. In addition, InGenesis has won huge contracts from the Department of Defense and the U.S. Immigration and Customs Enforcement Health Services Corps. The latter involves providing both medical and program management staff for 21 ICE clinics. In order to deliver nationwide services, Edwards and her colleagues employ a variety of approaches, from advertising and attending functions to reading professional journals, research and “a lot of networking.” She attributes InGenesis’ fast rise to the top to her decision to surround herself with recruiters and other professionals from a variety of industries, not just from the workforce field. “I like to apply best practices from other industries. That’s how you get new ideas to help you move to the next level,” she explains. One practice that has been useful is to have employment law attorneys run InGenesis’ HR department. “Their expertise protects both our employees and the clients,” she says. “As a company we must be fair and compliant in everything we do. That builds the foundation for a strong cooperation, which has sustained us for 16 years. That’s our way of watching for everybody’s best interest.”

As a leader and entrepreneur, Edwards has received much recognition, including the 2013 Ernst and Young Entrepreneur of the Year award and the 2011 U.S. Hispanic Chamber of Commerce Businesswoman of the Year title. That same year, Inc. Magazine named her one of the Top Ten Female Entrepreneurs. 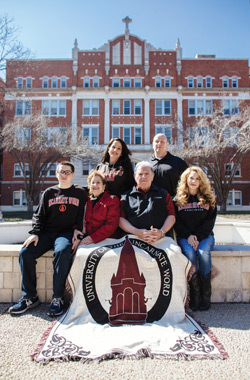 Laid off, she reinvented herself

Edwards credits her mother, Alma Muzquiz, for her first business lessons. “My mom was in real estate, and she would go door to door in the neighborhood and give people her card,” she recalls. “That’s never going to be me, I thought. I could never do that. And yet today I am pretty much doing what I saw my mother do. My mother was aggressive, my dad (Ray Muzquiz) was more methodical. In retrospect, I appreciate what I learned from both of them.” Following college, Edwards started working for SBC in telemarketing. Her practical bent was already in evidence. Though the job was below her skill level, it was a way to get a foot in the door. Eighteen months later, she moved to the wireless division sales, rising to director of strategic marketing by age 24. After more than 10 years with SBC, however, her job disappeared amid corporate restructuring and layoffs.

What to do? Starting her own business appealed to her. It so happened that her former bosses asked her to help with a staffing project in telecommunications, which ironically led her to realize that the telecommunication “bubble was about to burst.”  Health care looked a lot more promising. Working from home around her young daughter’s nap schedule, the new entrepreneur soon landed her first client — the Mayo Clinic, no less. That was a confidence booster. To support her fledgling enterprise and help with the family budget, she took an evening teaching job for a while since her husband, Bryan Edwards, was also “downsized” a month after her.  One story illustrates her determination better than anything. Just after she gave birth to her son, a hospital she had been trying to get as a client for three months called, asking her to come to a meeting, like the next day. Her baby was barely three days old, but the new mama showed up. “When you are growing the business, you do what you have to do,” she notes. Despite her present success, Edwards is not one to rest on her laurels. Not only is she always thinking of how to extend her company’s reach — to other industries and global markets, for instance — she is also pursuing a doctoral degree at UIW that fits with her business objectives. Her thesis is a global study of the reasons and conditions that may influence health care workers to respond or not respond to a biological, chemical or nuclear disaster. The study could help institutions prepare for such emergencies. “I never want to stop learning and setting an example for younger people,” says the CEO.

She is setting an example in other ways as well. After a brother died of diabetes a few years ago, Edwards and her daughter, Sydney, have both taken up the cause of diabetes research and have involved the entire company in the annual Step Out: Walk to Stop Diabetes that raises funds for the local chapter of the American Diabetes Association. In addition, as a UIW trustee, Edwards is engaged in helping the school get its osteopathic medical school off the ground.

Since she’s in a good position to evaluate the impact of the Affordable Care Act on medical services, I can’t resist asking her what she thinks this impact will be. After some hesitation, she first talks about her own company: “We have already taken measures to reduce costs so we will be able to absorb additional expenses. Clients don’t want to see their rates go up. What we have today is already compliant with ACA … Five years from now the medical industry will be different. In the hospitals, doctors may be replaced by physician assistants or nurse practitioners. We’ll have to see. Moving forward, I would say, it’s increasingly important for people to learn to be part of their loved ones’ health care. All of us will have to be part of the solution. There may not be enough health care professionals to do it.”