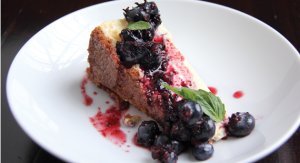 The pizzas have personality

The Spanish term barbaro — accent on the first “a,” can mean exactly what it sounds like: awful, terrible and, yes, barbaric. And, more popularly, it can mean the opposite: great, wonderful …We don’t know what Charlie Biedenharn and Chad Carey, the often irreverent folks behind The Monterey and now the Monte Vista restaurant Barbaro, had in mind, though we assume that terrible wasn’t uppermost in their thoughts. We, in any case, come down more on the cool side.
Not that everything works perfectly. None of the house cocktails has yet exactly done it for me — though they keep changing, and I’m willing to keep trying. And I’ve had a couple of disappointing salads, notably one with cold-roasted cauliflower and ricotta salata that didn’t do enough to one of the food world’s current cruciferous darlings to make it interesting, and another with allegedly roasted sweet corn and an anchovy dressing that seems never to have made the acquaintance of Barbaro’s oven. (I have, however, liked a very good chopped salad with a punchy dill dressing and another with fennel, purple cabbage, marcona olives and more.) But maybe that’s because said oven was too busy cranking out the pizzas, which are Barbaro’s real stock-in-trade. Fans of Southtown’s El Monty will be primed for the fact that these are not your nonna’s pies, however — witness one with tallegio, hash browns, kale and honey. Yes, I know kale is another hipper-than-thou ingredient these days, and I have actually had trouble convincing friends to order this one. But it frankly works, with just enough honey to balance out kale’s virtuous greenness.

It doesn’t hurt that the pizza dough has been custom-tailored by Bakery Lorraine, of course. But in the long run, it’s the toppings that make the pie. Another combination to be recommended, assuming it stays in rotation for a while, is the one featuring both oyster and lobster mushrooms with fior di latte and boucheron cheeses drizzled with porcini mushroom oil. As there have apparently been confusions, our waitress was at pains to point out that we were talking mushrooms here, not seafood. Got it. And loved it, too; the combination of the mushrooms and the ‘shroomy oil made for a meatier taste than many a sausage pie past. So if I personally found merely very good another pizza composed of summer squash with garlic, eggplant, ricotta salata and chili, well, that’s what makes horse races; you might love it. I’m still trying to make up my own mind about a daily special that was lubricated by, if I remember correctly (sometimes I actually do go to a restaurant just to enjoy myself — which means no note-taking), the fat from a strip or similar steak. Almost too good was the impression that lingers most.

Barbaro, by the way, is the current incarnation of a former coffee house called The Foundry, and though the shell remains the same, the vibe is altogether different than it was when the Baptists were blessing it. Especially impressive is the exposed ceiling structure that looks improbably impeccable for a vintage structure. It all makes for a place that’s fun to relax in with ‘hoodies and foodies alike — even if pizza’s not on the agenda. The beer list that was once printed is said now to have been rendered obsolete by its frequent changing, so just ask your knowledgeable server and take advantage of new opportunities.
So far the small but expectedly eclectic wine list (Carey is known for unabashedly pushing wines such as riesling, Beaujolais and sherry at El Monty) remains printed. It, too, may change, but a favorite has been the gutsy Nero d’Avola, a Sicilian red. (I’m not a fan of wines served in tumblers, especially when they can reach $10 a pop, but the glassware does match the mood.) Whatever your choice, there are simple snacks such as the lusty, marinated cerignola olives and various cheese plates to help while away some idle hours. Also available are some pricey but exotic plates featuring tinned Spanish seafood such as clams and eels. Personally, I haven’t yet taken that plunge, especially at $39 for the anguillas.

Nor have I ever made it as far as dessert. Risky, though perhaps rewarding, might be the rosewater (which can easily get out of hand) and amaretto panna cotta. Well, why not; have it with a glass of Gerard Bertrand Cremant Rose and see if you say “qué barbaro!” Could happen.