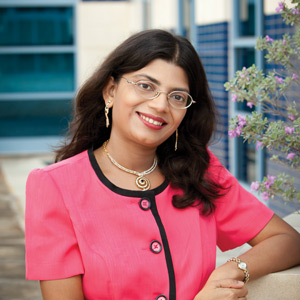 If there is one message that Paromita Datta, M.D., hopes to convey to her patients, it’s that “Cancer is not a death sentence.” As medical director of the Aurora Breast Care Clinic, she has to deliver her share of unwelcome news, but nearly always, she says, “There are things we can do. There is life after cancer.” Dr. Datta, who was brought up in West Bengal, India, grew up “knowing I liked to be with people, helping out.” That soon translated into an ambition to become a doctor or a nurse, like some of her extended family. Because Bengal is one of the most educationally advanced parts of India, she had her parents’ support in pursuing the schooling she would need to enter one of the health professions.

She spent 10 years at a Catholic school, where she learned to speak fluent English and became accustomed to “Christian and Western culture.” For medical school, she attended Calcutta Medical College of Calcutta University in the city now known as Kolkata, doing her internship rotations there and working in the teaching hospital’s many clinics.

To continue her medical training, Dr. Datta says, “I always knew I wanted to go to the United States, because this is where the cutting-edge research is being done.” Her first stop was at Baylor College of Medicine in Houston, where she conducted a clinical research study on type 2 diabetes. She continued her education at the University of Texas Health Science Center, where she followed a residency in internal medicine with a fellowship in hematology and oncology (the treatment of cancer). “I had very supportive teachers and professors, and the staff was very nice to me,” she says. “It didn’t take me a long time to get used to being here. In fact, it felt almost natural.” Dr. Datta didn’t find much different about her American patients, either: “When people are sick, they’re scared. The way we practice medicine may be different, but everyone wants to get better.” 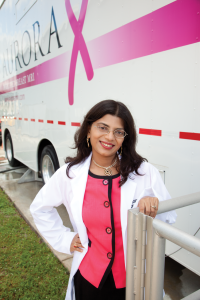 Board-certified in both internal medicine and oncology, Dr. Datta has chosen to pursue the latter, although she acknowledges that “cancer is a hard diagnosis.” She chose her specialty, she says, because “There is so much going on in this field, both in research and in treatment.” In her present job, she is involved with patients at every stage, from cancer prevention through many kinds of treatment. She draws on all her past training to work with patients with different kinds of malignancies, including not only breast cancer but lung, colon and stomach cancers, as well as lymphoma, leukemia and multiple myeloma.

“Research is showing us that this is not one disease but many different diseases,” says Dr. Datta. On the most positive side, she says, “Internists often work with patients who have conditions like diabetes and high blood pressure. Those are diseases you can control but not cure. In many cases, it is possible to cure cancer.” Early detection often is crucial to a good outcome. Of the one in eight women who develop breast cancer, only 15 percent have a family history of the disease, so she recommends that all women get a yearly mammogram after age 40. “It should be a regular part of your life, like changing your smoke-detector batteries or taking your car for a 10,000-mile checkup,” says Dr. Datta. “Yes, we are often scared to get (the mammogram) done, but if there is something there, we can take care of it.” She suggests making mammograms “as much a part of your routine health care as getting your teeth cleaned.” One of the most frustrating parts of her job is to have to tell a patient she has stage 4 cancer, “when surgery is now impossible, but we might have been able to operate if we had caught it earlier.” Another aspect of prevention is leading a healthy lifestyle — maintaining a healthy weight, eating lots of fresh fruits and vegetables, getting enough Vitamin D and calcium through diet or supplements, taking a daily low-dose aspirin and learning to do monthly breast self-examinations. Women who have been told by their doctors that they have dense breasts or who have experienced fibrocystic changes might benefit from a yearly MRI, instead of or in addition to a mammogram. At the Aurora Center, patients have access to a dedicated breast MRI, which can be more accurate than a mammogram. “This center was set up by Dr. Lillian Chou, an oncologist who’s also a breast cancer survivor,” says Dr. Datta. “Her cancer was missed on a mammogram, so she came up with the idea of an entire machine dedicated to breast cancer screening.”

For those who have even one or two first-degree relatives — a mother or a sister — who have had breast cancer, Dr. Datta advises genetic counseling, since the lifetime risk of developing the disease for those who are found to carry the BRAC gene is as high as 80 to 90 percent. At Aurora, she helps such patients calculate their risk assessment and consider their options, from MRI screening to preventive medication, such as tamoxifen, or even preventive surgery, up to mastectomy for both breasts. Cancer care “does not end with diagnosis,” says Dr. Datta. Even in the decade she has been practicing medicine, she says, “There have been so many advances in breast cancer and other kinds of cancer. Researchers have developed targeted therapies that identify cancer cells and kill those cells, not others, so there are fewer side effects.” New, nontoxic “smart therapies” developed from lab-invented molecules are different from chemotherapy and may be better tolerated by patients. Dr. Datta is finding her choice of specialty “very satisfying. I wanted to take care of patients, be there for them,” she says. “ I like to guide patients through their treatment to help them fight and cope with cancer. Sometimes they win their battle; sometimes not. There are some situations where you may not be able to win your battle, but you may be able to manage the disease for many years.” 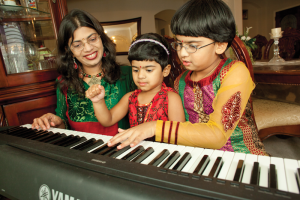 She makes sure her patients understand that she is available to them at any time. “They can reach me at any time of the day,” she says. “If they are running a fever on chemo or if some symptom like diarrhea has gotten worse, I can call in antibiotics. We can take care of it immediately. Sometimes those calls save lives.” A typical work day for Dr. Datta is a long one, starting when she drops her two daughters, Shreya and Ariana, at school. She usually arrives at the clinic at 9 a.m. for a full day of appointments with new and returning patients, until 5 p.m., when she leaves for at least two hours of visits with patients in downtown and Medical Center hospitals. Her husband, Sohom Chaudhary, an engineer, usually takes care of the children after school. “He supports my career 100 percent,” she says. “We adjust. We have to plan ahead of time to make everyone’s schedules work.” The couple met in India; while their parents knew each other, it was not an arranged marriage, as is sometimes the custom in their native country. “We met and started dating and fell in love just like anyone else,” she says, smiling.

Dr. Datta’s husband first moved to the United States two years before she finished medical school, and she joined him shortly after graduation. Both decided to stay and build their careers and family life here and have become U.S. citizens. They visit family in India, where Dr. Datta has previously worked in rural health camps and in a flood relief program. When her children are older, she’d like to spend a few weeks to a month each year providing her expertise in oncology in an Indian hospital. But she doesn’t expect to return to India permanently. “I miss my parents and my friends,” she says, “but we like the States. Our life is here.”

In the future, she says, “It’s my dream that someday we will be able to prevent cancer.” Until then, she hopes that doctors and patients alike will gain a greater understanding of the disease, “so we can prevent it before it even develops.”