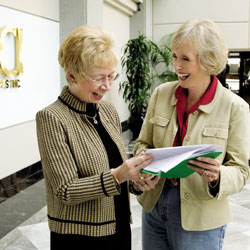 Twenty years into a successful career as an executive with Eastman Kodak’s health care division, Catherine Burzik could have stayed right where she was, but the company she’d been devoted to all those years was moving in a new direction, and she wondered if it was time for her to do the same. “The easiest thing is always to stay right where you are,” she says. “I could have stayed and retired, but I needed to do more, and I needed a change.” Many in Burzik’s circle of friends thought she was considering the unthinkable. In Rochester, N.Y., lives and careers centered on Eastman Kodak, and most people there couldn’t imagine a different picture. “They would never leave a job, their home and their community. I was definitely out of my comfort zone,” she recalls. She remembers the ease of the familiar: A long tenure with an established company and the jolt she felt when she realized that the company was changing and she needed to move on. “I lost my naïveté about things like job security, but I also wondered if I was checking out,” she says. After much soulsearching, she had an opportunity to join health care giant Johnson & Johnson; she and her husband left their home in New York for the first of several moves.

BREAKTHROUGHS
That was in 1997. That first big step gave Burzik the courage to take greater leaps. She left health care to lead a lifesciences company in California that developed the instrumentation that sequenced the human genome. The company had had a role in one of the biggest scientific breakthroughs in history, but it was also a company in crisis when she came on board. It had focused too narrowly on that single instrument; now that the genome had been revealed, there was no further need for its product. The company could have been dead in the water, but Burzik was convinced of the potential for new products and new markets. She just had to persuade stockholders. She pushed at exactly the right time, just as a broad range of industries realized how DNA “fingerprinting” was their own essential next step. In her first year there, stock prices jumped 40 percent.

Burzik had turned the company around, and in doing so, she learned a lot about investor relations. It was time for her next big step. She knew that she wanted to return to health care, and she narrowed her search to publicly traded companies that were in a growth mode. In 2006, Burzik accepted the job of CEO with San Antonio-based Kinetic Concepts, Inc. The company manufactures medical devices — specialty beds and other therapeutic products designed to aid and accelerate the recovery of patients with surgical and other types of wounds or tissue damage. Founded in 1976 by local physician Dr. Jim Leininger, the company began by producing devices that quickly became the standard of care, and in the last decade, KCI had emerged as a global medical technology company. For Burzik, KCI was just what she wanted; it was a health care company, first and foremost. It was a public company. There was no crisis, it was the right size, it had posted healthy growth figures and was on the brink of even more progressive growth, especially in emerging international markets.

In addition, the company — which just observed its 30th anniversary — had a strong business foundation that centered on innovation and envisioning potential for new technologies and new products. She was intrigued and excited at the possibilities. Her question going in: “What can I do to write the next chapter?” 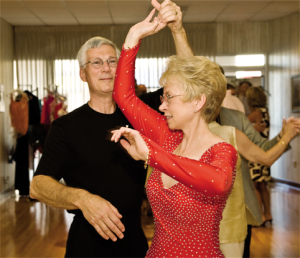 LEADERSHIP FIRST
Cathy, as she’s known to all, starts each day deciding what will happen that day to move KCI forward. “When I came into this job, I needed to know what I wanted to accomplish as a leader,” she says. The business objectives were global. Burzik immediately saw opportunities to increase market penetration of KCI’s conerstone therapeutic products domestically and abroad, particularly in Asia, where use of therapeutic medical devices like the ones KCI manufactures is growing on a steep curve.

She also saw a bigger need for the company to diversify through added revenue sources. That meant she had to search for potential new business platforms that were compatible with the company’s foundation and direction. Successes in both of those areas brought increased shareholder value and doubledigit growth for the company in 2007, Burzik’s first year on the job. Earlier this year, Burzik was instrumental in KCI’s acquisition of LifeCell, a company that specializes in tissue regeneration. Its products are used for skingrafting techniques and reconstructive surgeries. It was KCI’s largest acquisition to date. Burzik calls it a “bold and brave decision,” but adds that LifeCell’s technologies and products are complementary to KCI’s core offerings, and it simply made logical sense to bring LifeCell into KCI’s fold.

Burzik sees the big picture, but she’s also hands-on. Her style prompts her to dive deep to understand KCI’s people and its products. Energetic and curious, she routinely seeks the expertise of the company’s subject matter experts — product developers, engineers and medical staff. “I need to know the technology, the products and the science if I’m going to be a credible leader,” she explains. She prefers the structure of “horizontal teams,” which allows her to distribute power across the organization and emphasizes performance and accountability. “If I have the right team, I don’t need to be in control,” she explains, adding that working this way generates knowledgesharing and creativity and fosters collaboration, candor and feedback. Burzik strives for accessibility. As a leader and a decision maker, she’s logical — direct and matter-of-fact — but she balances it with sincerity and a warmth and openness that quickly put people at ease. To get a feel for employee attitudes, she simply takes an elevator ride. “I measure KCI by the elevator,” she explains. “That’s where people talk, and I want to be there.”

Employees are comfortable carrying on the conversations in her presence; Burzik thinks the ease comes, in part, from KCI’s traditional lack of a stiff hierarchy and the company’s deep-rooted focus on the end consumer — the patients who use their products. “When everyone in the organization is focused on the patient, the dialogue comes more easily, and people are more interested in sincere, productive exchanges than internal griping,” she says.

Burzik still marvels at the open internal communication channels — as the volume of e-mail she receives from employees will attest — but she is also amazed by the emotional connection patients make with the company. “I was traveling not long ago, and a pilot hugged me in the middle of the airport because a KCI device helped his wife,” she says. Burzik is learning that the public embraces, anecdotes and the success stories are commonplace for longtime employees. It tells her that what motivated KCI employees 30 years ago is still what motivates the company today.

“Most medical device companies know products. They know the hospitals and the doctors — the people who buy and use the products. The difference is that we know the patients. I don’t want to lose that patient-centric culture,” she says.

OPEN DOOR
Burzik points out that the health care industry has traditionally been a maledominated field, but that, on the consumer side, women are the decision makers about health care and related product purchases. That gap left a door wide open for Burzik to walk through when she began her career in the 1970s. Armed with both a bachelor’s and a master’s degree in mathematics, she confesses an affinity for the logic of numbers, and because so few women choose a math/science field of study in college, she urges young women to move in that direction, no matter their long-range aspirations. “I don’t necessarily use the math,” she says, “but having that background hones your thinking power and helps you become a better problem solver. It’s helped me move forward as a leader.”

As the health care industry has evolved, so have professional roles for women in the field. “It’s a lot easier than it was, even 10 years ago,” she says. Earlier in her career, perhaps in part because there were relatively few women in the industry, Burzik didn’t devote much time to mentoring other women, a role she sees as critical today. “I take the time now,” she says. “The lack of role models for women means people like me have to provide the hope that with enough perseverance and tenacity, women can do this.”

THE “US” FACTOR
This refers not only to Burzik’s professional successes, but her personal ones as well. “My husband, Frank, has agreed to make all of these moves with me,” she says. “I consider myself fortunate; a long time ago, we decided that we had to make decisions based not on what’s right for me or him, but on what’s right for us.”

Burzik’s husband, a retired electrical engineer, manages the domestic side of life for the couple. She emphasizes the importance of making decisions with her husband of 37 years by pointing out that most women at her professional level fall into one of two categories: women whose husbands are comfortable in a supporting role and women who are not married at all.

Their free time has them clearly in step with one another; as amateur ballroom dancers, they compete in events across the country. The couple always enjoyed dancing, but wanted to learn Latin dances; a few years ago, they joined a local dance studio. They dance together in the studio several times a week and spend additional time with their instructors. They recently returned from competitions in Las Vegas, Hawaii and closer to home in Austin.

“Our favorite dance together is the fox trot,” she says. “At this point in my career, quality of life is very important to us as a couple, and we have that. We have time to do good things together, and the payoff is a better balance between us.”

Celebrating and embracing our communities a little