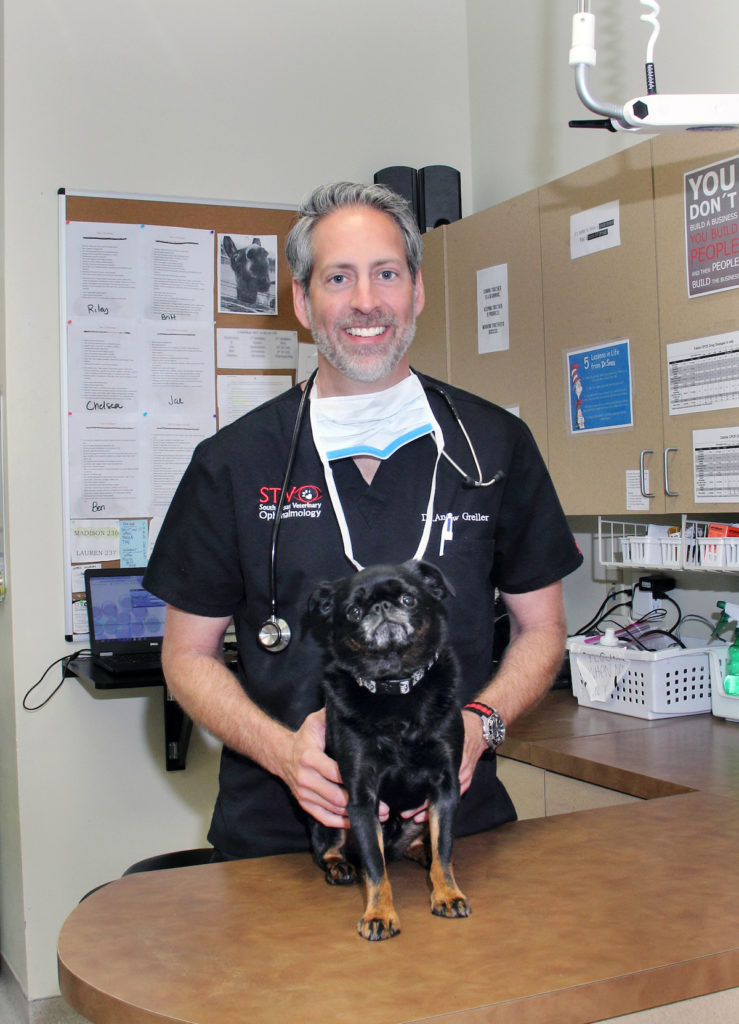 “My long-term goal is to impact society to think about our day to day choices and wrap the animal world into that.”

For the last ten years, Dr. Andrew Greller has been leading the field as the only board-certified veterinary ophthalmologist in all South Texas. It’s a niche career that has him helping loyal canine companions, and also the occasional exotic animal that comes his way from local not-for-profits, like the San Antonio Zoo, where he serves on the board.

The journey to his career and now his future goals have all been fueled by a passion for animals and the fragile ecosystems they call home. He’s also taken his passion and combined it with his wife’s love of art, helping local artists and animal rescues in the process. From a small boy who was enthralled watching Jacque Cousteau, Greller is now busy as a husband, father of two, managing a dog, two bearded dragons, a koi pond, and a thriving business. It is clear that Dr. Greller dedicates his life to the things that truly matter to him.

Why did you become a veterinary ophthalmologist? It’s such a unique career.

When I was a kid, I was sent to the emergency room after a classmate in art class threw some glitter in my face. I saw an ophthalmologist there, and I just remembered him being this really nice person who made all the pain go away. Later in life, my Dad had some trouble with his eyes, and I went along with him to an appointment and was just fascinated with all the tools and technology being used. Also, at a very young age, I developed a strong interest in science and nature. I remember sitting as a kid watching Jacques Cousteau on television and finding it so interesting. I later went on to study ecology in undergrad, then earned my doctorate in veterinary studies. To me, there’s just something about the eyes of an animal. When you come home from a hard day, you look at your dog, and you look in their eyes. You make a connection with them. Whether it’s the dog or a Toucan in Costa Rica, we have this beautiful connection naturally with these creatures. It’s almost as if we’re speaking a language when looking into each other’s eyes. There’s an understanding there. Endorphins are released, and there’s this essence of time that these animals have been around for millennia.

Your wife, Faryl, is an artist. How have the two of you combined your passions to better San Antonio?

While my wife isn’t currently creating art, she is curating it, and one way we’ve decided to join forces is to turn the office into the Greller Gallery. We bring in art from local artists, and it’s all animal and nature-themed. We change them out quarterly, it’s typically 15 to 20 pieces, and they sell really well because those who are coming into the clinic are animal lovers. The proceeds from the art go directly to animal-related causes here locally. We’re so proud to have raised $60,000.

You’ve treated and worked with all sorts of animals, what’s your favorite?

For a domestic animal, it would have to be the dog because I spend so much time with them. I see first-hand the therapeutic aspect of it. I’ve met blind people who now have mobility and freedom as well as a life they never dreamed of, thanks to the incredible bond with their guide dog. The skills dogs have are just remarkable. They do so much for mankind, and they love you and forget your worst moments. Maybe you forgot to walk them, or you yelled at them for peeing on the couch. They still continuously love you for the person you think you are. As far as wild animals, if I could meet one, it would be an Orangutan. They’re so much like man. They are intellectual and care for their young the same way we do. If I were to have an encounter with one, it would be truly amazing.

Your passion for animals goes beyond just treating their eyes. What other plans do you have for the future?

During my undergrad studies, I focused a lot on ecology. It fulfills a huge interest of mine to protect the ecosystems where these animals live. If we don’t protect their cultures and environments, these beautiful creatures will disappear. I have a goal down the road to write historical fiction about what’s going on around the globe with habitats, the demise of ecosystems, and how the day to day choices we make as consumers play a role. I want to write a book about what we can do as consumers to try and protect this planet, which unfortunately we’re just pillaging and not thinking much about. My long-term goal is to impact society to think about our day to day choices and wrap the animal world into that.