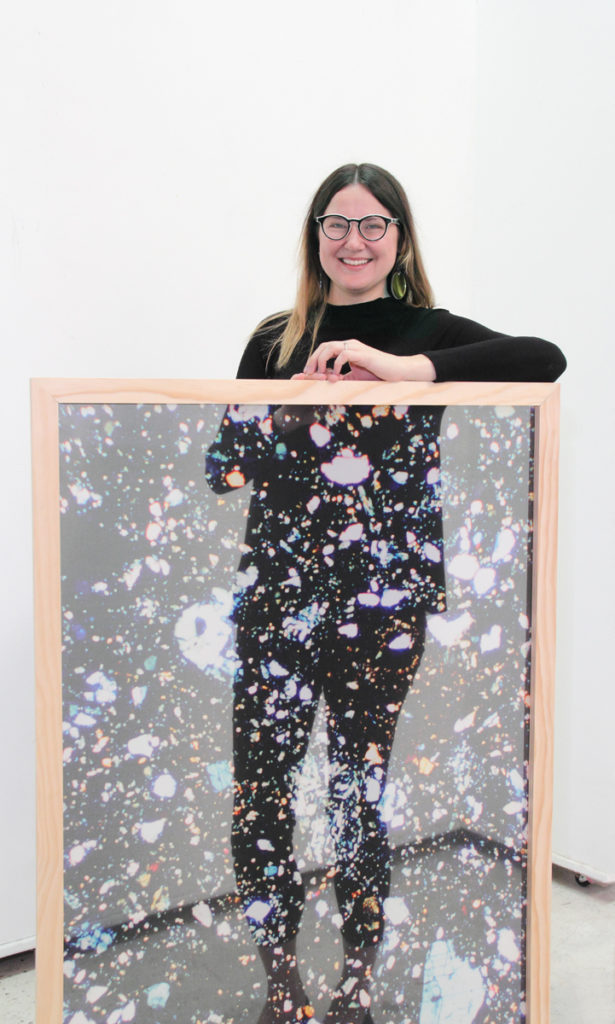 Artist Amada Miller has a studio and living quarters at 1906 S. Flores, in the building that can be considered the anchor of the South Flores Art District. She greets me at the door and gives me a short tour of the premises, explaining how owners Andy and Yvette Benavides, who run a picture frame shop in the building, have contributed to the development of the area as San Antonio’s newest art hub in Southtown. Her own studio – which she shares with fiancé Nicholas Frank – is one of 10 in the building, and many more can be found in the vicinity.

Known as a fiber artist, Miller has recently returned from
Berlin, Germany, where she spent three months as one of the
resident artists at Künstlerhaus Bethanien, a nonprofit organization that is known worldwide for its international residency program
for artists from different nations and disciplines. The organization partners with art centers around the world, including San Antonio’s Blue Star Contemporary Art Museum, which select local artists
to send to Berlin each year. For Miller, it was an exciting and
transformative experience.

“Berlin was an opportunity to explore a different path in my art,” she said. “For the first time, I had the freedom to explore different media, time to read and experiment, time to think about new things. It expanded the way I approached my work.” Following up on a long-standing interest in cosmology, she sought conversations with scientists who study the origin and evolution of the universe, all of whom were willing to share their knowledge with her. She eventually focused on the Berlin Museum of Natural History, where she worked with a scientist who was also a curator and, as such, interested in presenting the science to an audience in an understandable way. There, Miller discovered a collection of meteorites. These were located
in the museum’s east wing, which was bombed by the Allies in 1945. Though the meteorites themselves survived the bombing, all the documents about their provenance were destroyed. She started making castings of these space rocks in various materials, such as iron or glass, and is now continuing that work in her studio, in preparation for an exhibit she and fellow Berlin residents will have at Blue Star next summer. “I want to include their story, the bombing, but I am still figuring out how they will be exhibited in the gallery,” she explained,
showing me a couple of the castings. She would like to connect them with the story of Earth’s evolution and the origin of water, which made life possible on our planet.

However, she is also working on another show that will be opening in December at Sala Diaz. This one will focus on what she calls her “paintings,” though no brush is used in creating them. Several are on display on the studio’s long wall, including two that look like intricate cloud patterns in the sky. She generates that effect by freezing the dye in ice cubes and subsequently letting it melt over the canvas. The effect is visually dramatic. Another piece, “Deep Field,” consisting of several fabric panels arranged together, is produced by a different dyeing technique to create images of constellations against an indigo blue background. The “Deep Field” series that she is developing is based on images obtained by the Hubble Space Telescope, she explained. “The Sala Diaz exhibit will feature this outer space imagery,” she said. “I am just experimenting and exploring, and enjoying the process.”

She Discovered Art in San Antonio
While growing up in Austin, young Miller was not exposed to the arts – no gallery or museum visits – but her mother was a creative type who liked dance and writing, and worked on craft projects. Upon graduation from high school, Miller went to work for the Apple Corporation, but at 25, the young woman decided to move to San Antonio to start a new chapter in life. That’s when she enrolled in a graphic design program at San Antonio College, which included a requirement to take a drawing and painting class. “I fell in love with it and started taking more and more art classes and fewer graphic design ones,” noted Miller with a chuckle. “Then, I went to the Southwest School of Art to study printmaking. I had this need to learn everything.”

“There is so much more art in San Antonio than in Austin, and people are more welcoming, more open to newcomers,” she continued. “The first weekend after I moved here, I came to this area for the Second Saturday openings (an art walk-type event). That was when the Flight Gallery was still in this building. I went in and thought I would really like to have a show here someday, and two years later I had my first show there.” Even before that, however, the enterprising newcomer had opened her own little gallery in her then-studio “out of sheer need” and a desire to connect with the art community. It worked well for her. Since that first solo exhibit at Flight in 2012, Miller has had seven other solo shows and has participated in numerous group shows in such places as Blue Star, the UTSA Gallery, Artpace, and even at the McNay.

To help support herself, the budding artist took a job at Artpace in 2013 as a communication and graphic design coordinator, and, as luck would have it, met and fell in love with Frank, who was an artist in residence at the center two years ago. (A wedding was being planned at the time of this writing.) “I feel really grateful to Artpace for that,” she quipped. She said she is also grateful to Berlin for motivating her to make changes in her professional life in order to focus more on creative work. She quit her Artpace job and closed the little gallery. “Right now, it feels good to work in the studio and create,” observed the artist. “People seem to love what I make, and they buy it. I just sold a fiber painting last week, and, of course, I have exhibits coming up.”

However, there’s one more change that she wants to implement. In Berlin, Miller observed that the Germans “take their Sundays very seriously,” and incorporate leisure time and informal socializing into their days. “I noticed that people congregated on this one bridge near the Bethanien and on the bank of a nearby canal every evening just to hang out and chat with friends,” she said. “I had never seen anything like that before, people gathering for no apparent purpose. So, what I learned from the Germans is to respect the need for free time, time away from work.”