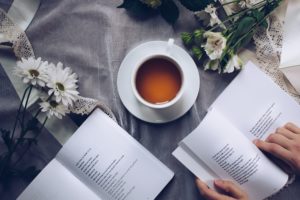 There has been an insane amount of rain in the Alamo City the last few weeks! Actually, most of Texas has gotten an unusual deluge brought on by a very active hurricane season and a lot of moisture out in the tropics. If you’re not a fan of rainy days, this may seem unfortunate. However, if you’re like us here at SA Woman, then you’re probably singing, “Rain, rain, please don’t go away!”

Alright then, moving along.

We’ve been enjoying the cloudy days and decreased temperatures brought to us by the last two extra-wet weeks, and personally, we’re not looking for them to go away any time soon. There’s nothing quite like a nice, rainy weekend spent curled up on the couch with a good book, a cozy blanket and a yummy candle casting shadows on the wall, all backed by the tune of rain pelting against the window. We’re starting to relax just thinking about it, honestly.

This weekend is shaping up to be one of those weekends, if the forecast is to be trusted (which is always a tenuous trust at best). With showers and thunderstorms likely tonight, tomorrow and possibly on Sunday, you can bet we’ve got a list of books waiting to be read and coffee waiting to be sipped.

If that sounds like the kind of weekend you’ve been needing lately (we know we have!), then this is for you, our rainy-day soul sister! We found four books that fit into a dark, rainy day perfectly, full of suspense, intrigue and women worth reading about. Plus, we threw in this yummy recipe for your own homemade pumpkin spice coffee – because we can’t forget to celebrate fall, can we? 😉

Best Books for a Rainy Day

The Silence of the Girls by Pat Barker

Taking a look at the women not often seen in Homer’s masterpiece The Iliad, Barker weaves the tale of Briseis, a queen captured by Achilles in the throes of the Trojan War. As is custom with many historical tales, the lives of the women behind the scenes often get swept under the rug in favor of the stories of the soldiers and kings. In The Silence of the Girls, Barker does the opposite. She gives life to these women, some slaves, some nurses, some prostitutes, and tells the stories erased by history through the eyes of Briseis. The Silence of the Girls is a powerful tale of Briseis’ fight for her country, her people and her own survival.

For her debut novel, Mangan’s mysterious thriller set in the exotic land of Tangier, Morocco, focuses on the friendship of Alice and Lucy. After a sweet reunion, things take a sinister turn as Lucy begins to encroach on Alice’s life in a terrifying way. After Alice’s husband goes missing, everything – her friendship, her life in Tangier, even her own mind – becomes dark and questionable. With Scarlett Johansson tapped to star in the movie adaptation of this book, now is the perfect time to check out this suspenseful page-turner.

If you’re needing some dystopian drama to cure your Handmaid’s Tale withdrawals, Vox may be the right prescription. In a future that’s set not too far away, women are only permitted to speak 100 words a day. Eventually, women are unable to hold jobs, and girls are barred from learning to read or write. Dr. Jean McClellan, however, refuses to back down easily. She will fight for her voice, for her daughter’s voice, and for every American woman now facing this uncertain future.

The Woman in the Window by A.J. Finn

If Paula Hawkins’ psychological thriller The Girl on the Train piqued your fancy, then you need to pick this book up and devour it right now. After suffering a traumatic experience more than a year ago, Anna Fox now lives alone in her New York City apartment, trapped by agoraphobia and alcoholism. Spending her days with nothing but classic horror films, wine and prescription pills to keep her company, Anna passes her time by watching her neighbors through her window. One day, however, Anna sees a crime take place, and it puts her in immense danger – and yet, her substance abuse and own mental shakiness keep her from being sure of what she saw. A mysterious page-turner you won’t be able to able to put down, The Woman in the Window is a standout in 2018’s literary library.

Of course, no rainy day is complete without a hot – or cold (because it’s still San Antonio and still in the 80s) – cup of coffee. We don’t know about you, but personally we’d rather stay in than make a mad dash through the rain for some $5 Starbucks. So, to satisfy those pumpkin spice latte cravings, we found a delicious, healthy alternative to the sugar-laden sipper from Amanda at the Running with Spoons Blog. Let us know how this pumpkin spice coffee creamer works for you, and feel free to spice it up to match your own taste!

Put the dates in a blender and process on high until they’re a smooth paste. Add the coconut milk, pumpkin puree, spices, salt and vanilla extract, and continue to process until everything is smooth and creamy. Refrigerate until you’re ready to add it to your coffee, and make sure to give it a good shake before you pour it in!