Not Your Grandmother’s House 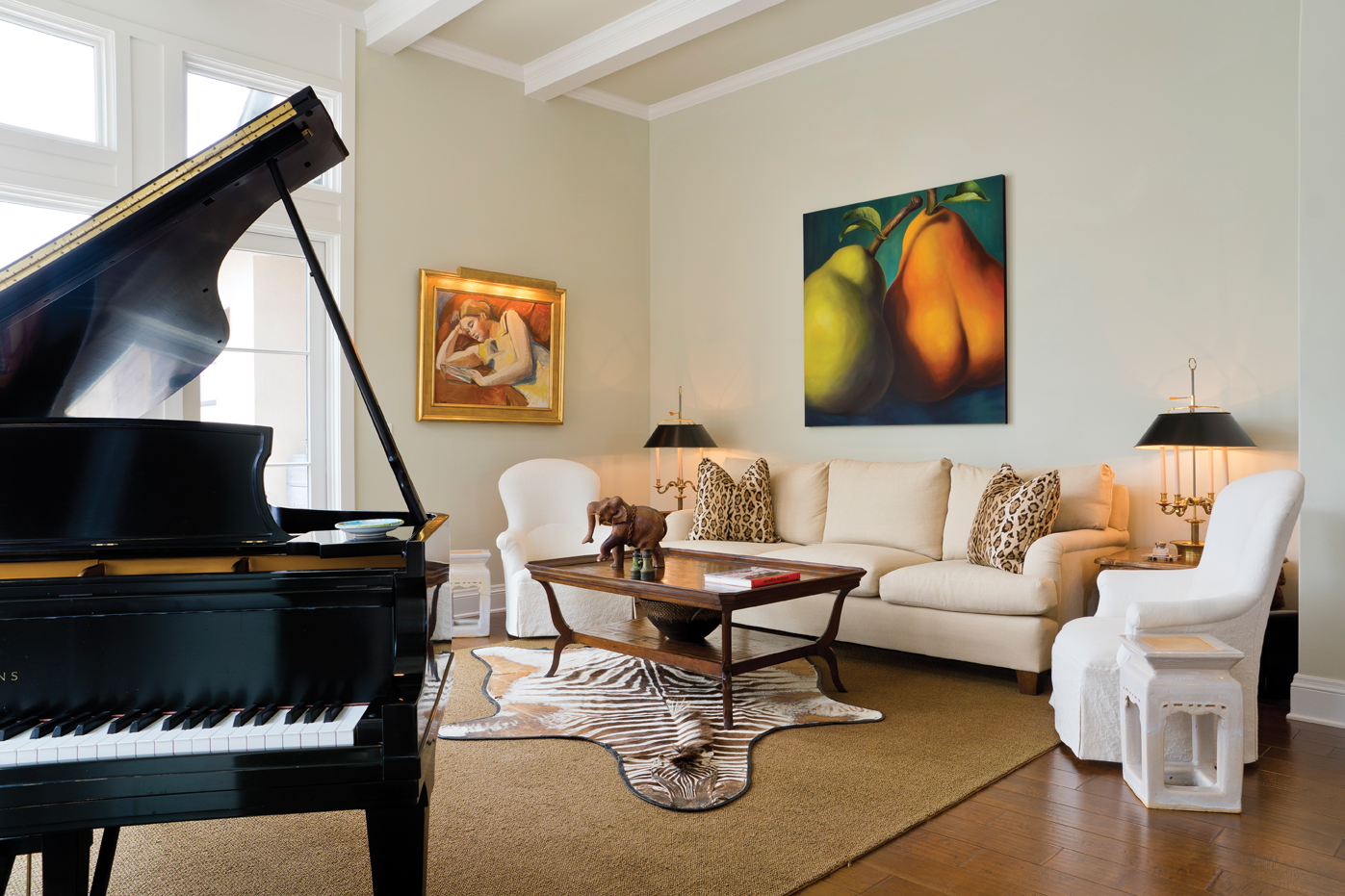 Cheryl Ladd and her husband, Brian Russell, are no strangers to elegant homes. The two have enjoyed lives in the entertainment industry, traveling the world for their stage and screen careers. They could have settled anywhere for the third act of their lives, but they chose the hills outside of San Antonio for their home and their business, Cheryl Ladd Signature Homes.

The pair have shared a love for home buying, remodeling and building throughout their 37-year marriage. While dating, they visited open houses, sharing their concepts for construction and design. Russell’s forte is space – he likes the concept of shaping space to achieve maximum use of natural light. He draws rooms and elevations freehand first, shifting perspectives with pen and paper.

Ladd is the detail person. “This girl is fabulous with color,” Russell said. “She has an excellent color palette. She knows how to use color to bring the outside in and make a home comfortable and elegant.” 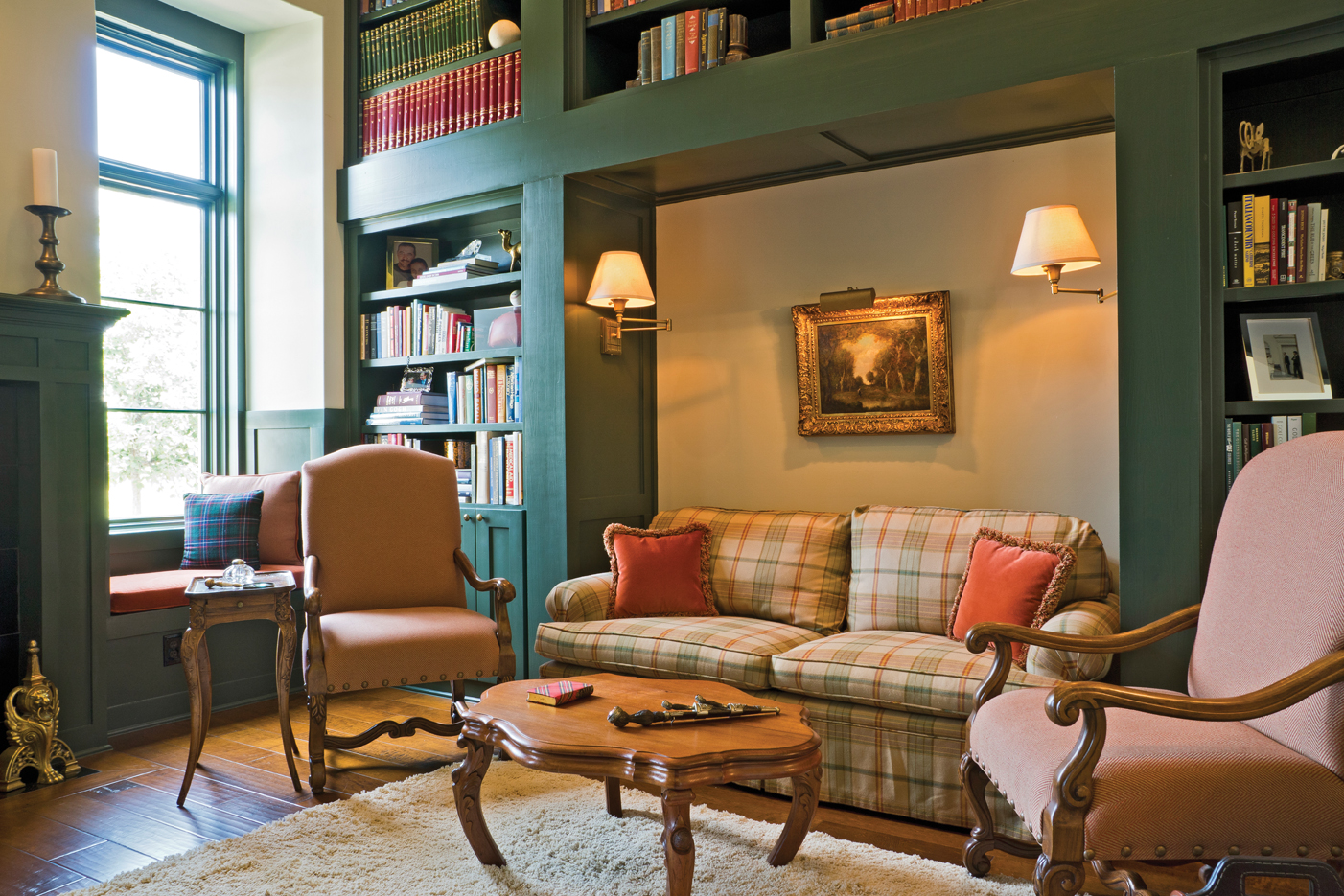 “I like homes that are serene,” Ladd said. “Brian and I have what we call a collected life philosophy. We like comfortable and timeless design, nothing fussy. Simple and uncluttered suits us. Our home is definitely not your grandmother’s house.”

Their home is a testament to their philosophy. In 5,800 square feet, they have established spaces that flow from one to the next, diverging and rejoining like streams after a rainfall. Glass walls, carefully placed windows and skylights let natural light and shadow accent details in the rooms.

“Building a house is like making a movie,” Russell said. As a movie producer, he should know. “You start with a great script, get a great location, hire the best people and let them do the work while you watch the budget. That’s what we did when we built this house.” Russell said he and Ladd believe money should be spent where it counts. “Structural integrity is first for us,” he said. “It may cost a little more to use top-quality materials, but it pays off in the end product.”

They also think a home’s placement on a lot is crucial for the flow of the house.

“We placed this home with the backyard and pool facing south so we can see the sunlight pattern change in these rooms throughout the day,” Ladd said. “We get a breeze through here that makes the room so pleasant.”

The main room in the house is a combination of the living area, sunroom and kitchen. The ceiling height soars to 16 feet, which might diminish furniture in other homes. However, Ladd arranged the sofas and chairs with careful consideration for the ceiling height and palette. The Steinway grand piano in the sunny corner provides an anchor for the room and a cheerful place for Russell to release his musical creativity. 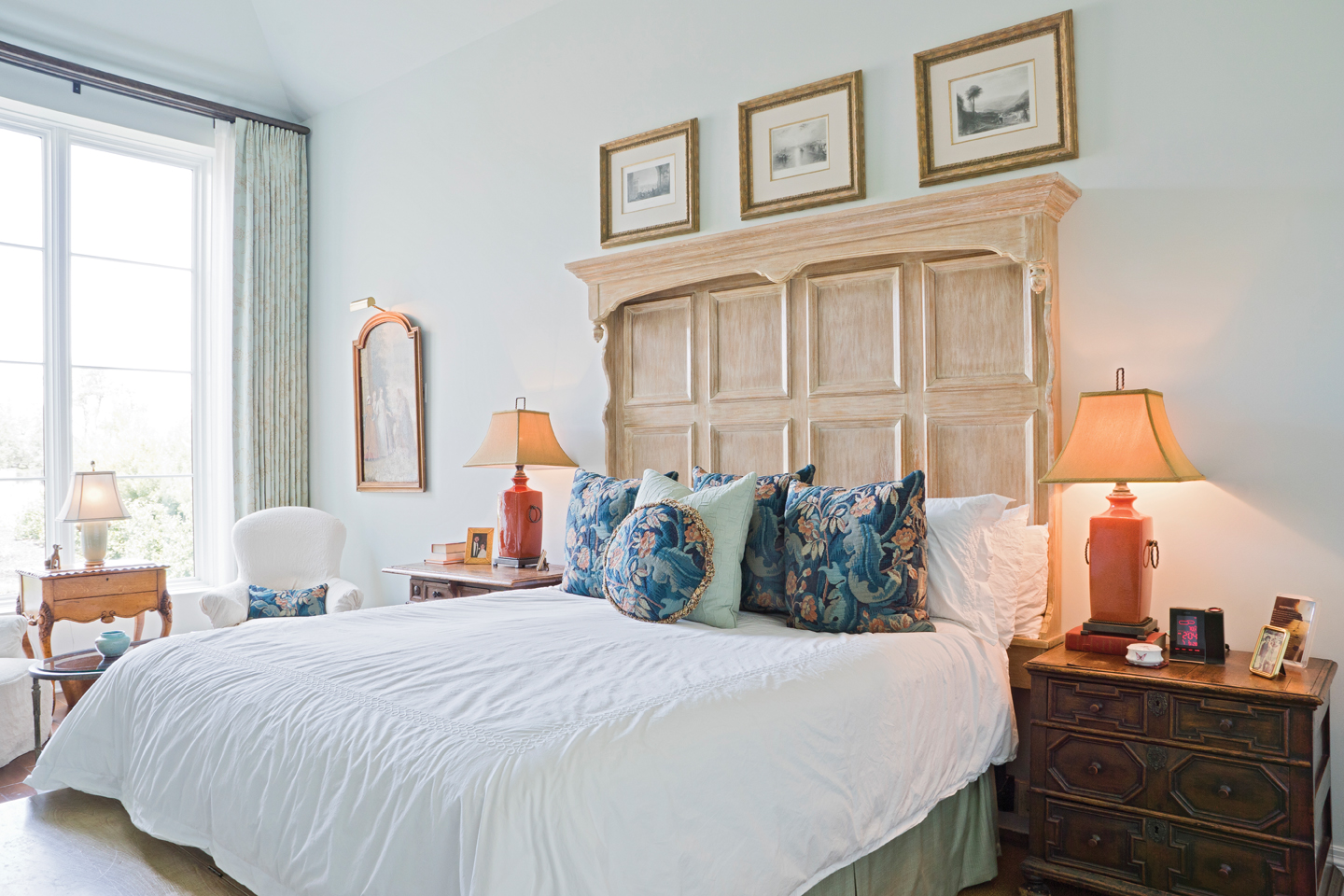 Ladd noted that because the ceiling is so high, the room needed a large fireplace to anchor it. “Texas has beautiful limestone, and we used it to frame the fireplace,” she said. “You’ll note that the top of the mantle is about five feet high.”

One of the couple’s art treasures sits on the coffee table near the French doors. “It’s an intricately carved Indian elephant in harness,” Ladd explained. “It was a gift from a dear friend who has a home in India. We had told her we were on the lookout for a fabulous elephant. She found this one and carried it all the way from Hyderabad. The intricate carving fascinates me.”

“Most of the furniture in the living area we’ve had for more than 30 years,” Russell said. “We’ve recovered it occasionally, but the pieces were well-made to withstand years of wear.”

Ladd said the two like quality furniture that is also super comfortable. “We want people to walk in the front door and feel welcome and happy,” Russell added. “The house is designed on straight lines, so it has a contemporary feel. We call it contemporary French country.” 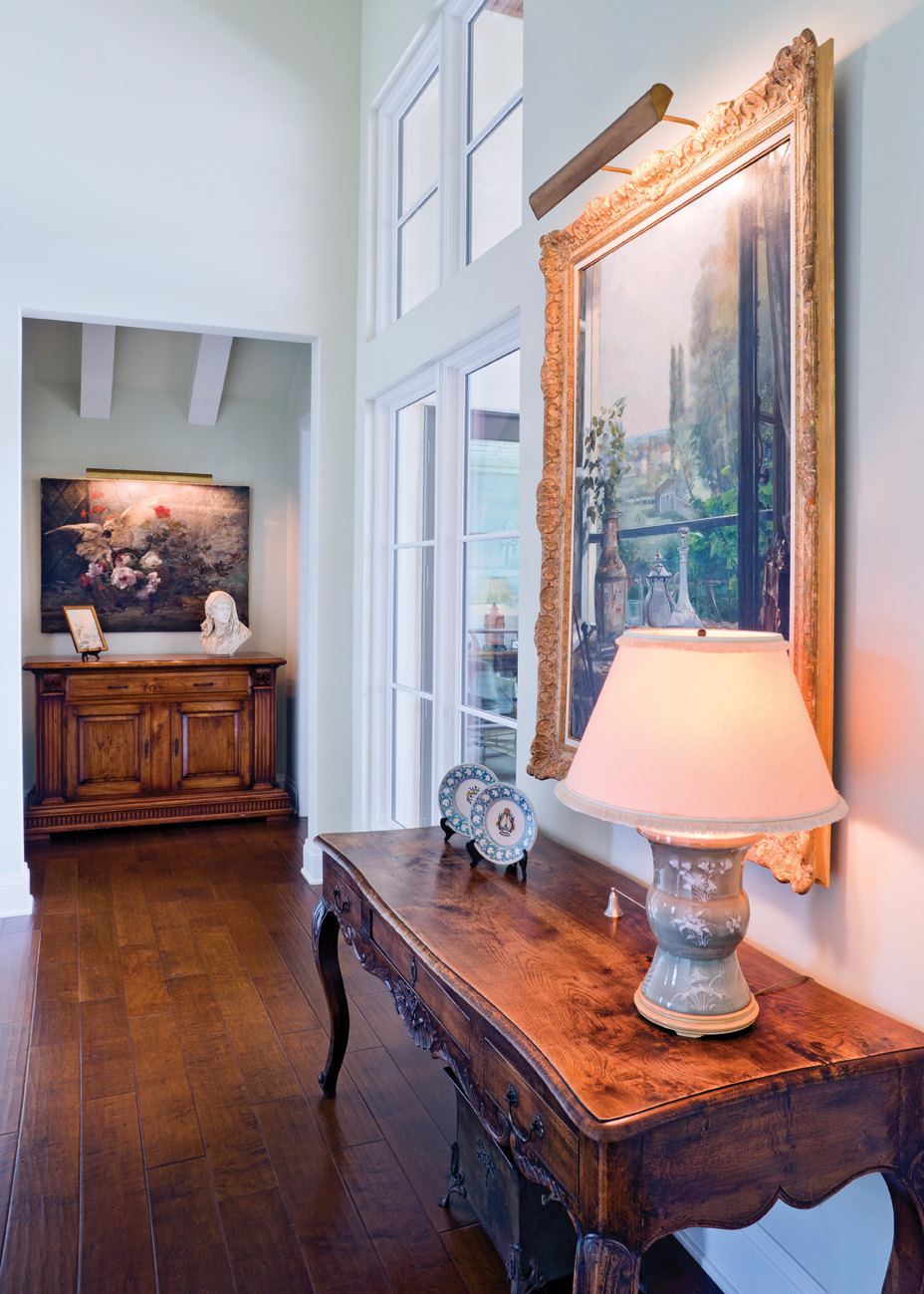 Spectacular Kitchen
The couple agrees the kitchen is the most spectacular room in the house. The ceiling rises to 18 feet at its apex and natural light filters through dormer windows, a signature element in the company’s homes. Bucket-shaped chrome light fixtures seem to float over the moss green marble-topped island. Seating for four is tucked beneath the ledge, across from the gas range. A bronze statue of a bull was created by sculptor Pat Roberts, whose husband Monte Roberts is known as the “man who listens to horses.”

The white custom cabinetry is abundant, so there is plenty of storage. The white porcelain farm sink is opposite the range and, next to the twin dishwashers, provides step-saving cleanup. Double ovens offer caterers ample warming space for appetizers and entrees when the couple entertains.

At the far end of the kitchen is a corner breakfast nook. Over the table hangs a primitive painting of a cow by internationally-recognized artist/illustrator Ezra Tucker. Ladd and Russell commissioned the painting after working with Ezra on their children’s book, “The Adventures of Little Nellie Windship.” 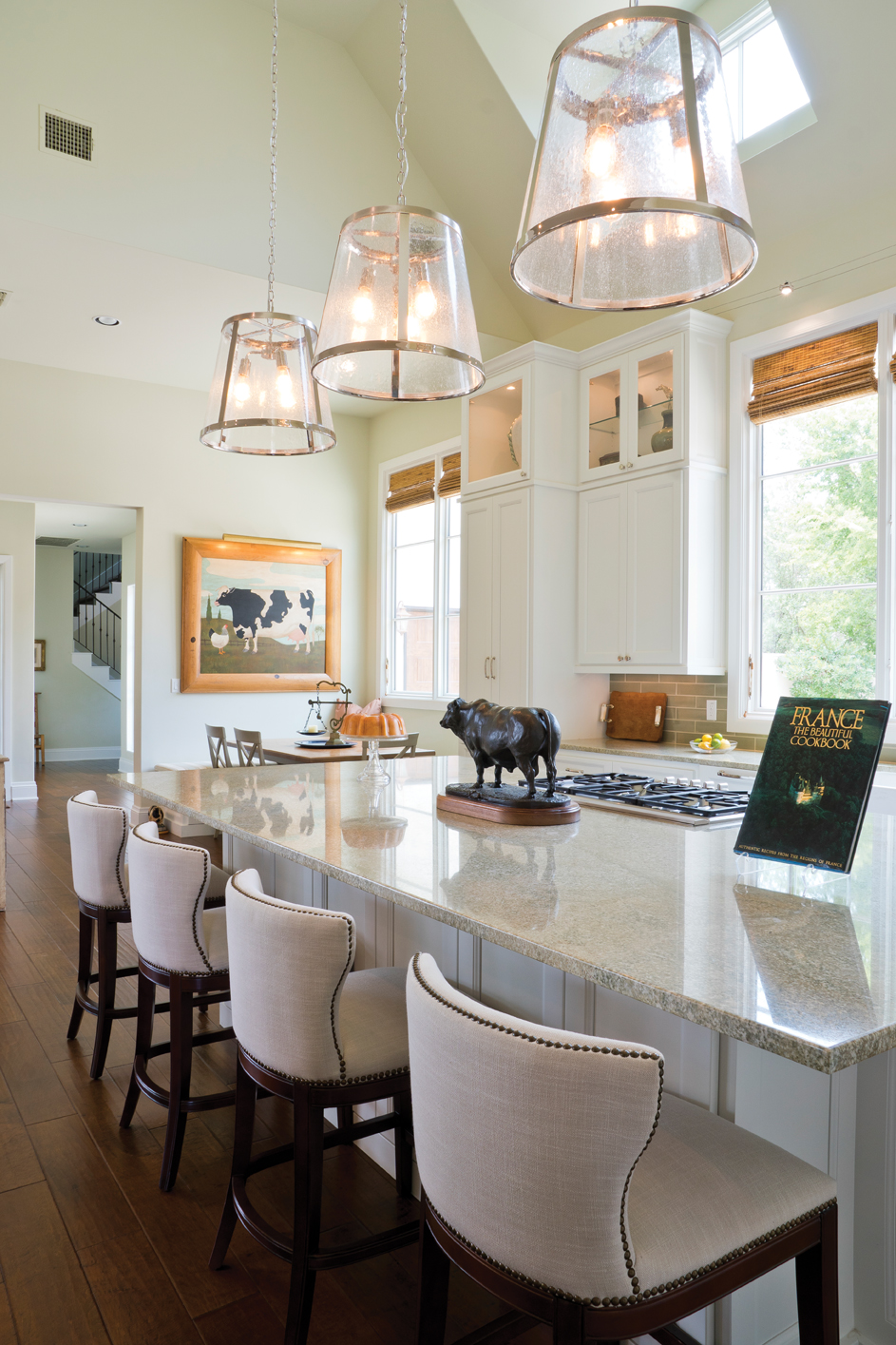 “Ezra is the number one wildlife artist in America,” Russell said. “He was a little surprised when we asked for a primitive of a cow, but he painted it. We love the piece, and it moves from house to house with us.”

A doorway by the breakfast nook opens onto a vestibule, providing access to the backyard and separate garage. An antique woven coat rack, a special find from a store in Comfort, holds purses, coats, leashes and other items Russell and Ladd may need as they head out the door.

The back stairs are located near this space. One of Ladd’s favorite pieces of art hangs here. The picture is an enlargement of a crossword puzzle from the LA Times that has Ladd’s name in it. It was a birthday gift for her.

The dining room is out of sight of the kitchen, so dinner guests won’t see the preparations behind the wall. The 17-foot ceiling towers over the custom-made round table perched on a massive urn base. An antique tapestry hangs adjacent to an 18th century armoire that was once a gun case. Now, it holds the family crystal and china.

The Scottish room is along a hallway that leads to the master suite. This room pays homage to Russell’s Scottish roots, and it is here the couple holes up on bad weather days to light a fire and read. Brian’s antique desk is here, where he works on his novels. A plaid sofa across the floor is framed by custom shelves storing books of all kinds, as well as family photos and mementos of two careers built in the entertainment industry. There’s a George Shultz cartoon, a photo of Ladd with John Wayne, and her TV Land awards. Also displayed are a horse sculpture by Pat Roberts and one of Muhammad Ali’s boxing gloves. 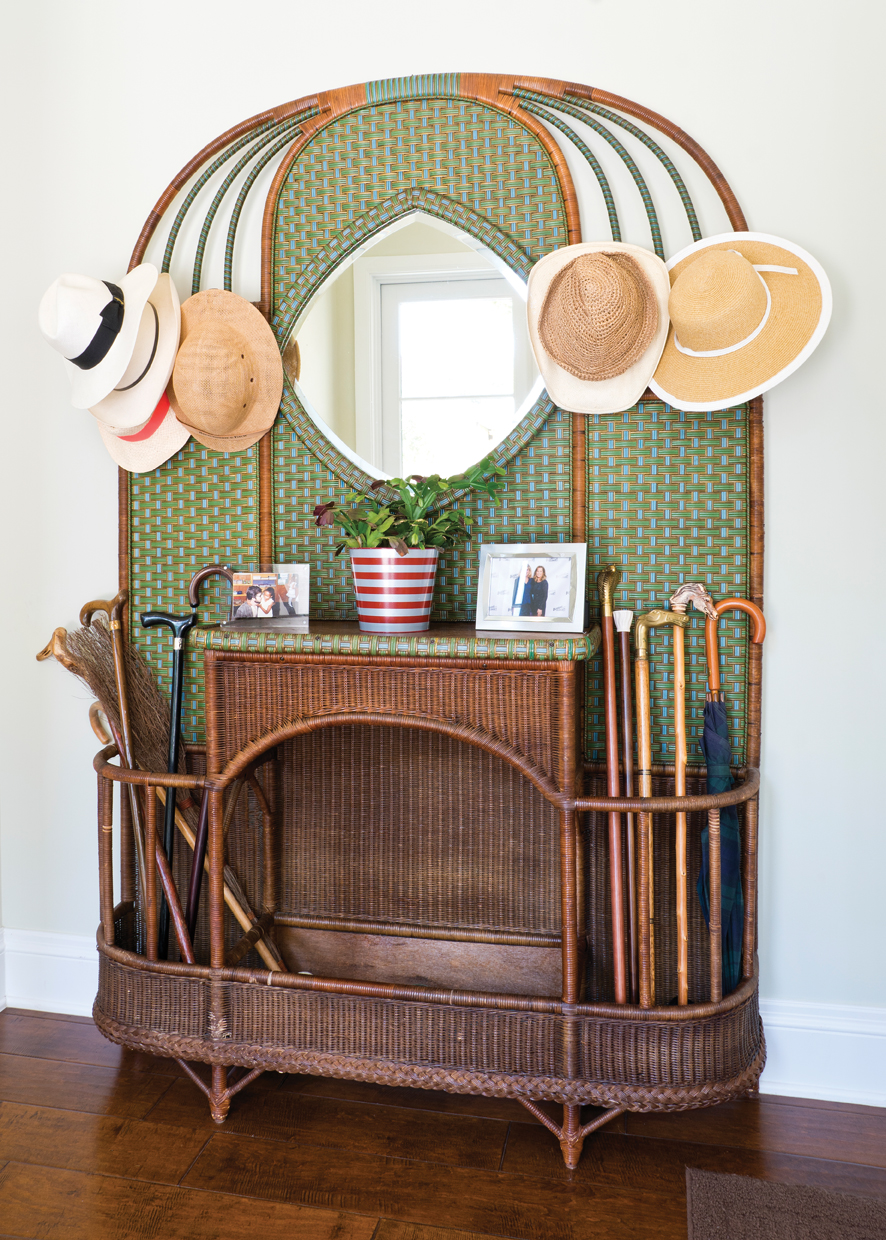 At the end of the hall, two favorite works of art are displayed. One is a colorful painting of birds, artist unknown. The other is a bust of a shepherd boy, the first piece of art Ladd and Russell bought together.

“I love this because of the detail in the sculpture,” Ladd said. “His expression, the way his shoulders turn – it is so lifelike.”

The master suite is a study in serenity. One wall is a window overlooking the xeriscape garden. The adjacent king-sized bed is 40 years old. The English country headboard came from Russell’s first marriage and the footboard came from Ladd’s. She refinished the two to match. Antiques flank the bed; one is a three-drawer antique French chest on his side, and an antique table sits on hers.

Across the room is a wall of shelving built to display a collection of baskets and pottery, as well as a big-screen television.

The master bath sparkles in white. The soaking tub sits beneath a beach painting. Across the room, the walk-in shower has three clerestory windows for bird watching while washing. The shower walls are marble, as is the entire bathroom floor. Spacious his-and-hers closets and separate sinks provide plenty of room to prepare for busy days. An oversized wrought iron chandelier offers a dark counterpoint to the white room. 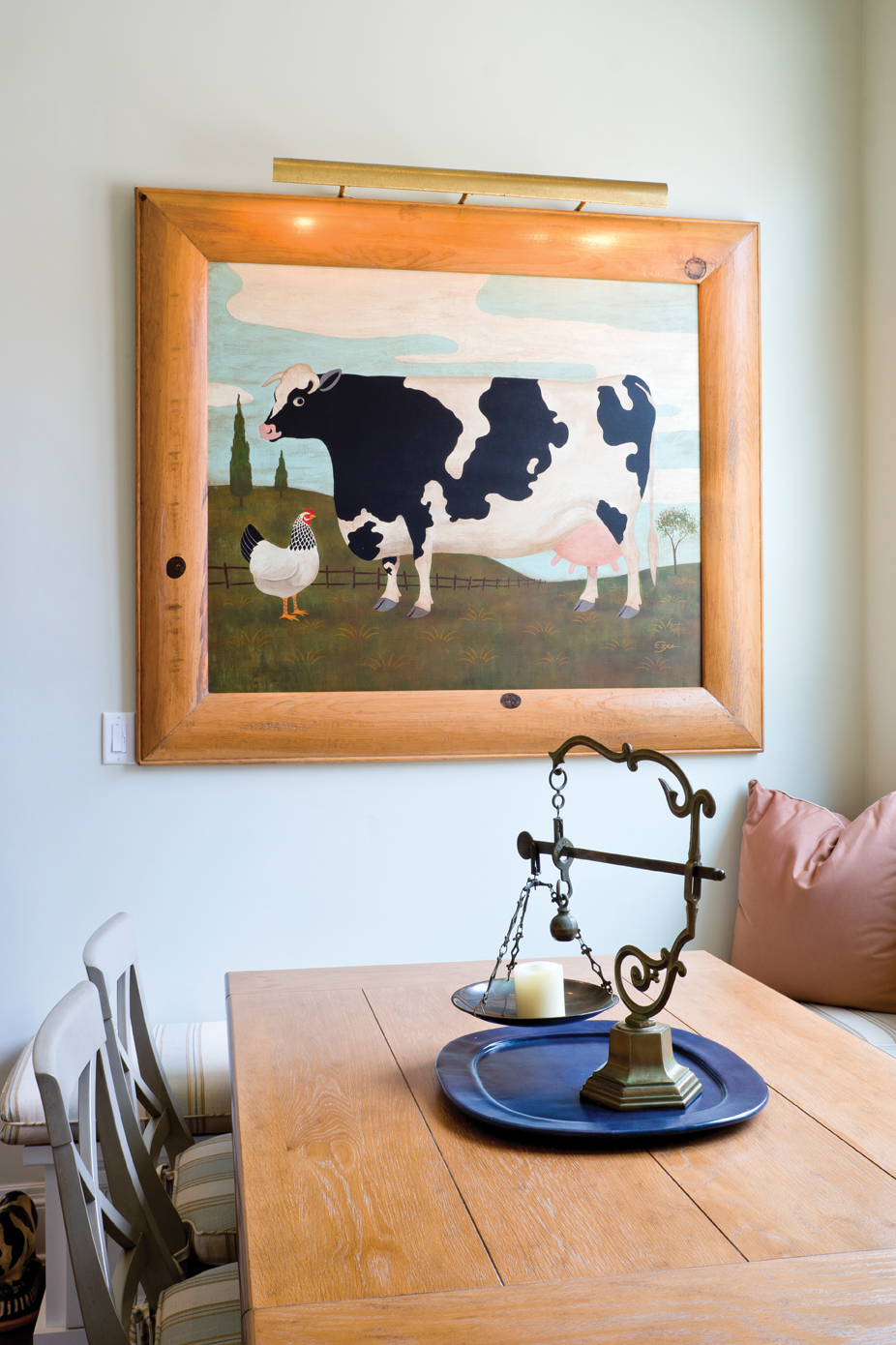 Ladd and Russell believe in outdoor living. Their house surrounds a deep patio with skylights in the ceiling. A large fireplace provides warmth to the sofa and chairs; wrought iron, antique French ice tongs decorate the façade.

Beyond the façade is a large, vanishing-edge swimming pool, a favorite haunt for the family dogs. Cobblestones surround the pool. A smooth lawn rolls toward the back fence, with a view of a bird sanctuary.

“Because this is a bird sanctuary, no one will ever be able to build anything behind us,” Russell explained. “That was an important factor in purchasing this lot.”

“We knew we had a good lot when we bought it,” Ladd added, “but it was so thick with trees that we didn’t realize how good it was until we thinned a few. When we discovered how the view would appear, we moved the house back further from the street to take advantage of the vista.”

The couple had the foresight to build a separate garage. This space houses a ping pong table, a television and exercise equipment. Some of Ladd’s gold records are displayed here, as well as the Broadway poster from Ladd’s run in “Annie Get Your Gun.” There’s a poster for “Charlie’s Angels” and her golf memorabilia. She’s passionate about golf and has played with Arnold Palmer and Jack Nicklaus.

Ladd and Russell have just sold their first Signature home in Cordillera Ranch and have several other lots available. “One of the lots is in the design process right now,” Ladd said, “and we are looking forward to helping two more families make their new home dreams a reality.” 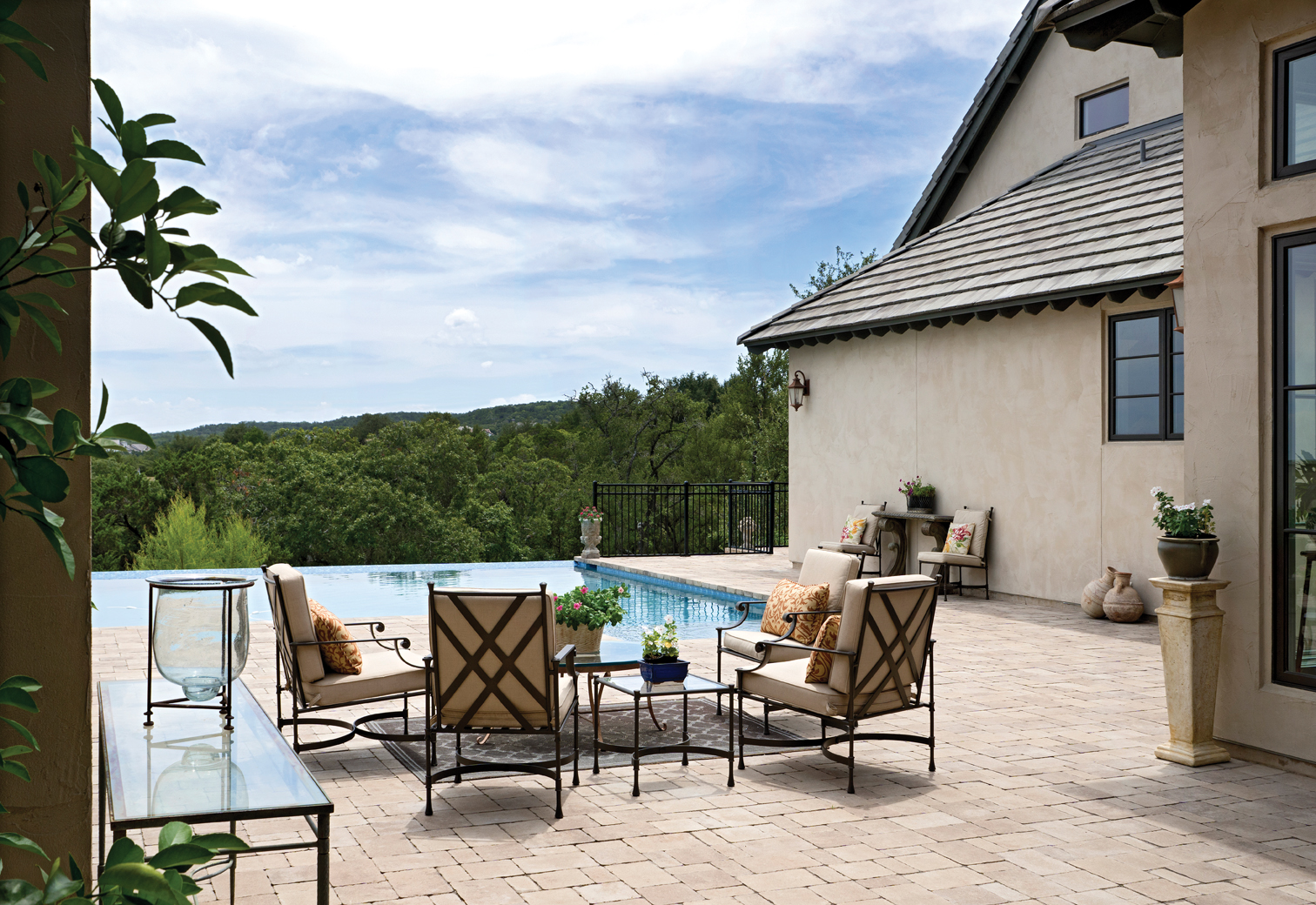