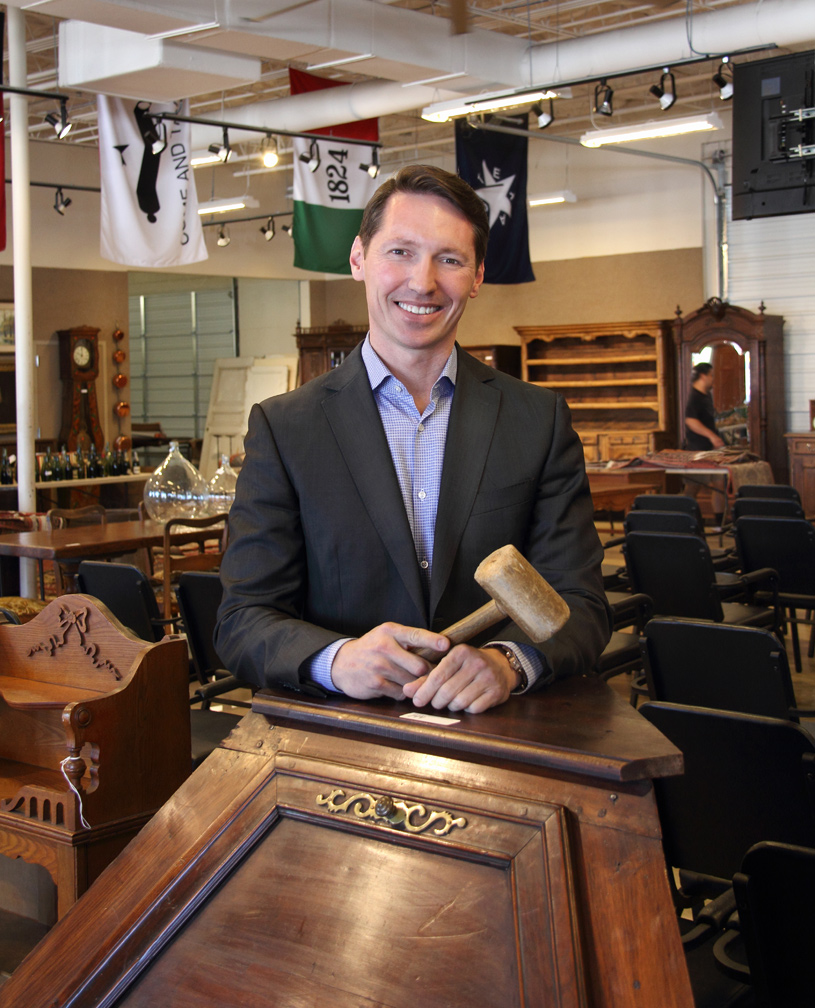 Rob Vogt joined Vogt Auction Galleries in 2005 and is currently the company’s director in charge of operations, branding and online marketing, as well as performing auctions for charitable organizations. After graduating from Pepperdine University with a journalism degree, Vogt pursued a career in both print and TV reporting/editing, including stints at the San Antonio Express-News and two NBC-affiliated stations in Texas. He also spent four years as a senior producer at Yahoo in Silicon Valley.

Founded by his father, Gene Vogt, in 1975, Vogt Auction has sold $130 million worth of merchandise since that time, hosted 200,000 attendees and handled more than 5,000 estates. It now holds 55 live auctions a year in-house and online. The company specializes in American and European furniture, Texas art, historic firearms, estate jewelry, silver, Persian rugs and more.

Were you involved in your father’s business growing up?
The business and I are exactly the same age. I am 43 and so is Vogt Auction. I literally grew up with it. My first job at the auction house was to pick up little pieces of debris out of the carpet. I then graduated to furniture polishing and cleaning the glass with Windex and paper towels. I was working my way up.

Yet, as a young adult, you chose a career in journalism. What brought you back to the family business?
As a journalist, you write stories about people who are building concrete things with their lives. I decided I was going to go to the other side, I was going to build things. It was very important to me to see my family’s legacy continue, because I knew my parents had worked very hard. I had seen over the years the excitement and freedom of the entrepreneurial world, and that appealed to me.

How did you change Vogt Auction?
I opened the digital door. For a legacy business such as ours, it was a big change. We were used to people coming here to attend auctions in person. So it was a big and scary change to become comfortable with people bidding online … People are online now, the front door is online, not on the street anymore. The pace of change is accelerating in our industry, and if we want to grow, we need to keep up with change. There is also a move toward consolidation in the auction market. Most auction houses have gone out of business in the last 10-15 years. Younger people are not showing up.

How are you reaching the younger crowd?
We need to find them where they are (online), and we need to speak to them in their language, in brief and clear ways, and appeal to their sense of individuality and authenticity, which is really a natural fit for antiques. Every piece is different, and every piece has a story. If you buy it, no one else will have the same thing. And we have seen an increase in online participation. Last Saturday, for instance, for our sterling silver auction, we had 128 people here and more than 3,000 bidding online.

So what is in demand these days?
Midcentury modern has been hot for years, the true Scandinavian clean look, very popular. Lately, however, more traditional styles and decorative pieces have been coming back, such as Victorian furniture, Louis XV and Louis XVI French styles, baroque and ornate pieces, church and Gothic pieces. It’s an interesting shift. And silver is very trendy.

Where and how do you find all these treasures?
We mainly rely on a network of pickers in several European countries who find the things at the source and send them to us. That’s combined with objects that come from local San Antonio estates. We work with institutions as well, like bank trust departments, probate lawyers and the like.

According to your website, Vogt Auction handled the estate of Marion Koogler McNay and more recently that of Linda Pace, the founder of Artpace. Tell us about those.
We have worked with every museum in town. In the McNay case, those were extra estate objects that the museum had in its collection and wanted to deaccession. The magic of these auctions is the pairing of a well-known personality with objects that tell the story of their lives. That’s when we are overwhelmed with interest. The Pace auction was extremely well attended, and everything sold really high.

Do you enjoy being the auctioneer?
Yes, it’s a lot of fun. It’s taken me a long time to become good at it. There’s a lot going on in those moments that you, as the auctioneer, have to consider to do a good job. But everyone is there to have a good time, so even if you tell a bad joke, people laugh. Gene, my father, is extremely funny. Everyone knows him, and he continues to be our lead auctioneer.

Why do auctioneers speak in that almost incomprehensible, fast, rhythmic way we have all seen in movies?
(Laughs) It’s called “the chant.” Basically, it’s trying to create a sense of urgency and sort of put the audience in a hypnotic state. There are also filler words, the gobbledygook that comes between the numbers. Those are actual words but spoken really fast, so they sound like nonsense. We don’t do that here, but that’s what auctions are famous for.

Anything special happening in the May-June period?
We are doing a Summer Luxury Estates Auction in June, which is very exciting. It’s a new category for us that includes designer couture, handbags, fine jewelry and high-end designer glassware such as Baccarat and Tiffany.

Do San Antonians bring you heirlooms to evaluate?
Yes, everyone has an old thing in their house that they are curious about. We have five appraisers on staff. Occasionally something valuable shows up. Recently, someone brought us a painting that was hanging in the family’s grandmother’s house for decades. It was very dirty, and they didn’t know who the artist was. It turned out to be an original by Robert Wood, and we estimated the value at $30,000. They were shocked!

Tell us about some really unusual items that you auctioned off.
Well, this is kind of morbid, but a couple of years ago we sold a hangman’s noose from the Colorado State Penitentiary that was reportedly used to hang six men. We also found an old Rolls-Royce from 1961 in a barn in Boerne. It had been covered up for decades, and the family had forgotten about it… We sold it for $22,000. In 2013 we auctioned off the chair that President Kennedy sat on when he visited Brooks AFB the day before his assassination.

I heard that you came into the possession of a diary written by Blanche Barrow, who was part of the
Bonnie and Clyde gang.
Ah, yes! The producers of Pawn Stars, the show on the History Channel, called us to see if we had anything interesting to pitch to the pawn shop (featured on the show). I knew of this diary by Blanche Barrow, which was found by Blanche’s friend who lived in Kerrville. A friend of mine in Fredericksburg had acquired the diary, and he let me take it on Pawn Stars. The show aired in November 2017, and millions of people saw it. However, I refused to sell the manuscript for the price they offered to pay, and I ended up selling it here at Vogt Auction for twice that amount ($4,800).