The Camera Reads Your Mind 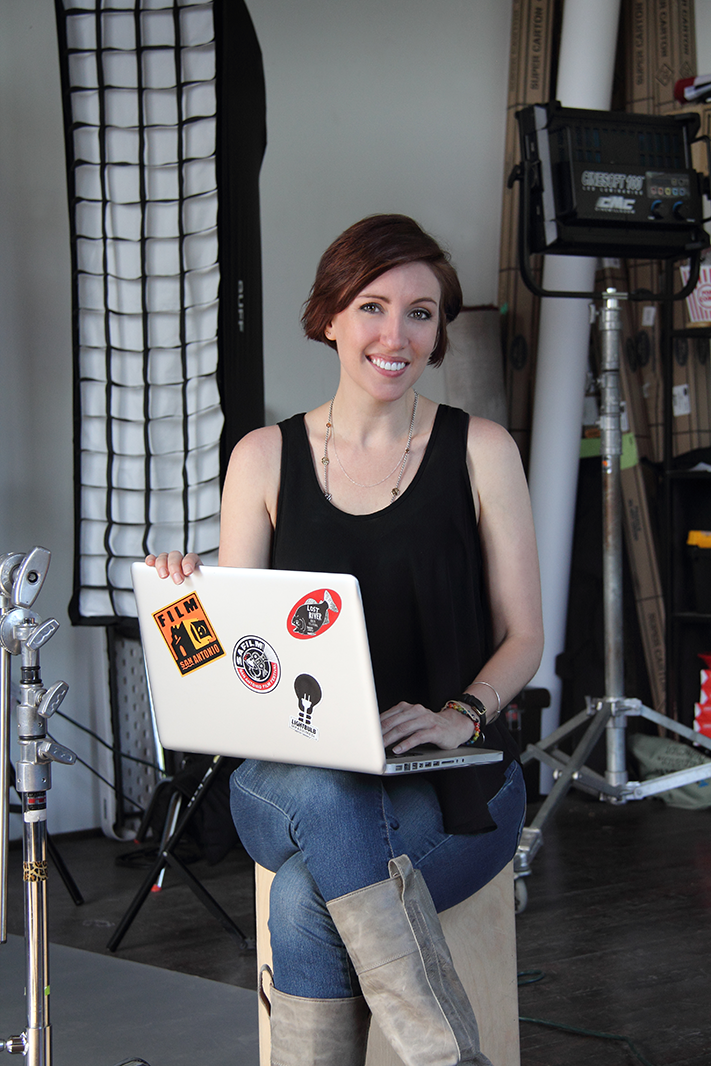 Though auditions are supposed to start at 6 p.m. a few actors arrive early, check in, then wait in the hall. Inside High Key Studio on the West Side, director Natasha Straley has set up a camera and a couple of screens in preparation. Copies of the script sit nearby on a low table. When the time comes, the hopefuls walk in one by one, stand in front of the camera, state their names, and after only the briefest of pauses, get into their scenes with amazing ease.

The short film the actors are hoping to be in deals with “two people trying to escape the life they have created for themselves,” explains the director. They help each other to find the courage to make the necessary changes.

The actors are pros who have no problem following the director’s instructions as she makes suggestions regarding tone and mood of the various scenes. “No smiles or eye contact in this scene. It’s supposed to be tense,” she says to one of them. “Good, let’s try again and take all the risks you need to take,” she advises another. She thanks and compliments them all as they leave the room. Having been an actress herself, she knows how hard auditions can be.

Though she will eventually abandon this particular project, auditions and casting are a big part of her job as director, probably the most important part, as actors must bring the characters to life and make the audience believe them. As a filmmaker she’s attracted to scripts that tell “honest, real, raw” stories that respect the viewers while taking them out of their comfort zone. Choosing the cast and crew, as well as assembling all the other necessary elements in order to honor the story, is what she likes most about directing. “It’s all about the story,” she notes. “As the director I can shape it and make it resonate.”

As a San Antonio-based artist, Straley, who has directed 10 short films so far, would like to create films with “one hundred percent San Antonio crew and cast.” “I want to bring more filmmaking to San Antonio to show that we have the talent here,” she says. Yet to kick up her projects’ visibility she is also eager to find “name actors” who grew up here and who may be induced to come back to help elevate their home town’s cinematic profile.

Narrative shorts are typically screened at film festivals around the country – including the San Antonio Film Festival, scheduled for Aug. 1-5 this year – and are later posted online. Straley’s work can be viewed on her website and/or Vimeo. Some become popular, such as Cauliflower, a little comedic gem she recently directed (written by Phoebe Torres), that brought her a great deal of attention. It deals with a universal tendency to pretend to know something that you don’t know in order to appear more sophisticated or worldly. In this case, three young women pretend to know what cauliflower is as their hostess describes the dinner menu. Cauliflower was the winner of the Reel East Texas Film Festival and the official selection of two other fests – the Portland Comedy Film Festival and the New York City Independent Film Festival.

Needless to say, Straley would like to see a bigger, more active filmmaking community here beyond the production of industrial/utilitarian videos. And she deplores the small number of women filmmakers in San Antonio, compared, for instance, to Austin. That’s something she is determined to change. “I am willing to have coffee with everyone and talk about what they would like to do and what we can do to support each other,” she states emphatically, adding that there are encouraging developments “bubbling under the surface. There’s potential here.”

The Road Led Through New York

Born in Washington, D.C. while her father was in the Navy, young Natasha lived in several different states and in Germany before arriving in Texas with her divorced mother and brother. Texas has been her home since she was six, though the family moved around from city to city looking for a place that would not trigger her brother’s allergic reaction. (Both her mother and brother live in San Antonio now.) Straley attended Texas State University where she earned a BFA in acting and directing while also pursuing film acting opportunities, mostly in Austin. “I did a few plays but the big complaint was that my performance wasn’t big enough for the stage. I prefer to act in a more intimate way,” she observes. “What I like about the camera is that the camera reads your mind, while in the theater the audience is reading your body. I am now teaching acting for film and that’s what I tell students- you don’t have to exaggerate anything. I teach them how to stop acting. Just be natural.”

Soon after graduation, the young woman moved to New York, eager to explore what the Big Apple had to offer. Naturally, directors and producers wanted to see footage of previous work, which she did not have. To get around the problem, Straley wrote a bunch of scenes for herself and had them filmed. “That’s how I learned to produce,” she says with a laugh. During the ten years Straley spent in New York, producing indie films and photography became her bread and butter. Though the environment was very competitive, jobs were plentiful and easy to find. Eventually, she learned to accept only projects that “made (her) heart sing.”

And what better way to accomplish that than by writing her own scripts. The first was titled Finished, a short drama that explores “the moment between holding on and letting go,” which premiered at the 2017 San Antonio Film Festival. She ended up directing it as well because the original director bailed out at the last moment. “I was scared at first but as soon as I stepped on the set, it was like – ‘This is what I was supposed to be doing!’” she recalls. “That’s the moment I realized I wanted to direct and I’ve been directing ever since.” Other shorts she both wrote and directed include Switch in which “a boy confronts his mother with her own tactics,” and Sandra, a story of a mother who tries to bring joy to her children during the holidays.

It was the shooting of Switch that brought her back to San Antonio a little over a year ago and ultimately “inspired” her to relocate here for good last fall. Alamo City life suits her. There’s a little more time for fun things, like going dancing or hiking. And the environment is more conducive to taking on longer projects. Straley is currently writing her first full-length feature, Sidestep, a narrative exploration of the conservative-meets-liberal theme and how the two protagonists learn “to bridge that gap.” Most of the action will happen on the dance floor. “I am toying with the idea of making it more experimental, maybe have the characters communicate largely without words,” muses Straley, clearly excited about the possibilities. She has applied for a grant from the San Antonio Film Commission and will have to raise funds from other donors and investors before starting filming in June. “There’s no money in short films; you have to do features,” she notes. The hope is that Sidestep will be her first entry into the big game.

So, is her goal to get to Hollywood some day?

She considers for a moment before replying: “I would like to be in and out of L.A. But I want to be based here. I like San Antonio.”