The King William Historic District in downtown San Antonio dates back to the mid-19th century. Homes in this area range from classic Victorian to Greek Revival and Italianate design. Small cottages sit alongside mansions, and pedestrians and cars vie for space on the narrow old streets.

Mickey and Cyndee Conrad reside in King William. Former residents of Alamo Heights, they’d done the big house/raise the kids/commute to work gig. They were wondering about a different lifestyle for their later years. A trip to Europe confirmed for them that there was a better way to live.

“We visited all these places where people walk to work every day,” Mickey says. “They live, work and play in the same area. After work, they walk to the grocery. On the weekends, they eat in small restaurants nearby. Everything is within walking distance.” 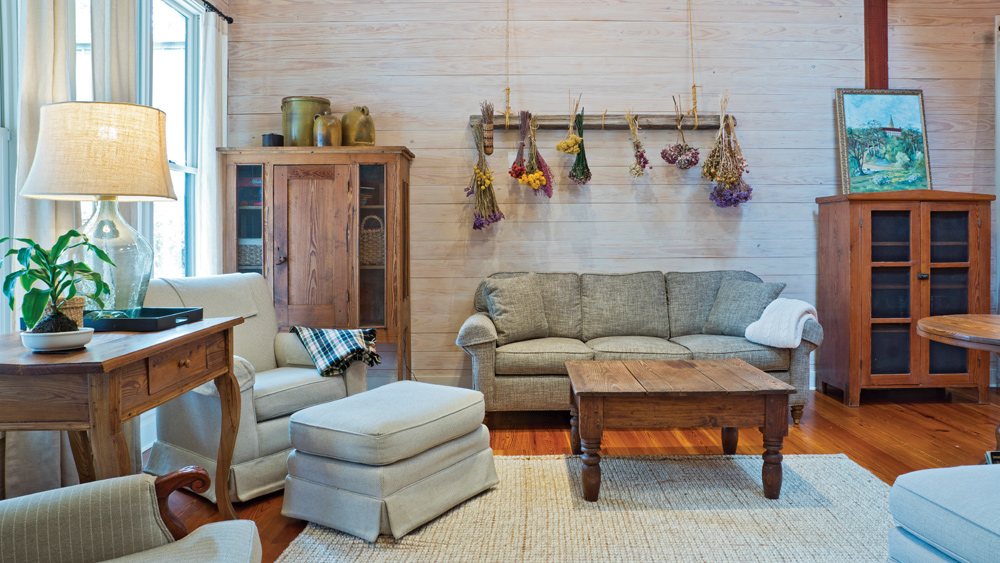 “We came home and started thinking about living in King William,” Cyndee says. “ Mickey is an architect with LPA Inc., and his office is here. I work part-time at Gathering Midtown Church on Ashbey. King William made sense to us, so our Realtor started looking here for us.”

“This was a vacant lot when we found it,” Mickey says. “Thirty years ago, it was one of three houses in a row that burned down. The adjacent homes were rebuilt, but this lot stayed empty. It wasn’t for sale, but our Realtor called the owner to make an offer and it was accepted.”

At 50 by 160 feet, the lot is deep and narrow. Mickey says it’s a common lot size for the neighborhood but presents challenges in house design. “We lost 10 feet of construction space because King William mandates garages must be in the back of the home. Therefore, the driveway up the side of the house consumes space that otherwise might have been used inside the house. 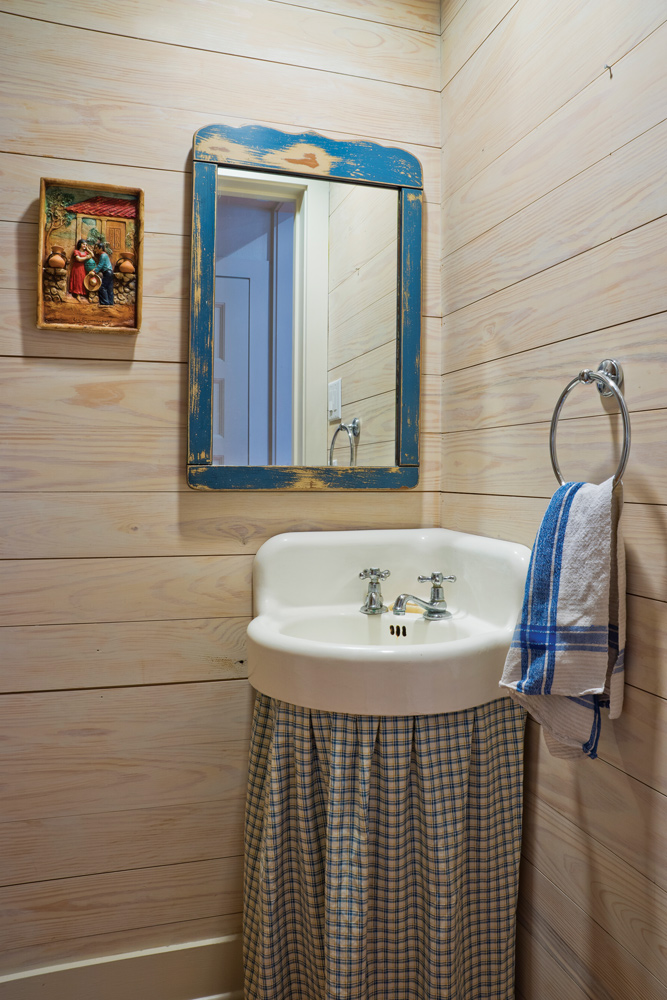 “We wanted to build something that was a contemporary response to the Victorian homes nearby,” he says. “We collect early Texas antiques, and we wanted an appropriate setting for them. At the same time, we wanted low maintenance, high energy efficiency and a ‘green’ approach to building materials.”

“We call it our urban farmhouse,” Cyndee chuckles.

“Mickey is into being ‘green,’” she adds. “This house is certified as LEED Gold, which means it has achieved the second-highest rating granted by the U.S. Green Building Council for homes using sustainable construction techniques. The City of San Antonio also gave him a Green Building Award in 2013.”

The materials list includes a foundation set on recycled concrete; insulation with a continuous thermal barrier; high-efficiency windows and A/C units; skylights for natural light; and high-efficiency appliances. Water-conserving toilets, faucets and showerheads were installed. Longleaf pine plank flooring, reclaimed from an old Alabama rice factory, is used throughout the home. A large cistern in the back yard collects rain runoff from the main house and the guest house out back. The runoff is used to water the xeriscape garden. 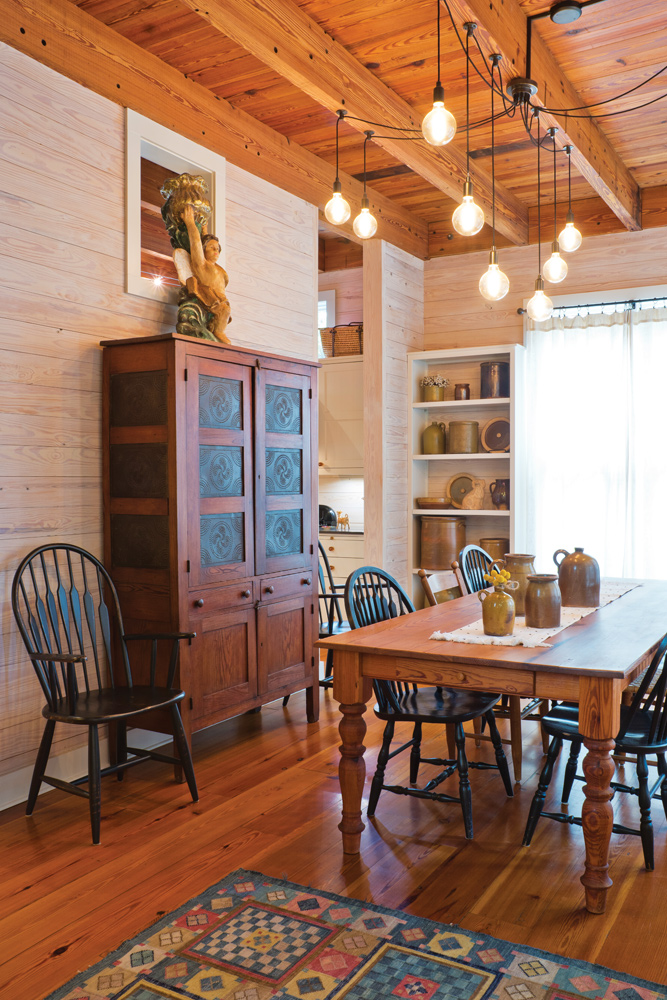 But before the awards and the construction came the design and choice of Stephen Jackson as the builder. “This floor plan is conceptual plan number seven,” says Mickey. “I wanted an open floor plan with easy flow from room to room.”

“I like walls, I didn’t want it wide open, so we compromised.”

Quick Sale, Fast Move
Construction began at the rear of the lot on the guest house. Looking back, Mickey says that was fortunate, because soon after they put their Alamo Heights home on the market, it sold. “Three days after we listed it, we sold it,” he recalls. “We had to be out right away. We put most of our belongings in storage and moved into the guest house just as it was finished.”

“And the funny thing was, we never missed all the stuff in storage!” Cyndee exclaims. 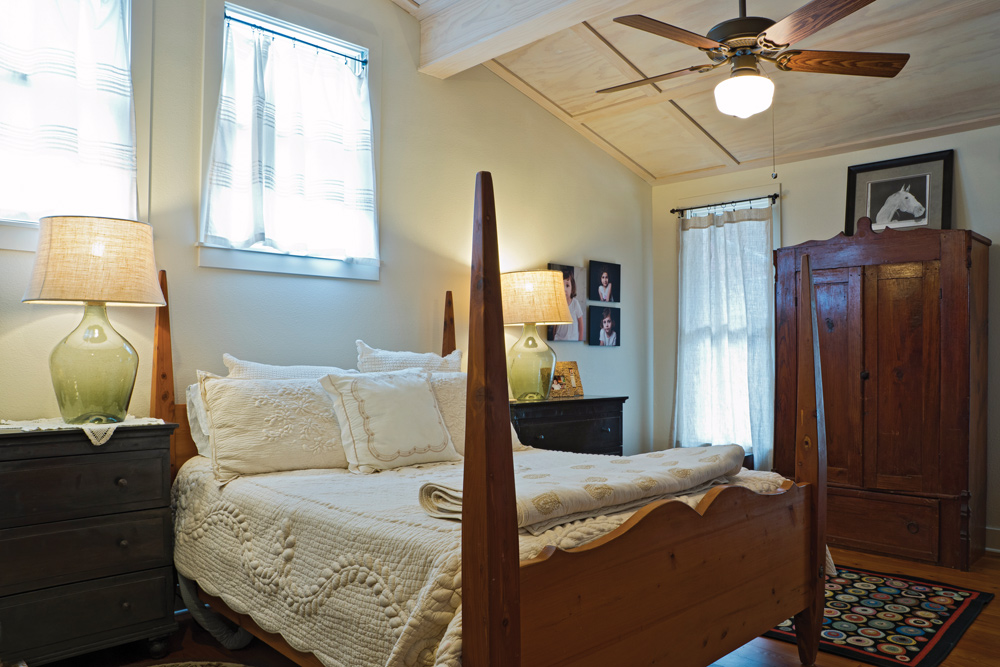 Shotgun Layout
The home is a traditional Texas shotgun design, with rooms arranged one behind the other and doors at either end.

Meyer pottery is unique because of the Atascosa County clay used to make it. This rare clay gives the stoneware color variations ranging from brown to mustard yellow to yellow/green. The signature of a Meyer pot lies in the handle, which always has a thumbprint on it. This stoneware is highly sought after by collectors and is increasingly difficult to find. 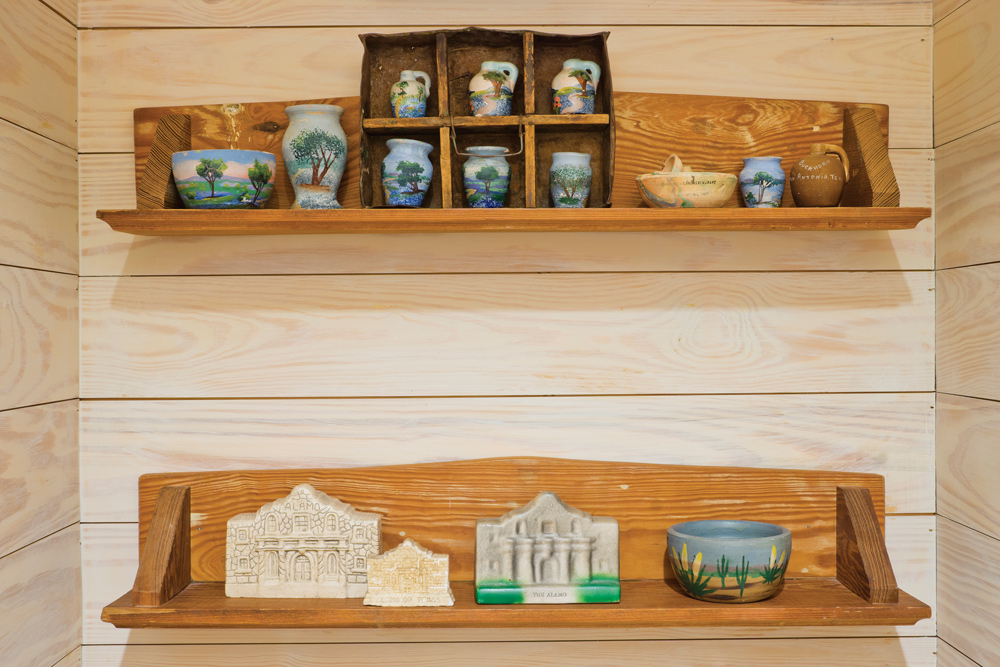 The Conrads’ collection ranges from small bowls to chicken feeders and large pots. The pride of the collection consists of inches-high pots on a shelf in the foyer and powder room.

“These items were made for San Antonio gift shops,” Mickey says. “San Antonio scenes were hand-painted on them and sold to tourists.” Like their larger brethren, these miniatures are hard to come by.

Adjacent to the dining room and staircase is a small sitting room. Furnished with a chair and small sofa, it houses a smaller pie safe that once held the couple’s television. “We don’t spend much time in here,” Mickey says. “Mostly it’s for overflow when we have parties.” 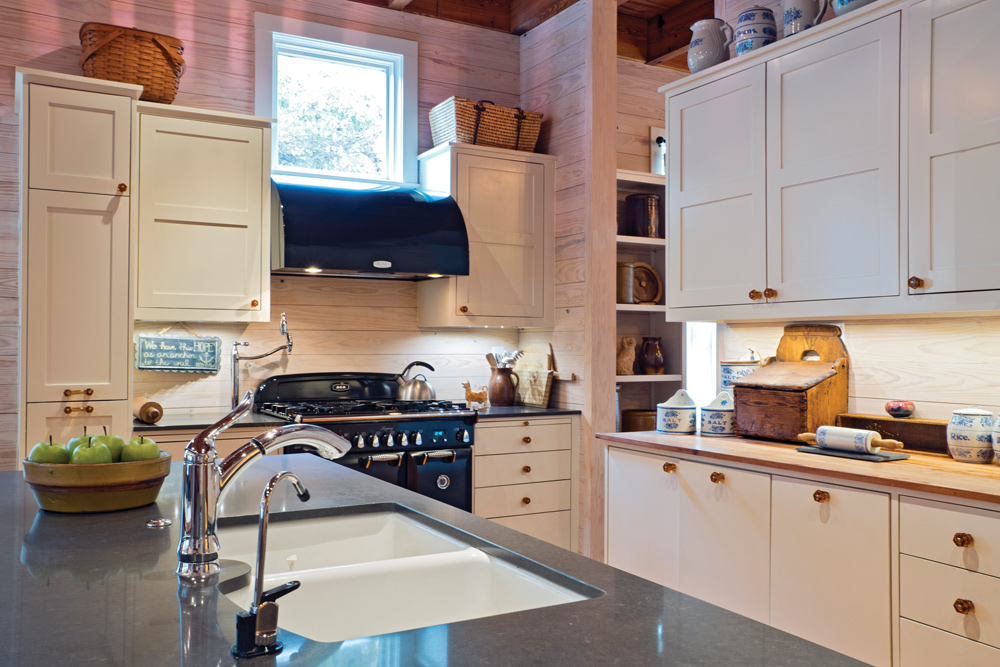 The kitchen and living area are where the couple spend most of their time. The shiplap walls are new lumber, whitewashed with a combination of mineral spirits and cream-colored paint used for the kitchen cabinets. The wooden beams and ceiling over the kitchen are actually the subfloor for the second story.

The kitchen is simple, with an island surfaced in Caesarstone. All the appliances are placed behind cabinet doors or in sliding drawers so the kitchen always looks presentable and wasted counter space is diminished. The gas stove and range hood are from Aga, a British manufacturer, and were sourced from Homewerks.

“You can see that we’re able to cook and clean using minimum effort,” Cyndee says. “The kitchen table is on the other side of the island, so it’s just a few steps to serve a meal. When we have a party, it’s easy for guests to gather round while we prepare food or clean up.”

Against the wall and adjacent to the kitchen table sits a bench. At least it looks like a bench, but it’s actually a Mennonite trundle bed. “We had a foldable mattress made that fit right into the bed,” Mickey says. “When our daughters were little, this is where they slept when the grandparents came to stay for a visit. They loved sleeping here.” 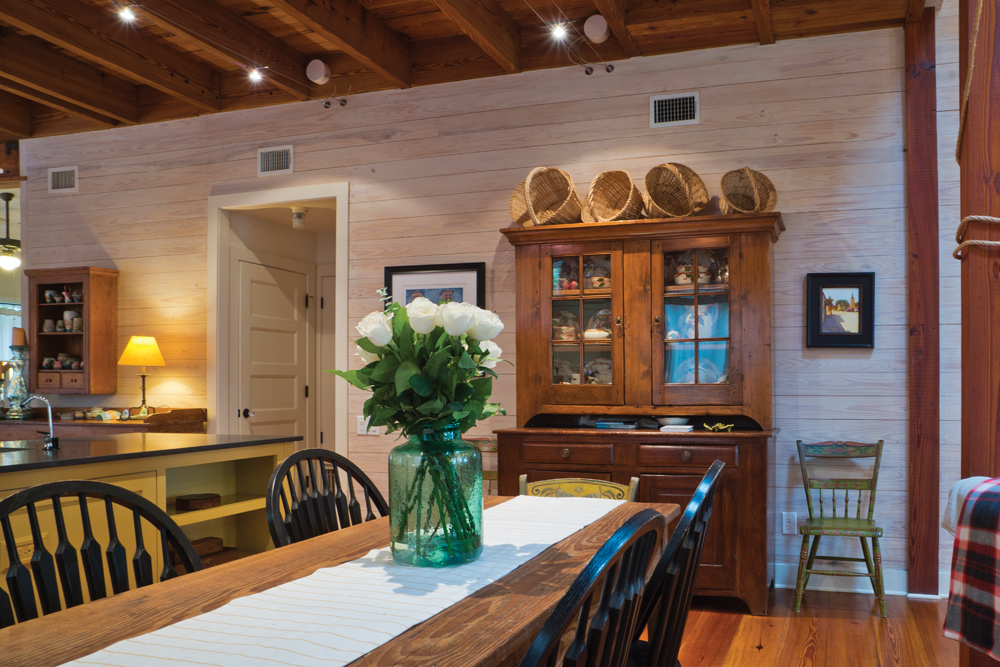 Across the room is a primitive Texas buffet with a legend attached. “We bought this at the Burley Auction Gallery in New Braunfels,” Mickey says. “We were told it belonged to Ima Hogg, daughter of James Hogg, who was an early governor of Texas.”

“But we can’t prove that,” Cyndee points out.

The buffet holds a set of Franciscan ware in the apple pattern that belonged to Mickey’s great-aunt. “We don’t use it often because it is reputed to have a lot of lead in it,” Cyndee says.

The living area is a bright clutter-free space with three comfortable swivel chairs and a couch made for relaxing. “Some of the things in here came from Vogt Auction Galleries,” Mickey says. “And the art is from local artists. The painting leaning on the top of the pie safe is by Robert Quill Johnson, a local artist who was my junior high school English teacher. He was just beginning painting when he did that piece. He later became famous for his paintings of quail and roadrunners.”

Across the room is the big-screen television, cleverly hidden behind a mounted folding cabinet Mickey made from leftover flooring.

The master suite receives natural light through several large windows. The high ceiling slopes down toward the back of the house. The queen-size four poster bed came from Horse of a Different Color; the bedside table and antique armoire were sourced from other retailers. At the foot of the bed is a custom-made shelving and dresser unit created from leftover longleaf pine. The cabinet holds a small television, children’s picture book and family photos.

The guest house initially was conceived as a private retreat for the Conrads’ visitors. Over time it has morphed into Cyndee’s studio. “I have an Etsy shop called Half Pint Fauna,” she says. “I design small animal cake toppers for birthdays, showers and a variety of other things.“ 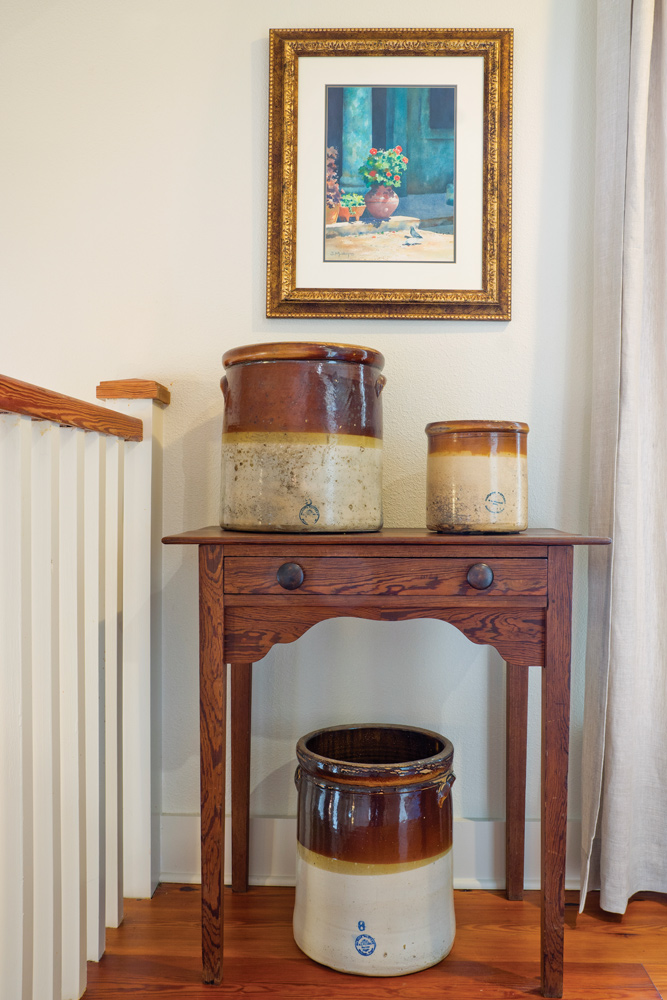 The real story behind the house, according to the Conrads, is the change in lifestyle.

“We walk everywhere,” Cyndee says. “We walk to work, to restaurants, to the new HEB for groceries. For the King William Fair, which happens near here, we are sequestered for 24 hours. No cars on the street. We have a front row seat for the parade, and we provide friends with a front row seat and a party.”

“We see it as a way to serve the vendors who participate in these events,” Mickey says. “We meet new ones every year. We can provide a cold drink and access to a clean bathroom for them. In return, we make new friends.”

“We don’t use a car to go anywhere downtown anymore,” he continues. “If we want to go to Rivercenter for a movie, we call Uber. It’s so nice to have quick access to the best downtown can offer, right outside our door.”