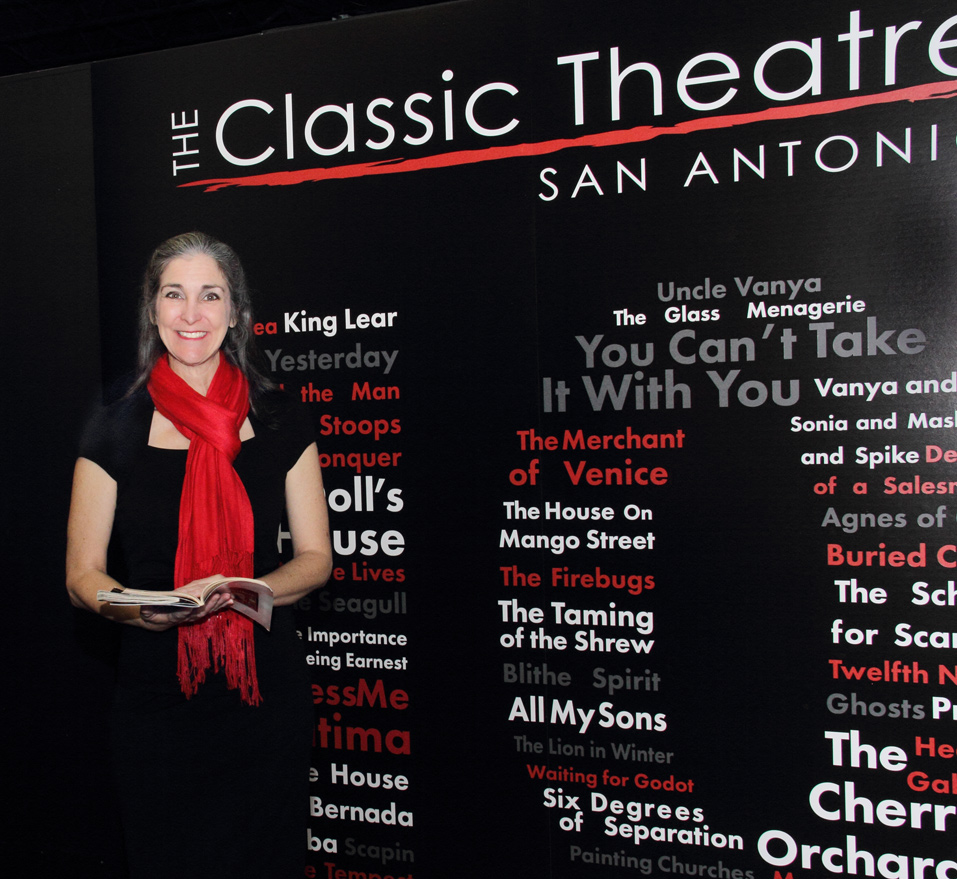 On a quiet afternoon in November, Kelly Hilliard Roush and I take seats right on the stage set for A Doll’s House, the play she directed at the Classic Theater of San Antonio. It’s an interesting experience to be on stage in an empty theater. I had just seen the show a few days before, and the characters and their voices seemed still present in the space.

As a director and a former theater professor, Roush has had many opportunities to see the impact Henrik Ibsen’s iconic play has on students and audiences in general. “It’s one play students really responded to,” she says. “We would talk about it, and it was fun to hear what was exciting to them about it. They wanted to discuss the issues, the characters, everything.” So when she and colleagues started selecting plays for the Classic’s 10th season, she reread Doll’s House and found it still very relevant today, nearly 140 years after its premiere.

The work deals with restrictions that society imposes on individuals, especially in terms of limiting married women’s freedom to function as fully self-realizing adults. “I am excited to explore the play from a humanist point of view, how society shames us into boxes, both men and women,” she explains further. “I grew up in Texas in the ‘50s and ‘60s in a traditional home, but I was not a traditionally quiet, pleasant girl. I like breaking molds and having challenging conversations.”

And theater is the right business to be in for someone like Roush. Molds are often re-examined and broken, provoking lots of challenging conversations. With experience in all aspects of the business — acting, directing, producing and administration — Roush joined the Classic in 2015 as the executive director, taking over from Rick Malone, one of the seven co-founders of the company. Though three of the original co-founders left the Classic years ago, Malone and his wife, Diane Malone, and Allan and Terri Ross — all stage veterans — stayed closely involved until Jan. 1 of this year, when Roush was elevated to managing/artistic director of what is easily one of the best thespian houses in town. She is “honored” to be the one to lead it into its second decade by transitioning from a board-and-volunteer-run organization to a staff-driven one.

“I would like it to become a cornerstone of the community, so that we can continue to tell stories that need to be told in order to find out who we are as human beings today,” says this outspoken theater advocate. “Plays help us know how big or small we can be as human beings, and they teach us that we are not alone in our struggles. Plays teach us to be compassionate and make us realize that we are all connected through human experiences.”

To allow more people to experience the Classic’s Globe Award-winning offerings, her plans include a major marketing push in the upcoming months, as well as the physical growth of the facility, possibly by adding a second space. This may require moving to a new location, as the Classic currently shares its Art Deco District building with the larger Woodlawn Theater, and expansion possibilities are limited. Already in place, however, is an extended run for each production, which allows for word-of-mouth to spread and do its job. In addition, the company is making an effort to reach more Hispanic patrons with Spanish language plays and Latino playwrights.

Down the road, the ambitious leader would like to accomplish something that theater artists would be especially grateful for: pay actors, designers and directors professional-level salaries for their work, “because they are professionals.”

Meanwhile, the current 2017-18 season continues, with Bless me Ultima by Rudolfo Anaya (opening Feb. 16) and The Cherry Orchard, Anton Chekov’s masterful story of a society on the verge of being swept away by the winds of historic change (opening May 4). Two highly respected artists, Jose Ruben de Leon and Andy Thornton, will serve as the respective directors.

Though born in Washington, D.C., young Kelly grew up in San Antonio, where her military father was relocated when she was 2. Her natural propensity to express herself manifested itself early on as she directed her three younger brothers in backyard plays of her own creation, while her mom made popcorn and sold tickets. “I was born to live out loud,” says Roush, who speaks in an animated, enthusiastic way about the things she cares about. “Thank God, I had amazing teachers. In fourth grade we did Shakespeare. I was Ophelia in fourth grade! I give credit to my teachers, who really opened my eyes.” Her high school theater teacher was John O’Neill, one of San Antonio’s premier thespians.

In college, she double majored in English and theater at Baylor, following that up with an M.F.A. in acting at Louisiana State University. The young actress then moved to Minneapolis, one of the capitals of U.S. theater, where she lived and worked for 12 years. That’s also where she met her husband, Bart Roush, who was in the same profession as managing director of a stage company. He asked her to appear in a play he was involved in, “and we fell in love.” To propose, Bart took her to Mexico, where he proceeded to present her with two surprises — the ring, and the news that he was changing careers. He had decided to enroll in seminary to become a Christian minister. Though she didn’t see it coming, it was not a huge surprise. “We had both grown up in faith-based families,” explains Roush, “and after we met. I invited him to go to church with me. That’s how he reconnected to his faith.”

She tells a cute story about how her father reacted when the engaged couple came to visit. “My father was worried that I would ruin Bart’s career,” she says, referring to her disregard of conventionality and her forceful way of expressing her opinions. But Bart had a gracious reply: “I wouldn’t want Kelly to be anyone but Kelly.” In 2003, the Roushes moved to Chicago, where Kelly eventually became assistant professor of theater at the nearby Aurora University.

Today, Bart, who chairs the Classic’s board of directors, serves as the pastor of Madison Square Presbyterian Church, and Kelly and their two sons are in church every Sunday morning. “I don’t want to reflect badly on my husband,” she says. “I love my husband and I love God.” But she is not the traditional pastor’s wife. “I have to be authentic,” she notes.

A big part of her authentic self is, of course, her love of theater and her desire to introduce new generations to the creative experience she had enjoyed as a student. The Classic has an extensive three-pronged educational program that includes internships for older students interested in theater careers; free student performances and workshops based on classic plays and literature conducted in middle and high schools.

Roush loves to watch the students watch the shows because their reactions are spontaneous and direct. The groups that came to see Doll’s House were very involved in the story, and many stayed afterward to take part in a talk-back session. Proudly, she points out that studies have shown a positive correlation between students’ involvement in the arts — and specifically theater — and their academic performance. One teacher who had accompanied her students to see Ibsen’s play wrote a note to Roush, saying, among other things. “…. The kids would not stop talking. I have never seen so much excitement about a show.”