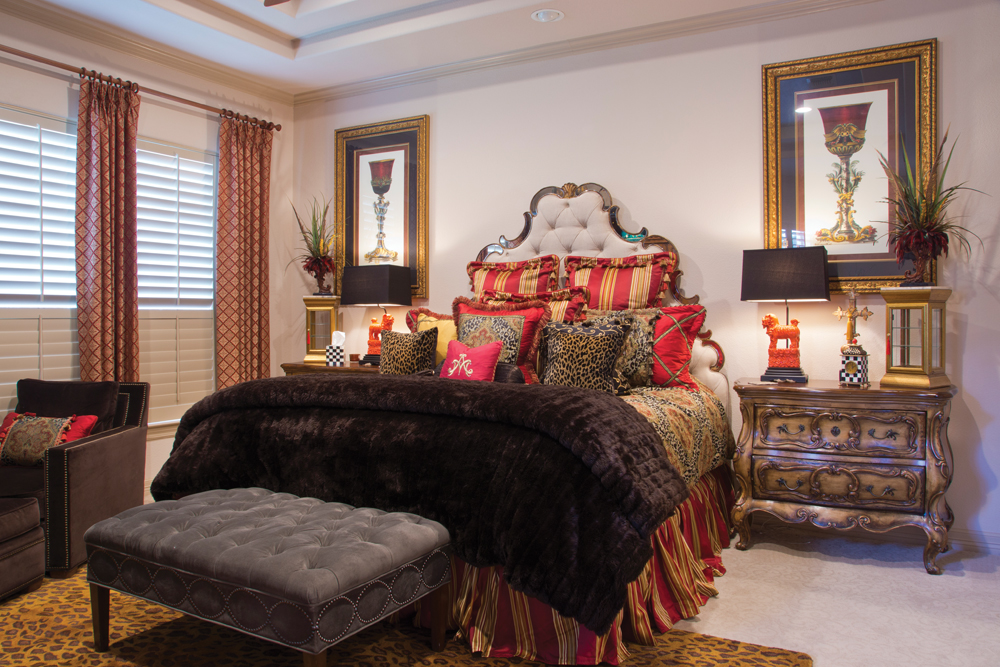 James J. Ivy has a bit of a drive from his home in Canyon Springs Estates to his office in San Antonio every day. Unlike many people, though, he never complains about the commute. “No matter what kind of a day I’ve had at work, I know that once I get home, everything will be peaceful,” he says.

It’s no wonder he feels that way. The home is located on a quiet street backing up to the fifth fairway at Canyon Springs Golf Club. The interior design is eclectic, reflecting the couple’s love of color and a bit of bling. The home contains treasures collected over more than 20 years of work in contracting and design and contains items from all over the world. Furnishings from sources including Henredon, Marge Carson, Matiland Smith and Century are found throughout the home.

“The house was built by Art Burdick of Burdick Custom Homes,” James says. “We were looking for a house with Narcy Nelson of Keller Williams City View. She was friends with the couple who owned this house — her clients at the time — and she asked if we could see it.

“It immediately appealed to both of us,” James continued. “It is a single story ,and every bedroom has its own bath. Every room has special ceiling treatments. The natural beauty of the area is special, and we already knew some of the people in the neighborhood.”

The homeowners closed on the sale of their former domicile and their new home on the same day. Their relationship with the former owners was so good that they were allowed to begin remodeling a month before they closed on the home.

“We moved into a work in progress,” James says. “My remodeling crew was busy with construction. It all came together just in time.” 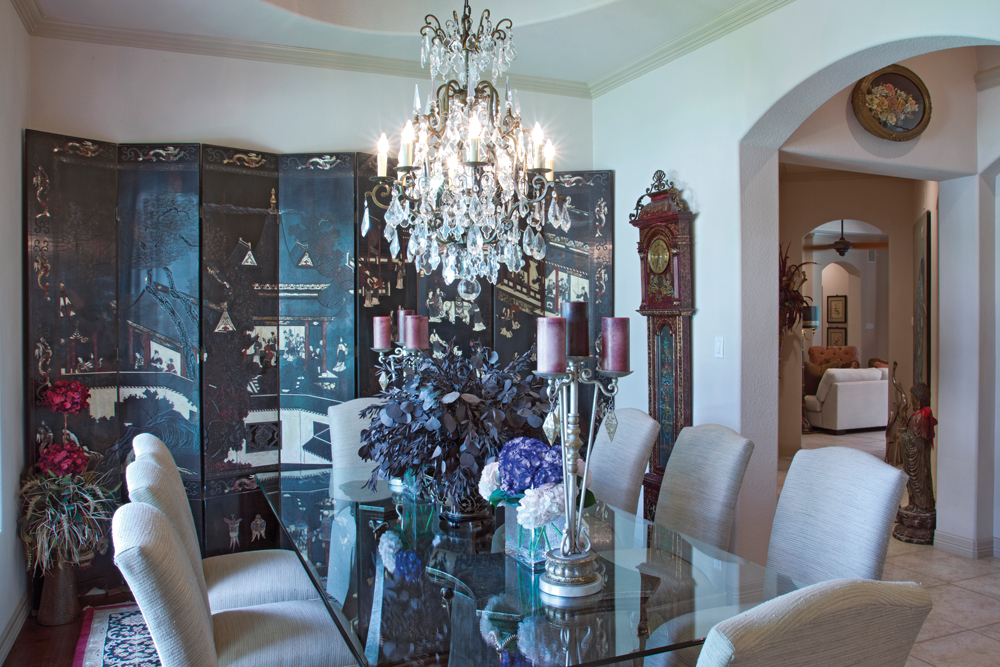 The house is about 3,300 square feet, with three bedrooms, three and a half baths and a three-car garage. While two cats live in the house with them, one look around tells you the house has gone to the dogs.

Fu dogs
“We believe that you should decorate with what you love and that a house should make you smile when you walk into it,” James says. “One of the things we really love are Fu dogs, and you’ll see them in almost every room in the house.”

Fu dog statues trace their lineage back to ancient China. They were originally palace guardians, large statues made of stone. They are designed in pairs, one male and one female. Tradition says they should always be displayed together. The Chinese influence is found throughout the home, as are McKenzie Childs ceramics and Versace porcelain.

To the right of the entry is the study. On the left wall is a hand-carved altar table, sourced from Stowers Furniture in San Antonio. Two ottomans upholstered in faux tiger skin and accented with hand stitching are positioned beneath the altar. The room features Satsuma porcelain jugs from the late 19th century. The built-in bookcase holds a 150-year-old etched gong, amethyst crystals and a hand-carved Thai piece from an old carousel. Across the room are framed mementoes, including a 1947 birthday card given by James’ grandmother to his mother. 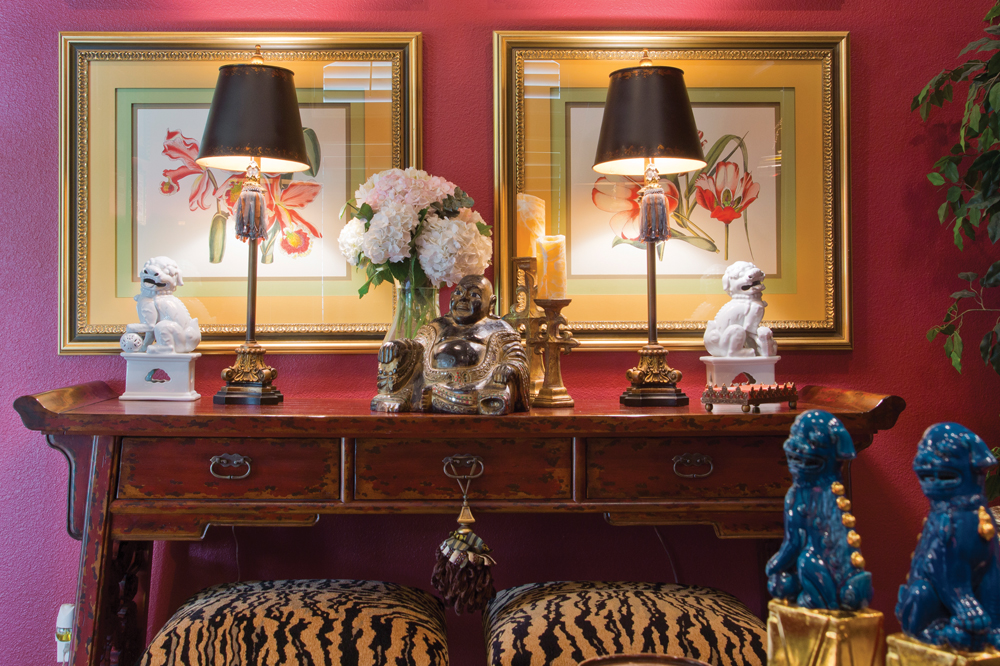 The formal dining room to the left of the entry hall is lit by a large chandelier that came from James’ last house. The chandelier hangs from an oval dome ceiling over a hand-carved table with a sparkling glass top and skirted chairs. Against the far wall is a Chinese screen from Orville Carr’s local antique showroom. The screen is a favorite because of its muted colors. Adjacent to the screen hangs a clock from Hong Kong, unusual because it is hand-painted chinoiserie on reversed glass.

Two 36-inch rose medallion vases flank the entry to the sunken formal living room, where several sets of Fu dogs are placed. The sofa and chairs are accessorized with plush pillows, one of which was made from James’ grandmother’s mink stole. Atop the coffee table stands a 1902 emperor and empress statue that was originally a lamp base; the patina is original. The curio cabinet contains crystal collected from Saks Fifth Avenue, Imari porcelain and a variety of cloisonné pieces. The pair of emperor and empress antique paintings is hand painted on silk.

The short hall to the right of the entry serves as a gallery for one of the owners’ favorite artworks. It’s a lithograph titled Blue Dragons, signed by Christine Tarpey, the artist.

A left turn leads to the master suite, where a huge gilt mirror from Lux boutique guards the entry. To the left sits a delicate Lillian August desk accented with hand-painted inlay and a mirrored surface. The desk chair is upholstered in silk with crushed suede, a rich combination. Hanging beside the desk are two stencils hand painted in gold leaf.

The king-size bed features a hand-tufted headboard with tiny mirror pieces placed around the edge. The bed is dressed in animal print and red and gold striped fabrics. “Red is an energy color, and I love it,” James says. “I use it everywhere.” Fu dog lamps sit atop the bombé­­ bedside tables.
Opposite the bed is a Henredon Arabesque entertainment center containing a large screen television and a variety of international treasures. Fu dogs keep watch on the shelves. 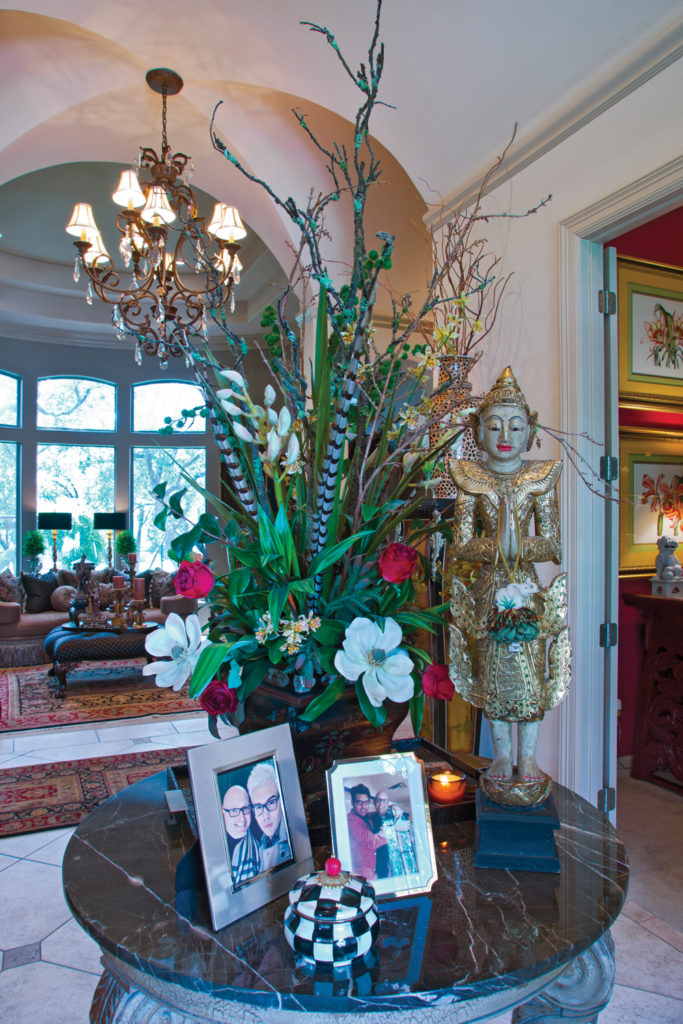 “This pair of teak elephants is from Thailand,” James says. “It took me 10 years to find a pair that weren’t cracked. I found the mother first; she’s hand carved with gold leaf accents. I finally found a baby elephant in a similar style that was whole, and I was so pleased. Pairs such as these were once very popular decorator items, but over time heat cracks the teak. and people have disposed of them. You rarely seem them now.”

The sideboard beside the elephants is mahogany surfaced in glass and accented with mirror slivers. A sizable set of carved and etched candleholders stands sentinel.

The built-in shelves near the sideboard are full of framed photos of family and friends. Grandparents, near and distant relatives, friends both famous and unknown share pride of place on these shelves and show that their greatest treasures are in the people they love.

The coffee table is a special piece, James says. “It’s from Thailand. Notice the gold inlay and the elephant motif. That small box on top of the table is hand-painted teak from Rich Harvest Trading Company in Hong Kong.”
Across from the sofa is a large-screen television set on a hand-painted European chest. “That chest is an antique,” James says. “When I saw it, I had to have it because of the turquoise color.”

Perhaps the most striking item in the room is the large painting of a woman in red playing a cello that hangs on the far wall. “I love music and the color red, so I bought the painting,” James said. “It always gets raves from my guests.”

Behind the family room are the breakfast area and the kitchen. “I love the flow of this space,” James says. “If I’m working in the kitchen, I can talk to guests at the table and see over the breakfast bar into the living room. This is a very efficient space to work in, too.” 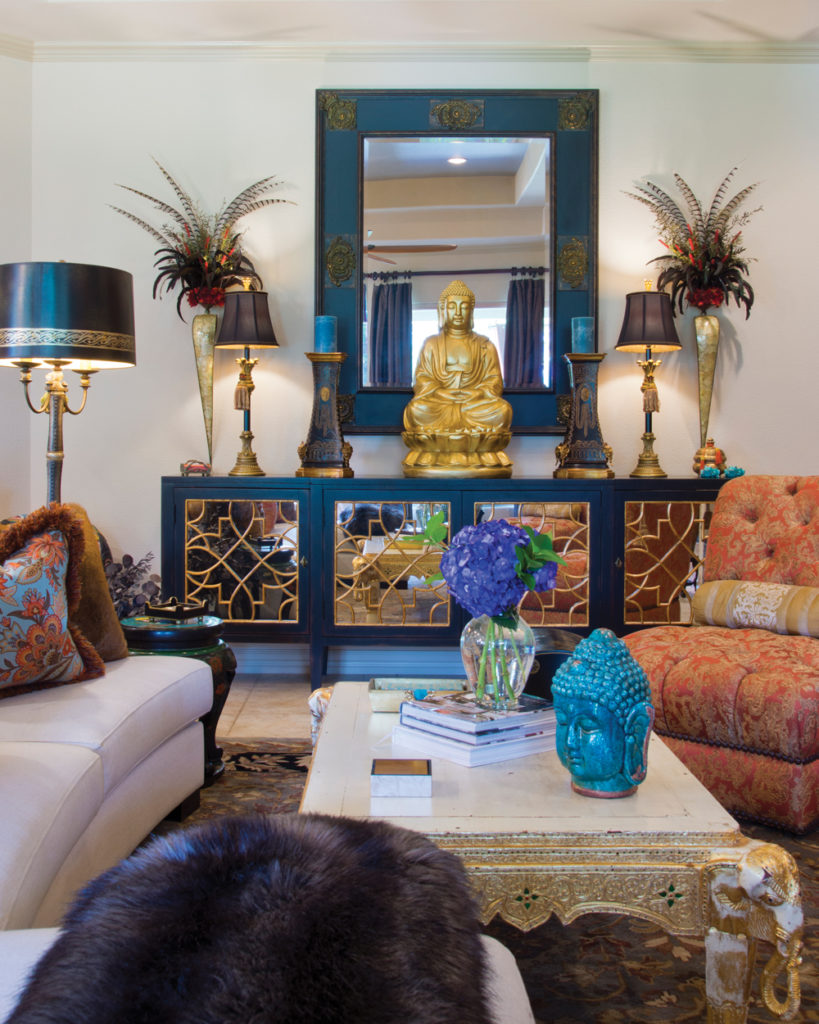 While he loves the flow, he’s ready to change the kitchen’s appearance. The next renovation will have stenciled cabinets. The countertops and backsplash will be converted to Patagonia quartzite.

The breakfast area may get a change, too. Currently the chandelier over the table is of iron and crystal; it’s 5 feet tall. The draperies are 108-inch satin panels hanging from mahogany chocolate rods. Future thoughts include the possibility of a new color scheme, but the chandelier will stay. “It was a challenge to install,” he says.

The covered patio is a great place to watch wildlife on the fairway. It’s furnished in resin wicker with Oriental influences; the pieces are from Crate and Barrel and Pottery Barn. A spacious pergola in the yard provides even more space for entertaining.

“We’re known for our large parties,” James says. “We love to entertain. and when we do, we invite the neighborhood. I think people’s homes are about their life journeys, and this house is a perfect illustration of ours. We’re always happy to share it with families and friends.”