How Downsizing Improved the Life and Career for Busy Professionals

Jody and Stephen Becker own Mother Earth Adult Day & Health Care Center. The thriving business has been the center of their careers for more than 20 years. They established the business on a quiet country road where oak trees and songbirds proliferate. The location offered a large lot for expansion when the time came — something the couple thought they might need. 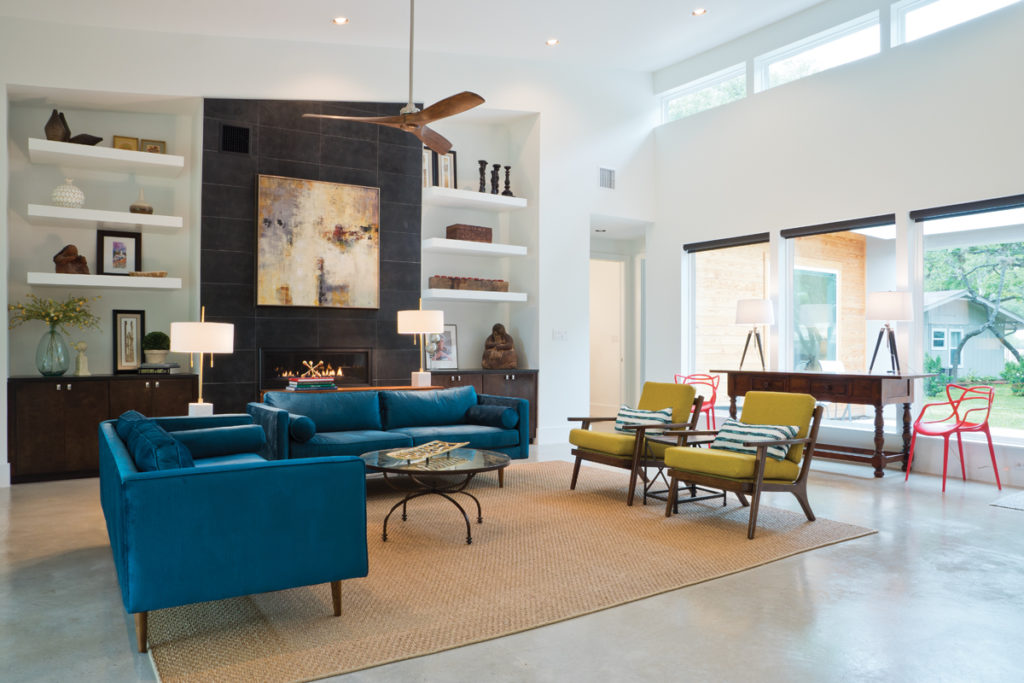 The surprise came in how they used it.
While the Beckers were growing Mother Earth, they moved into a 4,500 square-foot home in Bluffview on San Antonio’s north side. They raised four active children there, watching them graduate from high school and college and move away to establish their own careers and families.

Suddenly the Mediterranean home that once buzzed with children and laughter felt very big and empty. Jody started thinking about downsizing.

Should we stay or should we go?
“It’s a burden to maintain a large residence,” she says. “It’s much less expensive to maintain a small home. And there’s less stuff to deal with, too.”

“The older I’ve become, the less important stuff has become,” Jody continued. “We had 20 years of stuff in this big house and I knew it would take time to clean it up. What would we take and what would we discard? I began wondering what kind of home would make us happy if we moved.”

The pair started house hunting but couldn’t find anything that excited them. In the meantime, Jody got busy searching on HGTV and home improvement websites for designs that might fit the next phase of their lives.

They also began exploring the idea of building on the property next to Mother Earth. There was plenty of room for a smaller home, and living next to their workplace had its attraction. Their daily commute took 25 minutes each way — when traffic was good. “It wasn’t a bad drive,” Stephen says, “but it was a consideration.”

“I spent a lot of time on Houzz.com to figure out what kind of home we wanted,” Jody says. “We talked a lot about what we liked and what would look good on the site and chose a contemporary design. We wanted something that was low maintenance and that would bring the outdoors inside.”

Jody found the outline of a plan on Pinterest. She modified the plan, and the couple chose Bo Broll Homes as their builder and Oscar E. Flores Design Studio as their architect. They set the plan in motion to build next to their business.

Sourcing and selling
“Four months from signing the contract, the foundation was poured,” Jody says. During those four months, she sourced nearly everything for the house, from the cabinets and lighting to exterior finishes and doors.

“Jody has a knack for decorating,” Stephen says. “There’s nothing she can’t do when she puts her mind to it. I liked what she chose, and I really like how it all came together.”

The house was finished in less than eight months. The Beckers put their Bluffview home on the market before their new home was finished, thinking it would take time to sell.

“We had an offer within a week,” Stephen says. “We had to move into our new home while punch lists were still being completed!” 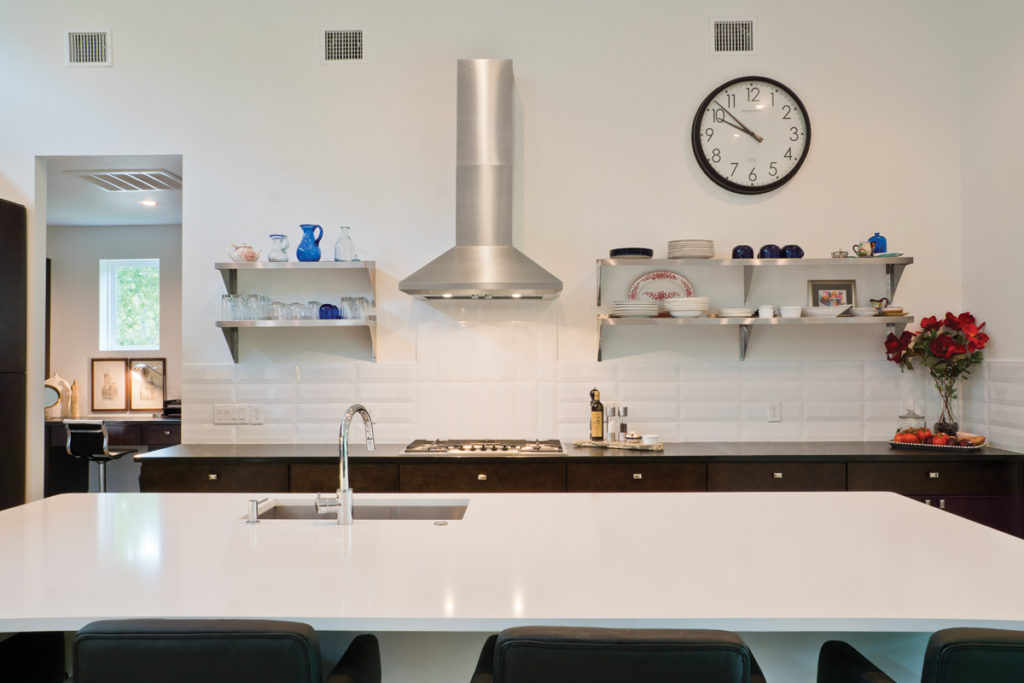 Center space
The two-bedroom, two-bath home is 2,350 square feet of modern living. The bulk of the space is in the home’s center, where the kitchen and living area are located. The room is filled with natural light that pours through clerestory windows on the front elevation and windows that form the north and south walls. The north side of the home opens to the backyard via a set of three massive sliding doors that exit onto a covered patio.

Eschewing carpet, the Beckers chose concrete floors throughout the home for easy care. Most of the countertops in the home are of granite, which Jody says is easy to maintain. Ceiling fans in every room keep the air flowing and help cool the home.

The living area is simply furnished with a modern sofa, chairs and a mirrored coffee table. The gas fireplace is framed by black porcelain tiles finished with metal edging Jody found at Home Depot. Floating shelves on either side of the fireplace hold art sourced locally. The cabinets below the fireplace are surfaced with leather-finished granite.

The buffet beneath the front picture window came from their previous home and is flanked by a pair of red molded modern chairs, part of a set the Beckers use to seat guests. Their gateleg dining table folds up to double as the sofa table when not pressed into dining service.

The kitchen, across the room, is a model of efficiency. The large island is of white quartz. One side of the island is a work surface, with an edgeless stainless sink in the center. The Bosch dishwasher is a favorite appliance because it operates with a whisper.

The other side of the island serves as a dining space, with four black barstools. To the left of the island is a wall of cabinets housing the coffee and wine bar, a wine refrigerator, a French-door refrigerator and a microwave drawer, all finished in stainless steel. The Bosch gas cooktop along the back wall is centered between open shelving that displays glass- and dishware.

Jody has a small office beyond the kitchen that she uses for household projects. The office is decorated with pictures she brought with her from Italy, where she lived as a child. Spacious cabinets border the desk, and a large walk-in pantry opens off the room.

“For a small house, we have an abundance of storage!” Judy says. Even her large laundry room has excellent storage for laundry and cleaning supplies.

To the right of the kitchen is the sitting room, complete with a full bath. Comfortable L-shaped seating opposite the large screen TV is just right for movies or a nap. The colorful painting of poppies came from Nieman Marcus Last Call. “I surround myself with things I like,” Jody says. “I have no mad desire to spend a lot of money for something when I can get what I like online or at an outlet. Half the fun is shopping the outlets!” 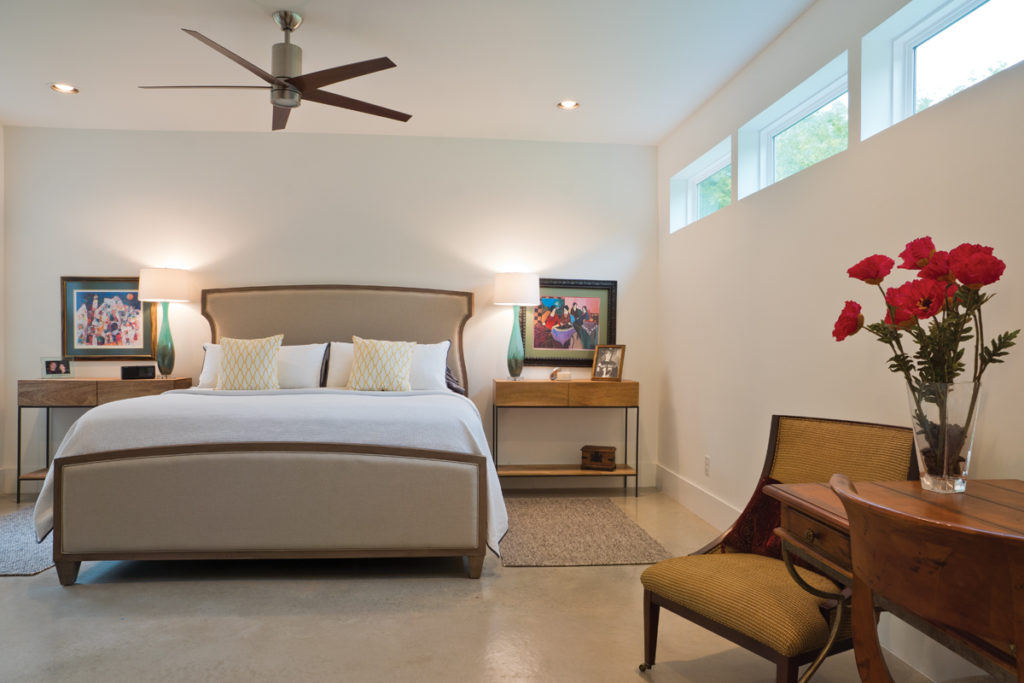 Master and a spare
The guest room and master suite are located across the living area behind the fireplace. The guest room is decorated in shades of white and gray. The king-sized bed is arranged so light from the windows flows over the white comforter. The art is from a trip to Puerto Vallarta. “My favorite artwork is memories,” Jody comments.

The spacious master suite is bathed in light from clerestory and picture windows on opposite sides of the room. The king-sized bed, with its upholstered head- and footboard, came from Basset Furniture. Jody found the side tables at West Elm at The Pearl. The room is simple and spare, choosing to let the view of the oak trees and landscape serve as natural art.

The master bath is separated from the bedroom by a pocket door. To the left is a double dresser sourced from Stowers Furniture and to the right is a double granite vanity. A large mirror with Hollywood lights offers plenty of space for Stephen and Jody to prepare for their day.

Jody designed the large walk-in shower walled in porcelain tile. She installed a Koehler HydroRail shower package with a custom faucet system. The rail provides a rain showerhead and multi-function hand shower wand. “I was thinking ahead when the shower was designed,” Jody says. “Someday we might need a roll-in shower that would fit a wheelchair because you never know what might happen to you. This shower meets that need.”

Like the rest of the home, the master suite has great storage in its walk-in closet. His and hers sections neatly hold the Beckers’ wardrobes.

Downsizing and upsizing
The Beckers agree that downsizing their home was the right move for this time of their lives. They spend less time maintaining their home and yard and more time enjoying family and friends. They recently hosted their daughter’s wedding at their home, hanging lights from the trees and opening the sliding doors to facilitate the flow of guests.

“The house was perfect for that event,” Jody says. “We had plenty of room to accommodate everyone. And when the party was over, clean up was easy. What more can you ask of the home you love?” 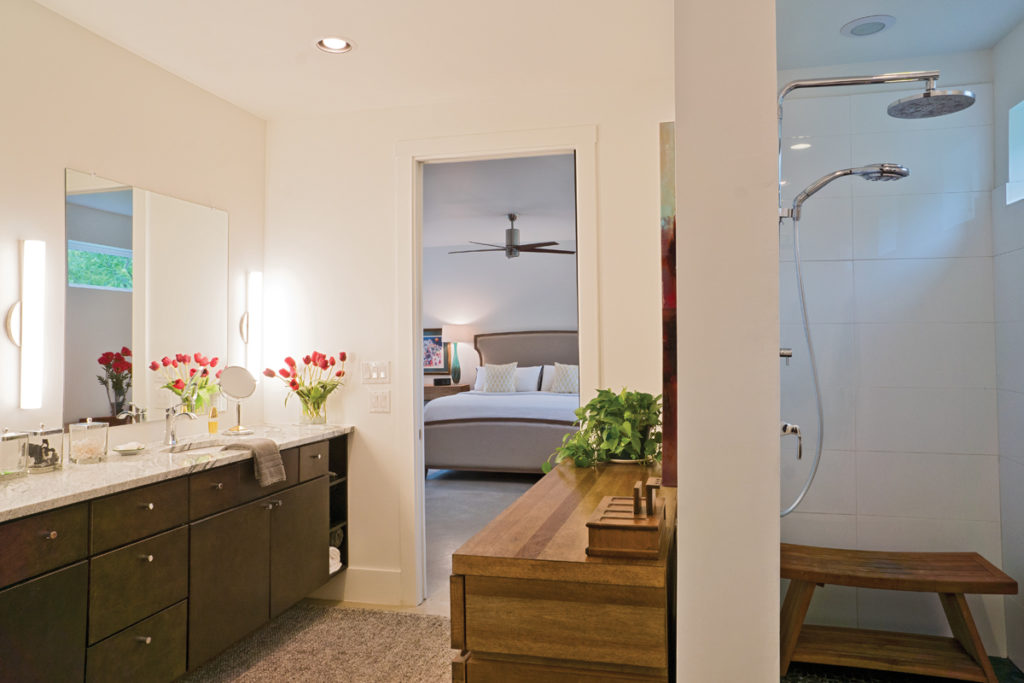