As a student at Southern Methodist University, José Campos took advantage of a study-abroad program to spend a semester in Nantes, France, learning the language and immersing himself in the local culture. The experience was so rewarding to him that upon graduation, he promptly returned to France to work for a French government project in Grenoble, teaching English to disadvantaged school children.

Back in the U.S., and armed with degrees in economics/finance and political science, Campos spent a summer working for an investment firm in San Francisco before joining a friend in the short-lived business consulting firm, Dan & Camp, which helped a variety of clients with growth and marketing strategies. That was good preparation, he says, for his next undertaking. In early 2015, he and partner Jorge Herrero opened the now popular CommonWealth Coffeehouse & Bakery on Davis Court, near the intersection of Broadway and Hildebrand. Only 26, Campos sums up the partners’ roles this way: “He is the money, I am the work.” 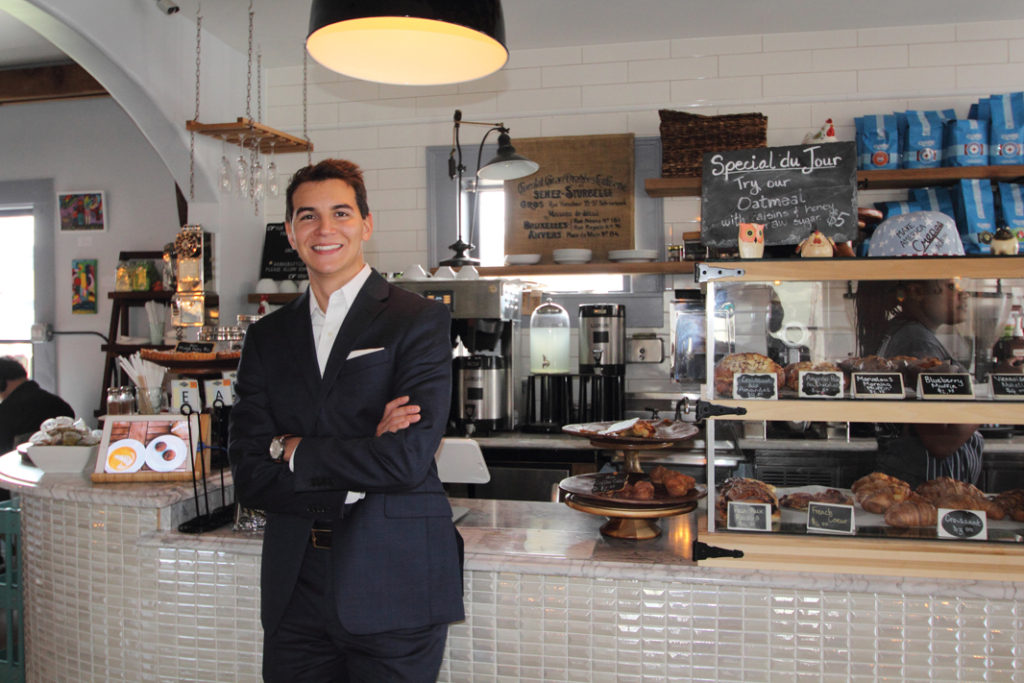 Whose idea was it to open a coffee shop?
It was Jorge’s. He has a successful real estate company, and it was his dream to open a small, intimate coffeehouse. When I got involved, I brought in the French aspect. I said: Let’s bring in the artisanal traditions that exist in France. You have to offer something unique, and we do. There is nothing quite like this in San Antonio.

How did you find your French baker and chef?
My French friends told me about the sites that bakers go to, to look for jobs, so we advertised the position on those sites. Two hundred people responded. We conducted 30-40 Skype interviews, and in December 2014 I went to France for the final face-to-face interviews. That’s how we got (baker) Vincent Lacoste, who makes absolutely the best croissants in town. Our chef, Olivier, is also French, but he was already here in San Antonio, so that was easier.

And now you plan to expand to other locations. Tell us about it.
We already have a contract with the city to move into Hemisfair, which is likely to happen in March. Very exciting! We are also working with the Baptist Health System to open kiosks in three of their hospitals, and we are exploring the possibility of opening coffee shops in two office buildings. They see us as an amenity, and we are ready. I think it’s cool. If we do this right, what’s stopping us from going well beyond that?

How did you come up with the CommonWealth name?
The name invokes a sense of community; we liked that. We do a lot of projects with local nonprofits – sponsor fundraising galas and make donations. We are in a residential area, and we like to cultivate a feeling of community.

Can you tell us a little about your background and your family?
My entire family is from Mexico City, but my siblings and I were born here. We spent summers in Mexico, and we still speak Spanish at home. All my close relatives have relocated to San Antonio now. Both my parents are entrepreneurs, and both are in the real estate business with their own separate companies. My mom’s business is America Realty, and my dad bought a RE/MAX Elite franchise. He’s also named José Ramon. I am José Ramon IV. I like to think that I have the entrepreneurial spirit, too. In fact, I want to start an investment group to invest in real estate projects, something I have been interested in since I was very young.

What kind of impact did your time in France have on you, besides obviously educating your taste buds?
I think it’s a necessity for everyone to study abroad. Take a leap, get out of your comfort zone! In Nantes I had to learn French fast because no one spoke English. I was definitely out of my comfort zone. It also opened up a new horizon for me. It made me hungry to see and learn more. I have now traveled to 36 countries. Among my favorites were Turkey, Serbia and Bosnia. Last year I went to Lebanon to work with Syrian refugees for a short time.

With refugees! That must be tough.
Actually, I co-founded a nonprofit here at Trinity University, the International Humanitarian Crisis Initiative, with a Syrian student, Yara Samman, (and a few others). Texas takes more refugees than any other state, people who have been brought in legally. We try to help them integrate into our society. A bunch of students from the Near East are helping with the work.

What are you personally focusing on right now in your business?
We have a good manager who runs the coffee shop, so I am mostly dealing with the expansion – contracts, marketing, dealing with the city and logistics in general.

Any advice for young people who wish to start a business?
Go for it, but make it unique. You have to distinguish yourself from others. It’s a risk and you may fail, but you’ll learn from your mistakes. That’s what the U.S. is all about – taking risks. I think it’s fun. CommonWealth Coffeehouse is a good example of how something can come out of nothing when you have a plan and work to realize it. I love building, creating something. You can really see the results and effects of your work.