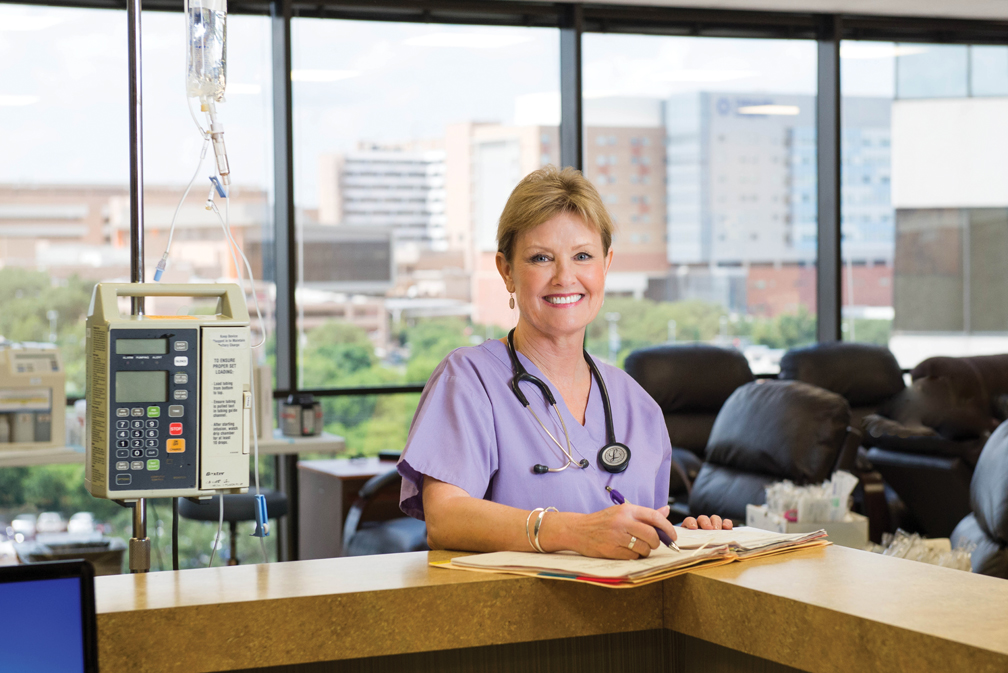 In 2015, Kay Scroggins was one of only five CEOs to receive the inaugural C-Suite Award from the San Antonio Business Journal in the category of small/midsize businesses. No one was surprised. Since 2001, Scroggins has been successfully running Clinical Trials of Texas, one of the largest independent clinical studies sites in the U.S., which has participated in nearly 1,000 trials. Clinical trials are a crucial link between the invention of a new drug — or medical device — and the patients who may someday benefit from these inventions.

When I arrive at the Tower II medical building on Floyd Curl Drive to interview Scroggins, she first takes me on a tour of the large facility that occupies 2 ½ floors of the edifice. We walk by exam rooms, data rooms, labs, offices, a climate control drug storage room, a call center (for the recruitment of study participants), an infusion studies facility and even dorms for patients who have to stay overnight — it seems to go on and on. Eighty studies are in progress right now, including research on therapies for diabetes, Alzheimer’s, depression, ADHD, sexually transmitted diseases and various dermatological conditions.

“I feel like we are making a difference for the future treatments for many diseases, and we are employing people, helping them to support their families. This last part has become so important to me.”

In the area of diabetes, CTT is testing new drug delivery systems and blood sugar monitoring devices called wearables. The specific one they are looking at is a quarter-size glucose sensor that patients wear on the arm to continuously monitor their blood glucose levels. “One day, there will be no need to prick your finger to test your blood,” explains the CEO, who is a nurse by training. “Several companies make these devices already, but this one is smaller and hopefully better. Wearables will be huge in this industry.” Another study is testing an under-the-skin implantable device that releases medication for months before it needs replacing, and yet another is following the effects of a non-insulin drug for type I diabetes.

Though diabetes is widespread in San Antonio and all over the U.S., the disease that Scroggins sees as the gravest threat at this time is Alzheimer’s.  “One in nine people older than 65 gets Alzheimer’s, and that becomes one in three at age 80,” she says. “At present, no one gets well, and no one gets better. It’s only going to get worse if we don’t crack the nut.” Since studies have shown that the disease starts 10-15 years before symptoms appear, some research is focusing on how to prevent the buildup of the beta-amyloid plaque in the brain that eventually destroys brain cells and their ability to communicate. Dr. Harry Croft, a psychiatrist who is in charge of the studies, explains that certain compounds, called monoclonal antibodies, have been found to target the protein precursors of beta-amyloid and thus prevent the formation of toxic plaque.  So one study is collecting data on how that process develops by following brain activity via MRI and PET scans. “These are expensive and time-consuming trials, but Kay insisted we do them,” says the doctor. Meanwhile, more modest projects look for treatments that will help patients and their caregivers manage their lives better. Both Dr. Croft and Scroggins point out that the government spends a lot more money on cancer and heart research than on Alzheimer’s, even though the incidence of the former two is declining while Alzheimer’s is on the rise.

Dr. Croft is one of 30 physicians who are partnering with CTT as supervisors of studies in their specialties. CTT also has a full-time medical director on staff, Dr. Douglas Denham. 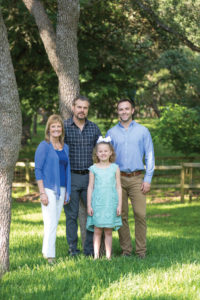 A challenge for all clinical trials is to find enough willing volunteers to take part in them, and CTT is no exception. The company employs a range of tactics to recruit participants, who receive free care as well as compensation for expenses. Scroggins emphasizes that the participants not only gain access to medications that may not be available to the general public for years, but that they also get a battery of exams and tests that could be cost-prohibitive otherwise. All are being monitored throughout the process, and the staff is always ready to answer their phone calls. “The volunteers are medical heroes,” she notes. “One man in the Alzheimer’s study said, ‘I just may be the cure for Alzheimer’s. Even if this doesn’t help me, it may help others in the future.’ We are always looking for more volunteers.”

Considered somewhat of an innovator in the field of clinical studies, Scroggins adopted a novel model of operation. In the past, most clinical studies were done in academic settings or doctors’ offices. Now, companies like hers are the link between the pharmaceutical manufacturers that develop the drugs (“sponsors” in industry parlance) and the physicians, a link that provides a research site, recruiting and data handling expertise. Needless to say, it’s a highly regulated industry, where quality control and quality assurance are essential. Scroggins is proud that sponsors can always rely on CTT data when they submit the results to the FDA for approval.
For her personally, the work is deeply satisfying: “I feel like we are making a difference for the future treatments for many diseases, and we are employing people, helping them to support their families. This last part has become so important to me.” 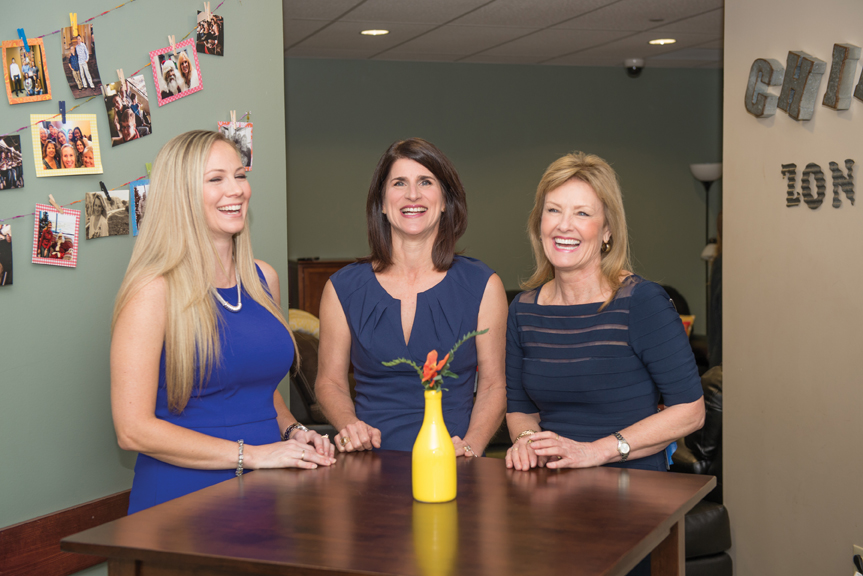 As a young girl growing up in an oil-field town near Big Spring, young Kay loved basketball and hoped to someday become a coach. But then her father committed suicide when she was 11, and life changed overnight. A few years later she dropped out of high school to get married and have a child. Fortunately, after her daughter was born, the young mother earned her GED, went to college and later to nursing school. “I loved science and learning,” she says. “Nursing is both scientific and helpful to people. You can do so much with a nursing degree.”

“I am very open with the team regarding where we are as a company, and I also listen to their input and concerns. In addition, we believe that family comes first. It’s important to take time to attend children’s and family events (even during work hours). And we have excellent benefits.”

Her first jobs were with the Scott and White Memorial Hospital in Temple, including a year as a research assistant in nursing education. In 1986, the family — which by that time consisted of her second husband and two more children — moved to San Antonio, where her career took off, increasingly gravitating toward clinical research. She eventually became the director of clinical research at Preventive & Diagnostic Medicine, before launching CTT with herself as the sole employee.

Today, the company employs 60 people and has been named one of the Top Workplaces in San Antonio by the Express-News four times in a row. “That was so gratifying,” says the CEO in her rather understated way. “It reflects our core values. I am very open with the team regarding where we are as a company, and I also listen to their input and concerns. In addition, we believe that family comes first. It’s important to take time to attend children’s and family events (even during work hours). And we have excellent benefits.”

She is quick to credit all who helped along the way, including son Rick Greenfield, who joined in 2002 but left last year to run Real Time: CTMS, a new entity he and his mother co-founded. “He’s a visionary who has helped us grow beyond what I would have done on my own,” admits the CEO.  She also praises two of her current “key decision makers” – Leisel Koerber and Lele Simmons, respectively, the administrative and development heads of the operation. The three of them are currently on a mission to take the company to the next level.  In her spare time, Scroggins is also “a big child advocate” and a supporter of mental health services.

Listening to her, one begins to understand why she is so liked by her employees. She clearly cares for people and believes in giving credit where credit is due. No wonder her motto in life is  “Be kind and fair to people, and be honest with yourself and others.”