Hydroponics Flowing into Our River City 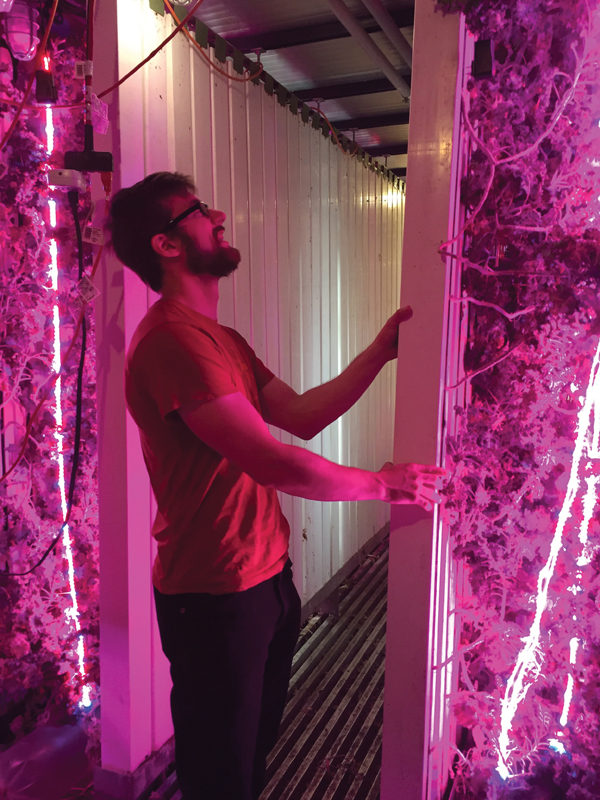 Hydroponics, Greek for “working water,” is basically growing plants without traditional soil or sunlight and has seeped into San Antonio commerce. Growers cultivate plants indoors, often in condensed vertical spaces, in containers of porous material such as peat, sand, gravel or a synthetic. The material supports and aerates the roots as it channels nutrient-rich water solutions to them. Growers also control light waves to steadily maximize plant growth.

The shipping container sits inside a downtown warehouse Hagney also manages, called the Local Sprout Food Hub, which houses other food-related, symbiotic businesses that buy from or service one another: a coffee roaster, a honey company, a healthy snack vending company, a garlic slow-roaster, a jelly maker, vegetable delivery trucks and food trucks. Local Sprout hydroponics has a second location at the San Antonio Food Bank, which is income-generating rather than food-supplying for the Food Bank. Local Sprout sells its vegetables at the Pearl’s farmer’s market and to several farm-to-table restaurants, such as 5 points local, PharmTable, Esquire and Rebelle.

Hydroponic gardening may not be the same spiritual journey nature lovers gravitate to, but it does yield reliable results. Because of controlled variables, the hydroponic growth rate can be 20 to 50 percent faster than traditional plants’ growth rate, and plants grow larger. Extra oxygen in hydroponic growing mediums stimulates root growth and encourages nutrient absorption. These nutrient water solutions deploy to root systems several times daily, so plants don’t have to search soil for nutrients and break down food. Instead, plant energy goes straight to growth and fruit production, like pizza being delivered to a couch potato, but with more productive results. Hydroponic plants also experience fewer problems with bug infestations, fungi and disease.

Sustainability is a top priority for Hagney, more so than remaining purely organic or purely synthetic, which he doesn’t think is  optimally sustainable if strictly adhered to. For pest control, he uses a combination of resources; Terminix treats the warehouse space so there aren’t many insects even reaching the shipping container, coated inside with a closed-cell spray foam insulation. But for pests that do succeed, he uses beneficial insects and soaps that cover the gills of insects like aphids. The Food Hub’s garlic roaster happens to occupy warehouse space immediately next to Local Sprout, emitting rich garlic fumes that Hagney surmises might also deter pests, just as garlic can on garlic-eaters’ skin.

Hagney is a soil gardener also and acknowledges that not all dirt-diggers gravitate to hydroponic’s clinical setting. Perhaps a hippie at heart, Hagney keeps a clear vision of bottom-line resourcefulness,

“What I love about hydroponics is I don’t waste anything,” he says. Unused nutrients cycle back in closed circuits of water and work again for the next crop of vegetables.

When water gets low, he incorporates what’s left into new mixes of fertilizer and supplements of microrizal fungi. Local Sprout’s shipping container is repurposed, and the vertical sleeves the vegetables grow in are constructed from recycled plastic.

Nature can simply be inconsistent and unpredictable. Hagney notes, “A landscape is not an intrinsically unique entity,” but all entities can be harnessed in hydroponics. Hydroponic growers can replicate flavors that occur in nature by controlling unpredictable variables, like fertilizer’s macro and micro elements, structures plants hold onto, permeability, air and water temperatures, light intensity and wave lengths, spacing, water pH, microorganisms, even the  angle of land. Hagney mixes his own nutrients from an online hydroponics supplier. “In a controlled environment, you can increase CO2 by two to three times and increase the yield substantially,” he says.

Hagney adds, “The reason I do hydroponics is not to make a quick buck. This version of agriculture will be what cultures rely on in the future.”

This much is true: Hydroponics definitely appeals to rocket scientists. NASA has experimented with it for years and now fully embraces hydroponic gardening for its space programs. In August 2015, International Space Station astronauts finally sampled space roughage they’d been growing hydroponically for years. Astronaut Scott Kelly might not have gotten to famously muse, “One small step for mankind…” but he did get to quip, “Tastes like arugula!” For future long-duration missions, life support will prove more efficient with plants grown on site rather than via resupply. And not only does space farming supplement a healthy diet, but plants remove toxic carbon dioxide from spacecraft air and produce oxygen.

And just in case this seems too out-of-this-world, remember your elementary school science project, with the pinto bean wedged in a wet paper towel growing roots and shoots? Or that potato suspended on toothpicks in a glass of water on the kitchen table?