Atlee B. Ayres was one of the most prominent Texas architects of the 1920s. He designed homes for San Antonio’s well-to-do, among them the home that became the Marion Koogler McNay Art Museum.

According to the Light newspaper in 1921, Ayres “drew plans for an even more sumptuous residence [in Monte Vista].” The house was an adaptation of the Italian style and was built for the princely sum of $100,000. Constructed of light cream brick and white ornamental stone, it has a terra-cotta roof and a terrace of black and white tile. Built at that time for Dr. F.L. Thomson, president of Grayburg Oil Company, it is now home to Bruce and Anna Liesman and daughters Tessa and McKenna.

The corner lot is three-quarters of an acre, one of the larger placements in Monte Vista. It sits high on a hill — “as high as the South Texas Medical Center, although you’d never know it,” says Bruce. 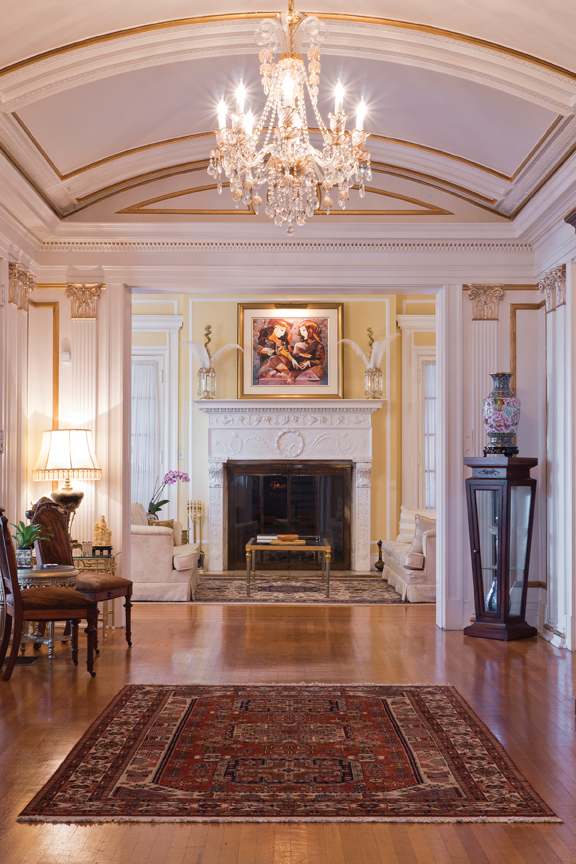 Ayres was noted for his innovative architecture, and this house is a prime example. It has a full basement that housed the original coal-fired boiler in what amounts to a concrete bunker.

“We understand that Ayres was known in his later career for building fireproof homes,” Bruce says. “This may be because he saw so many of the old wooden Victorian homes burn. The basement is really a concrete box for the boiler. The radiators for the steam system are inset in the walls and surrounded by concrete boxes and metal gratings for extra protection. Even though a modern heating and cooling system had been installed prior to our acquisition of the home, the boiler, now converted to natural gas, still works.”

Bruce added, “This house is built like a commercial building, using steel-reinforced concrete. Ayres was a pioneer in using this kind of construction in a residential structure.”

Stately — and For Sale!
The Liesmans were living in Alamo Heights when this house came on the market. “We’d discovered it years ago and were stunned by the grandeur and beauty of the exterior architecture,” Bruce says. “It was so stately, and I was so intrigued with the architectural anomaly of a full-size window on the second floor being featured in the middle of the large chimney on the east side. We drove by the home routinely, paying respect, but never really thought it would someday be ours.”
The “For Sale” sign went up in 2013, and fortune smiled. “We walked in for a tour, and it was amazing. The integrity of the original house had been kept. The grandness of the dining room with its magnificent chandelier, the original tile and ornate plaster moldings throughout the house — it was stunning. The only renovation had been in the kitchen and glassing in a porch in the 1980s. The rest of it was all original,” Bruce says. 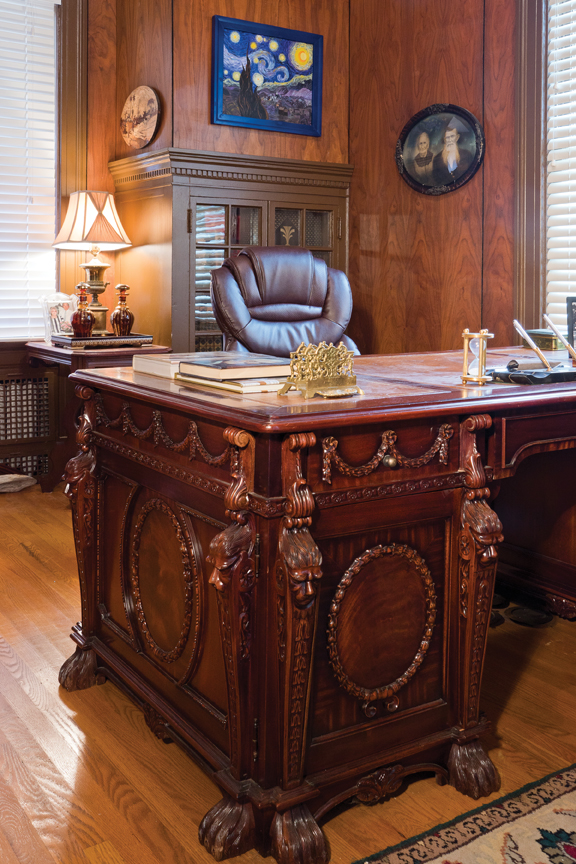 “We spent three months agonizing about buying the house,” he continues. “The decision about becoming stewards of an historical home would determine the course of the rest of our lives. We took the leap and know it was the right decision.”

Grand reception
Bruce obtained a copy of the house’s original floor plans, so he identifies each room the way Ayres did. The front door opens into the grand reception hall, a long room with a barrel-vaulted ceiling accented by ornate plaster moldings. Bruce personally applied gold leaf to selected moldings to restore the room’s original glamour. The chandelier that hangs in the center of the room is a recent acquisition to commemorate the couple’s 30th anniversary. A large Italianate bookcase holds a collection of antique glassware, Chinese vases and carvings. “One of the wonderful things about having a large house is that we finally have room to display and store many of the things we’ve collected over the years,” Anna says.

To the left of the reception hall is the grand salon. The centerpiece is the mantel, which the Liesmans have been told may be the work of Hannibal Piante, a noted local artisan who cast all the terrazzo moldings and columns on the home’s exterior.

The room is simply furnished with two white sofas facing across a glass coffee table. A concert grand piano anchors the north side of the room, and several occasional tables and individual seating areas are near the French doors at the other end of the room.

The focus of the grand salon is art. The Liesmans’ assemblage runs the gamut from traditional to contemporary. Work by local artist and friend Roberto Lozano is displayed, along with a beautiful oil and acrylic painting by Bruce. Over the mantel hangs a giclee print by Russian artist Oleg. In the corner by the piano are two prints by A. Della Corte. There’s also an original oil and collage by Antonio Arellanes. “We don’t really have a style,” Anna says. “We hang what we like.”

Through French doors at the south end of the grand salon is the sunroom, whose focal point is an Italian pietra dura inlay table, made of black marble inset with semiprecious stone in floral designs. The table is surrounded by lush greenery that thrives in the sunroom. A wooden bar, found at a Kerrville estate sale, sits near the table. “This is a working bar,” Bruce notes. “It gets a lot of use during parties!”

Dining in Style
The dining room is enormous. The linear molding is of gold leaf, again Bruce’s handiwork. The Baccarat-style chandelier is huge, throwing rainbow prismatic effects across the room when the sun strikes. Sconces matching the chandelier grace the walls, and an oversize Turkish rug lies beneath the dining table. “This room has 17 doors,” Anna says. “This house was built to circulate air.” 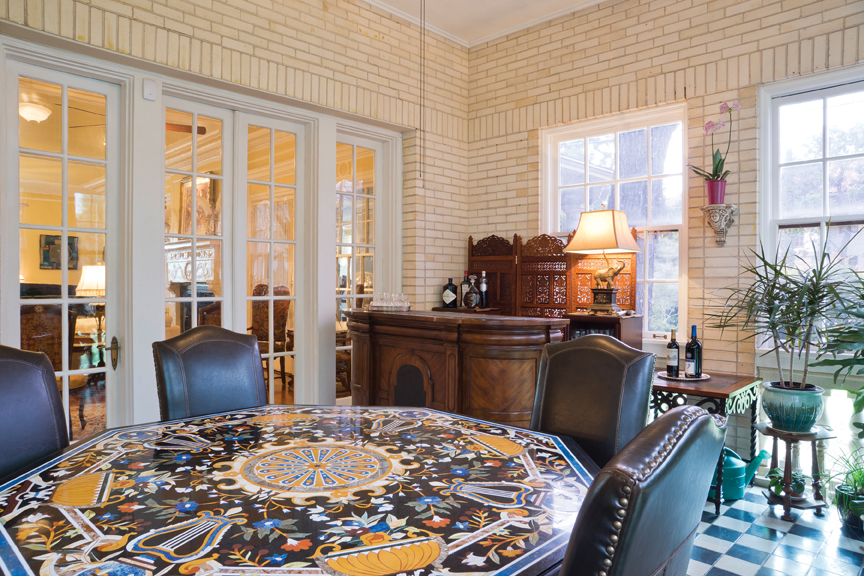 In contrast, the breakfast room is small and cozy, with red tile floors and lots of windows. The small oak table belonged to Bruce’s great-grandparents. An old-fashioned wooden icebox, rescued from an old home in Cuero, serves as a medicine and first-aid cabinet.
The breakfast room has access to the large modern kitchen. The tile floor is original in a gray and white hexagon pattern. There is a rear door that was once the service entry.

Historic library
The library, which serves as Bruce’s office, is across the foyer from the kitchen, near the base of the grand staircase. The room is richly paneled, with built-in bookcases and high windows. This room has its own bit of history. Matt Garcia, a Texas state legislator, lived in the house at one time. In order to keep up with events in Austin, he installed a teletype in the library. The hole where the wires connected to the control board in the basement is still visible beneath Bruce’s desk.

Besides rafts of books, the library serves as a place to display more art. There’s a copy of Van Gogh’s The Starry Night that Bruce painted when asked to portray Van Gogh for a school program and a treasured photo of his great-great-grandparents. Another large collage by Antonio Arellanes hangs here, too.

The butler’s pantry in the basement holds the couple’s extensive collection of china and glassware. “It’s such a luxury to have everything stored in a place where we can access it easily,” Anna says.

Upstairs gymnasium
Upstairs are four bedrooms. One is the master suite and another is a self-contained suite for Tessa. The rooms are large, and the windows are sized to admit lots of fresh air and sunshine. Tessa’s bedroom and Anna’s dressing room were originally sleeping porches used in the summertime, so neither is air-conditioned. Portable units fill the bill until cooler weather arrives.
Every woman who visits the upstairs falls in love with the huge linen closet designed to store enough sheets, blankets, towels and assorted linens for an army. “The really neat thing about this,” Bruce says, “is that when you open the door, the light comes on inside the closet. The light is actually shown on the house plans. This is 1921 electrics at work!” 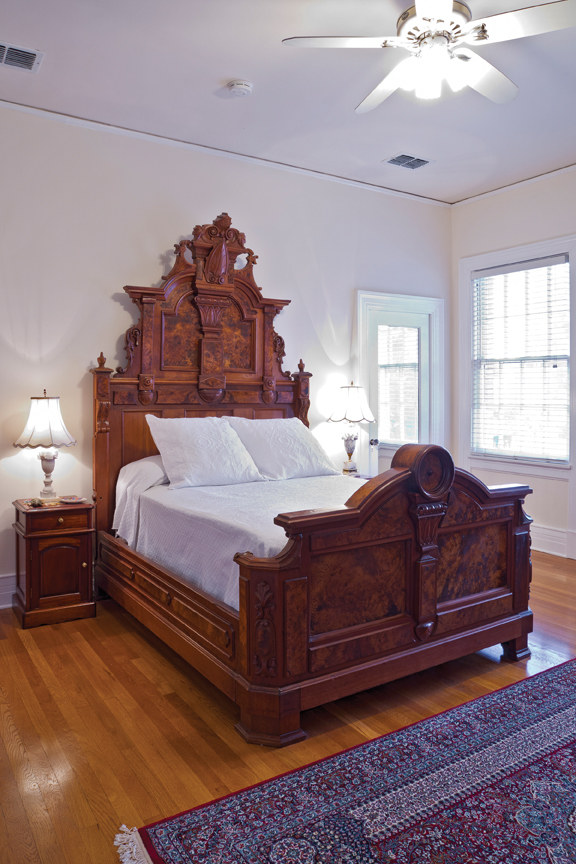 When Ayres designed the home, at the specific request of Dr. Thomson he constructed a large room upstairs that served as a gymnasium. According to records, it contained numerous exercising devices, including a rowing machine, punching bag and trapeze, as well as a locker and shower facilities.
“We really didn’t need an exercise room,” says Bruce, “since we use one of the downstairs porches for that. When I saw this room, I knew it would be the perfect family room. It’s a great place to gather, hang out and relax.”

Tending a legacy
The Liesmans are very mindful of the responsibilities of tending an architectural legacy and the importance of sharing it with the community. “We’ve hosted the Monte Vista Association, the International Piano Competition and the Classic Theatre of San Antonio and look forward to hosting other community events,” says Bruce “An historic home like this should be shared.

“We feel extraordinarily fortunate to live here,” the couple agree. “To be stewards of this house is such an honor.” Anna sums it up: “After all is said and done, we love it here. It’s home.”