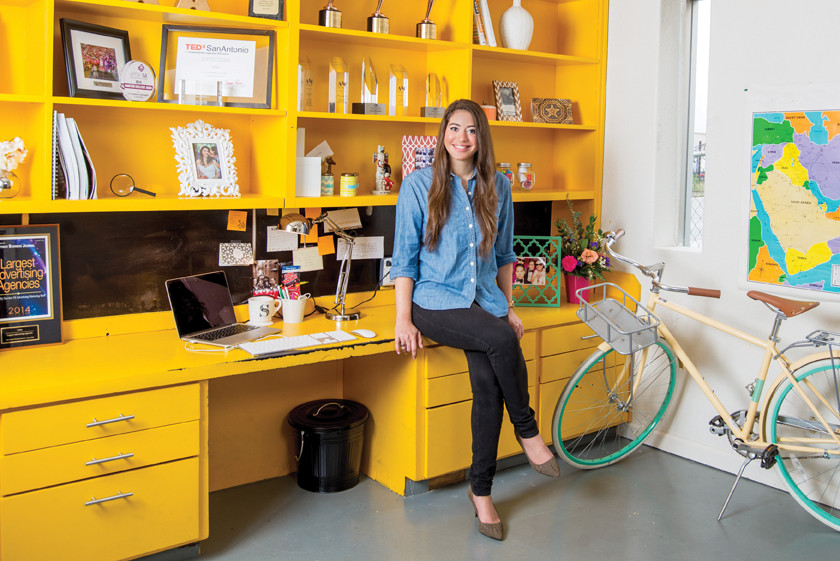 Why she’s a role model: Started her own successful business, Tribu Digital Agency, at the age of 22. Pays it forward by mentoring students at Boerne and Communication Arts High Schools throughout the year, helping them with capstone projects.

Favorite travel: She and husband, Jason, have made trips to Alaska, Greece, Mexico and Colorado. “We take lots of vacations and weekend getaways because we work so hard,” she says. She credits her parents for her love of travel, especially trips they took to Egypt and Syria.

Her role models: Her parents and many mentors. “Work balance is important,” says Helmy, but she admits to taking work home.  “That’s where I do my planning.” Often, Helmy will take three or four hours just to unplug and will not take calls. Disconnecting, she says, helps her relax and recharge.

What she watches: While she doesn’t watch much television, Helmy and her husband have a Sunday night ritual watching Game of Thrones and The Walking Dead.

Words to live by: Her favorite quote is by American independent film director Jim Jarmusch – “Nothing is original. Steal from anywhere that resonates with inspiration or fuels your imagination. Devour old films, new films, music, books, paintings, photographs, poems, dreams, random conversations, architecture, bridges, street signs, trees, clouds, bodies of water, light and shadows. Select only things to steal from that speak directly to your soul. If you do this, your work (and theft) will be authentic. Authenticity is invaluable; originality is nonexistent. And don’t bother concealing your thievery – celebrate if you feel like it. In any case, always remember what Jean-Luc Godard said: ’It’s not where you take things from – it’s where you take them to.‘“

What she reads: Helmy relies on industry magazines. When she has time for books, she reads them on her phone. Last read –A Heartbreaking Work of Staggering Genius, by Dave Eggers.

Favorite spots in San Antonio: Her mother’s porch with its amazing view, any Local Coffee location, The Pearl and Travis Park, which Helmy has been instrumental in rebranding.

When many of her contemporaries were merely thinking about their futures, Sara Helmy was living hers. At the tender age of 21, having planned her career path carefully with summer internships at San Antonio agencies throughout her college years at Texas A&M Corpus Christi, she got the inclination to start her own business. Helmy lost her father that same year. “I learned how short life was. I threw myself in and saw personal growth, which gave me the confidence boost to try,” she says. At 22 that meant mustering the courage to leave a secure post-college “awesome” job, as an agency operations manager in a declining economy – a bold move at a risky time to try a startup.

Helmy had not only her experience to draw from but also the example of her parents. Her father had an impressive career as an architect, then as a professor at UTSA and a Ph.D. Eventually he started a plastic-manufacturing company and secured several patents, a path full of trials and triumph. Her mother took over the business and was most supportive of her daughter in her aspirations.

Helmy’s journey was punctuated with individuals who had an effect on her. “I’ve had probably a hundred mentors,” she explains. Having attended Health Careers High School, she didn’t surprise anyone when she chose bio med as a college major — “I was trying to make myself love something.” A professor pointed out she was more social than her fellow science classmates and suggested she reconsider her chosen field. An advisor pointed her to a marketing economics class, where she became convinced to change her pursuit to a marketing degree. She is grateful for professors who focused on her and with whom she remains in touch.

She cites her aunt’s success as a small business owner as well as her mother as inspiration. Additionally, she recognizes a family friend who is a priest as being her mentor and friend who advises her.

Her mother was 23 when she and her husband, Helmy’s father, started their business. Helmy followed suit and ramped up her fledgling business by building her team at the same age. That team focus and acknowledgement of those who have championed her led her to name her agency Tribu, a nod to the Latin word origin tribunal and the Latin translation Gens, meaning tribe. “As a digital agency we are all about human connection – not just sales. We develop stories for our generation, tribe millennials. Ours (agency) is a progressive, digital play area,” she says of her business, which creates digital strategies for various brands.

Now an award-winning agency with a staff of eight and looking to grow, Tribu supports industries as varied as medical, hospitality, government, financial and not-for-profits. Specifically, Tribu develops and implements social media and inbound marketing strategies. “We’ve shifted to a progressive approach designed especially to capture millennials,” says Helmy. That mindset has allowed Tribu to grow beyond local and regional clients to include international accounts in Canada and Brazil.

Quick to recognize that many things play into her success, including working closely with her husband, Jason, who oversees finance, accounting and business development, Helmy has much affection for her hometown. San Antonio, she says, “offers an amazing business climate. I think San Antonio has shown lots of progression and does a great job being Texas-business friendly. There’s diversity, and it’s constantly improving. I’m lucky this is my passion.”