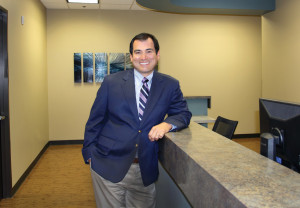 Dr. Delio Ortegon is a board-certified plastic surgeon and the founder of the San Antonio Cosmetic Surgery clinic in the new Christus Santa Rosa hospital complex near Sea World. After getting a degree in microbiology from the University of Texas at Austin, he attended medical school in San Antonio, and then completed both his general surgery and plastic-and-reconstructive surgery residencies at the University Hospital. A native of Eden, TX, Dr. Ortegon is also the chief of the Plastic Surgery Division at the Christus Santa Rosa Westover Hills Hospital and a clinical faculty member in the department of plastic surgery at the Health Science Center. His clinical research work has been published in a number of professional journals, such as Microsurgery; the Journal of Vascular and Interventional Radiology; the Journal of Trauma, Infection and Critical Care, and the Journal of Surgical Research. He is a member of the American Society of Plastic Surgeons and a Fellow of the American College of Surgeons.

Surgeries performed by Dr. Ortegon and his associate, Dr. Michael Baumholtz, range from rhinoplasty (nose jobs) and face-lifts to a number of body-beautifying operations in which Dr. Ortegon personally specializes.

Originally you wanted to be a family practice doctor. What made you change your mind?
I grew up in a really small town with only two doctors. And since they knew I had an interest in medicine from a pretty young age, they let me go on rounds with them and let me visit their offices, so family medicine was all I really knew. It wasn’t until I got to do my (medical school) third year rotations in various specialties that I found that I wasn’t as interested in primary care as I thought. When I did my first surgical rotation, which happened to be plastic surgery, on my first day I saw a pediatric cleft lip surgery, a breast reconstruction operation and even some cosmetic surgery. So I was exposed to a lot in just the first few days. I decided that something that can offer so much variety is exactly what I wanted to do. I ended up doing seven years of general surgery training and three more years of plastic surgery. I was 36 when I finally finished my training.

That’s a long training period. Was it worth it?
Oh, yes. Every day I do something that I enjoy.

Now your practice offers a number of both surgical and nonsurgical cosmetic options. Which ones are most requested?
The most common surgical procedures that I perform are breast augmentations, tummy tucks, liposuction, breast-lifts and breast reductions, and of those, breast augmentation is the most common. There are many A and B cups wanting to be a C cup. Everyone has that preconceived notion that people who want breast augmentation go rather large, and there are certainly some who do, but most women just want to fill out their bathing suit a little better.

Is the tummy tuck part of body contouring?
Yes, it’s a portion of it, but body contouring can involve arm-lifts, thigh-lifts or butt-lifts. For tummy tucks we see a lot of patients who are mothers; in fact we refer to these operations as Mommy Makeovers. The other subset of patients seeking body contouring comprises people who have lost a massive amount of weight. They typically have a great deal of excess skin that we need to deal with. Probably 15 percent of our patients are in this group. I think the best body-contouring involves tightening up stomach muscles that have been stretched due to pregnancy or weight gain, doing liposuction to the abdomen and removing the excess skin, so I often perform lipo and a tummy tuck at the same time.

How about nonsurgical procedures?
Nonsurgical procedures for the body would be things like Coolsculpting, for instance. It uses a device that freezes the fat cells which then die off and are slowly reabsorbed and removed by the liver. The device fits over fat spots like love handles or wherever there may be a little extra fat.

Does it work on cellulite?
It does not work well on cellulite. There are better treatments for cellulite, and I am really excited about one called ThermiSmooth. We are part of an FDA study investigating how effective the Thermi Smooth250 machine is on skin laxity and cellulite. So far we have enrolled just six patients (for the study), and we have been very happy with the early results. We hope the study will end in a few months, and we should have data by the end of the summer. This procedure uses a small heated appliance like a pad that is applied to the cellulite-afflicted area. It feels like a hot-stone massage. It’s actually quite comfortable. Patients often fall asleep during the treatment. If this works, it will really explode. So many women have cellulite. You can be really fit and still have cellulite. If we can get that and stretch marks to go away, I’ll retire! (chuckles)

Is ThermiTight similar to ThermiSmooth?
Yes, but it’s a minimally invasive procedure, used for skin tightening. We make a tiny incision and introduce a small probe that uses radio frequency waves to gently heat the under surface of the skin and the deep fatty layers. This induces the production of collagen and elastin that ultimately results in skin tightening. It’s mostly used on the face, but I have used it on arms, tummies and inner thighs. We can do it in the office without sedation.

Tell us what’s new in nonsurgical facial
skin rejuvenation.
Fillers are quite popular because the versatility of fillers has expanded, and our knowledge of how to use them has improved. We are no longer just filling the wrinkles; we are volumizing the entire face. For instance, the filler Juviderm Voluma is specifically designed for mid-face filling, to restore that youthful roundness. Botox remains very popular. We also have an aesthetician on staff who does a lot of microdermabrasion, peels and laser skin rejuvenation.

You have received a number of awards during your career. Could you mention a couple that you are especially proud of?
Last year I was designated as one of Texas Top Docs (through peer voting; published in Texas Monthly). The other one that I am really proud of happened while I was a resident. I won the Service Star Award from the VA, which is one of the highest awards the VA gives to its civilian employees. It was given to me for the simplest gesture of helping a veteran in the hallway who looked like he needed help. I made sure he got into the triage area and into the ER and made sure he was taken care of. And he wrote a letter to the VA about it. It was a nice validation of the day-to-day things that we do that usually go unrecognized.

What advice would you give to a person considering plastic surgery?

The most common question that I get is “Is this worth doing?”
My answer is always the same: If this truly bothers you – you personally, not your spouse, your cousin or your sister — then, of course, it’s worth doing. And it doesn’t matter whether it’s a big operation like a tummy tuck or some simple skin care thing…. It’s also important to seek a physician who is certified by the American Board of Plastic Surgery. There are other similar-sounding board names, so one should be careful.