Cheryl Ladd: A Star Among Us 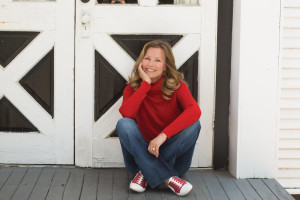 When Cheryl Ladd goes grocery shopping in Boerne, she’s usually dressed in jeans and a T-shirt, hoping to blend with the crowd. Invariably, though, someone stops her with “Does anyone tell you you look a lot like Cheryl Ladd?” She tries to deflect further inquiry with a lighthearted response like “Yeah … I get that a lot,” but her real identity is often revealed, provoking excited chitchat or a request for a quick photo. “Generally, people have been warm and welcoming, but also giving me my space,” says Ladd.  “A lot of celebrity has to do with how you deal with it. I am a friendly person who always tries to be kind.”

Yes, we are talking about that Cheryl Ladd, the veteran film and TV actress who became an overnight star after joining the cast of the popular TV show Charlie’s Angels back in the late ‘70s.  And yes, she does go to H-E-B these days like the rest of us because Ladd and her husband, producer Brian Russell, are now residents of the picturesque Hill Country town just north of San Antonio. So many of her immediate family members relocated to this area in the past 20 years — including her mother, sister and brother — that it was only natural for the Russells to want to join them. In addition, Russell’s daughter and her family live in Austin. “We thought we were going to like it here, but we actually love it,” says the actress.

Because the couple is in the process of building a new residence, the mayor’s wife, Carol Schultz, has graciously agreed to make her home available for our interview. A slim, petite woman, Ladd is again clad simply in jeans and T-shirt, wearing hardly any visible makeup. She can pull together the glamorous look when she needs to, she explains, but 5-inch heels are “so torturous” to wear. Though the glam act is fun, “I am glad I don’t have to do it all the time,” she admits. And she’s definitely not playing the inaccessible diva part. Through her sister, Ladd discovered the Boerne Performing Arts organization and promptly volunteered to serve on the board. Only four years old, the group brings to town a variety of well-known performing artists such as Australian phenom The Ten Tenors, the TAO Taiko Drummers from Japan and the StepCrew, a virtuosic percussive dance ensemble.  The 2015 season will include the Canadian Brass, the New Shanghai Circus and Neil Berg’s 102 Years of Broadway. Ladd was impressed by the quality of the shows as well as by the town’s enthusiastic response to having something like that in their midst: “What I like about Boerne Performing Arts is that the whole community is involved with it and also that they are trying to include young artists from local schools to help out backstage and thus get up close and personal with the professionals who do this for a living. That can be very helpful.”

“The whole community” encompasses the Boerne Chamber of Commerce, the Convention and Visitors Bureau, Boerne Kendall County Economic Development Corporation, the city and the school district, which often gets free performances for its students.

While Hill Country life agrees with her, Ladd has no intention of abandoning her acting career anytime soon. It makes her happy that her 2014 movie The Perfect Wave has just been released on DVD, Blu Ray and other home video platforms, making it available to people across the United States. A true story about love in its many forms, including God’s love, the film features Ladd as the mother of an avid surfer who, while pursuing surfing adventures, runs into serious trouble and eventually undergoes a spiritual transformation. The movie was an answer to her prayers, notes the actress. While still living in California, she used to walk her dog every morning, using the time to pray and “talk to the Lord.” At the time, the scripts she was receiving for review did not appeal to her one bit, mostly dark “icky” themes. She confided to God that she longed to do something that would bring people closer to Him. “Within weeks this script arrived, giving me goose bumps. I said ‘yes’ immediately,” she recalls. The filming in Cape Town, South Africa, was “one of the greatest experiences of my life. The feeling on the set was extraordinary because we prayed together every day asking God for guidance, and each day a couple from a local church came to pray for us. This had never happened to me before. It was very inspirational.” 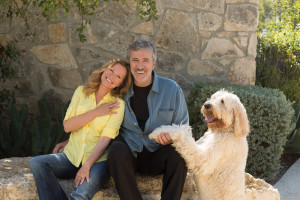 “I knew from the age of 3 or 4 that music and dance were where my soul lived, where my joy was. My mother jokes that I had my bags packed (to go to L.A.) since I was a child,” says the actress, who started her career as a singer and has recorded a number of albums. At 7, she won a talent contest in her small South Dakota town by singing a song about enjoying a playground swing. It was not the winning, however, that she was after but the sheer pleasure of singing the tune that made her feel like she’s actually on a swing. After high school, the budding performer promptly headed to California with her high school jazz trio Music Shop Band to seek fame and fortune. Though the group fell apart, Cheryl Stoppelmoor, as she was named back then, stayed and started getting small roles in films and on TV. During that time, she also married David Ladd, the son of legendary actor Alan Ladd, and had her only child, Jordan, in 1975. Then came Charlie’s Angels, which changed her life forever.

Ironically, the young actress was at first reluctant to join the cast of the widely popular show that Farrah Fawcett had just left after a single year. Replacing Fawcett was a tall order, and she didn’t want to put herself “in that place.” Rejected, producer Aaron Spelling auditioned more than 100 other women with little success. Ladd finally relented when Spelling agreed to create a new character for her — Kris Munroe, Fawcett’s character’s kid sister, who would be funny and would be allowed “to make mistakes.” Together the two figured out who Kris Munroe was going to be. The ratings went up, and Ladd became famous. Not surprisingly, she counts her four years with the show as one of the highlights of her 40-year career. Though she appeared in a number of other TV shows and many movies, the other highlights she mentions are her six-month Broadway stint as Annie Oakley in Annie Get Your Gun; the Grace Kelly TV biopic that she produced with Russell (re-released on DVD in 2012), and the aforementioned filming of The Perfect Wave.

“This is what I say to young people about sudden fame,” she says, “A week before Charlie’s Angels no one cared about what I did, what I ate or how I dressed. A week later, everything I did suddenly became interesting.  It’s a big change. Yes, it’s exhilarating; you are flying down that hill at 80 miles per hour, but it’s easy to lose touch with who you really are.”

Happily married to Russell for 33 years, the charming, youthful-looking actress credits common values and compatible ideas about marriage for their happiness. Her husband put it best when he said, “We look at life through the same window.” She sensed that early on while they were still dating. One day when he wasn’t returning her calls as promptly as she expected, she finally left a more strongly phrased message, wondering if he was OK. Russell called back and, sounding excited, prompted her to rush to his place. She found him sitting on the couch, reading a book. He then proceeded to tear out 35 pages, handing them over to her to read, eager to share this wonderful story with his girlfriend. The book was Shogun, and the two spent the rest of the day reading together in this way, exchanging only brief emotional reactions to what they were reading. “That was one of the most romantic dates I have ever had,” says Ladd. And her love has only grown deeper over the years. “It’s strangely exciting to be so deeply connected with another human being,” she adds. “I am still crazy about him. He’s a good man.” More recently, her Scottish-born husband went one step further in his love of literature by deciding to write a book himself. Ladd is eager to share that news. Called Scribe, the novel follows a Hollywood power couple as they settle in a small Scottish town for the summer, only to find themselves embroiled in a sinister and life-threatening vortex of events. 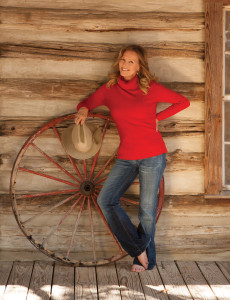 Ladd, too, has written a book, Token Chick: A Woman’s Guide to Golfing with the Boys, an autobiographical account of her experiences with golf, a game she took up as an adult and loves dearly. Every year, the actress teams up with actor John O’Hurley to host a celebrity golf tournament to raise funds for ChildHelp USA, a national nonprofit dedicated to child abuse prevention and treatment.  Her humanitarian efforts on behalf of abused children started decades ago after she read a disturbing news story on the subject. She remembers thinking, How can something like that even exist in our country?  To increase awareness of the problem — which at the time was not as widely recognized as it is today — in 1979 she developed and starred in the ABC-TV film When She was Bad in which she portrayed a child abuser, a risky thing for an “Angel” to do. Once settled in the new house — after Christmas, when the Russells hope to gather the entire family in their home — Ladd may contemplate writing another book, this time about her faith journey.

“I feel my faith far more deeply now. It’s essential to me,“ she observes thoughtfully. “At the height of my success I was the least happy because I was the farthest from God. The closer to God I am, the happier I am.” 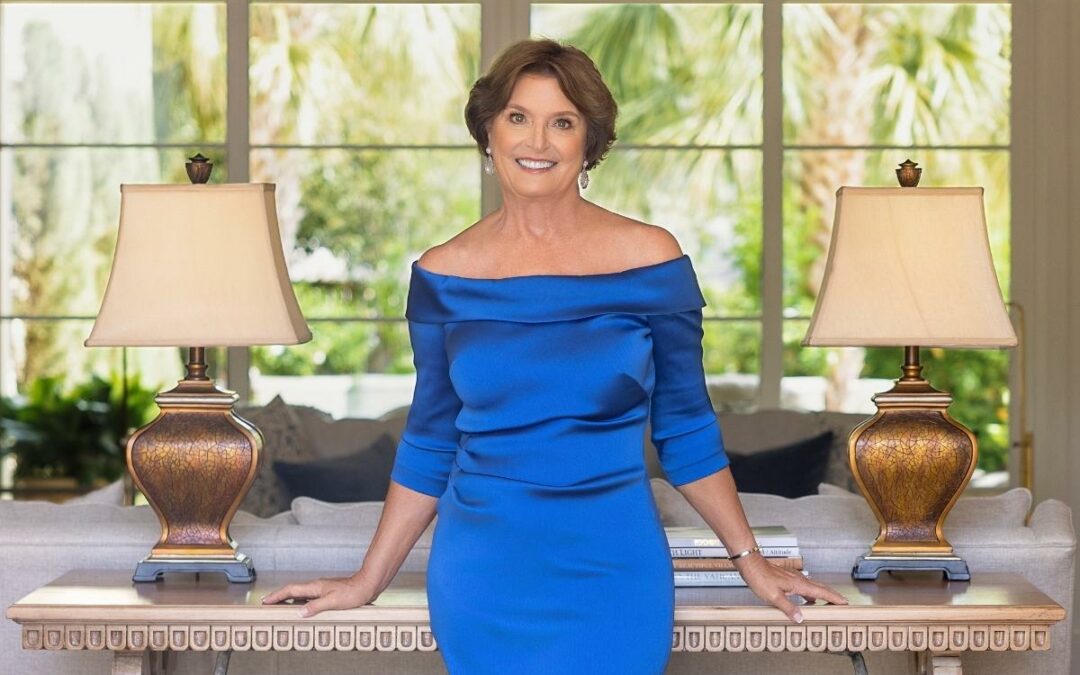 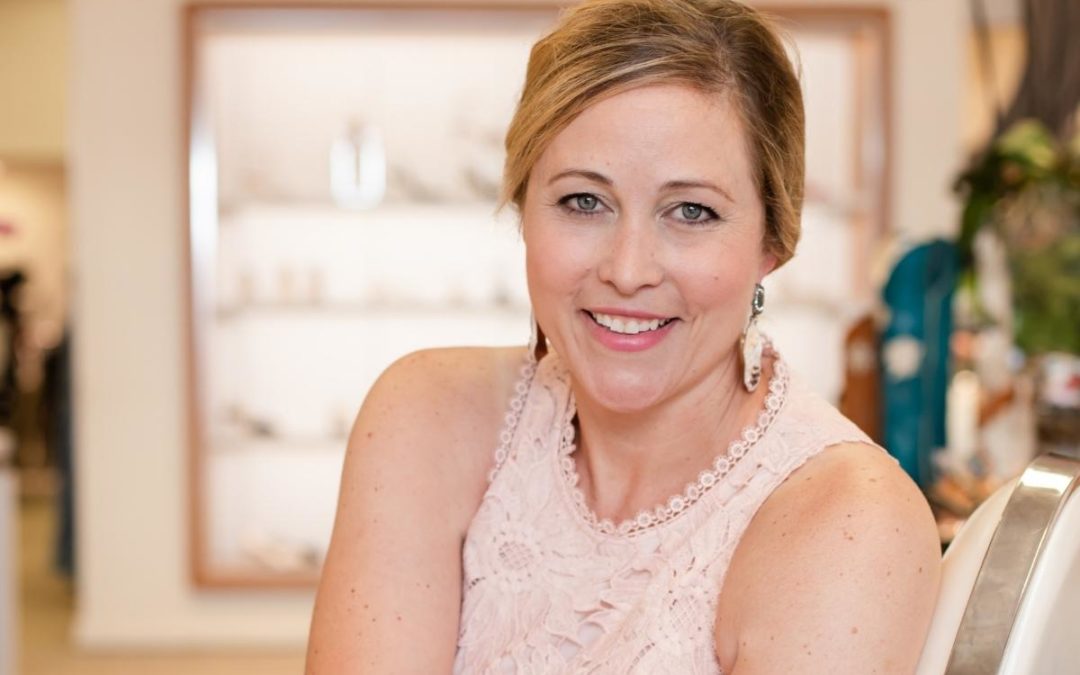