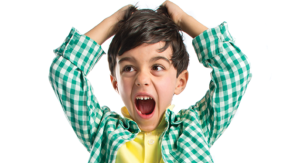 There is a scene in one of my favorite holiday movies, A Christmas Story, where Ralphie utters “the queen mother of dirty words” and gets his mouth washed out with soap. While the scene is hilarious, the situation isn’t quite as funny when it happens in your own home. Fortunately, neither of my middle school-aged boys has (to my knowledge) said “the big one,” but they have recently begun experimenting with what I call the “borderline” words. You know the ones I mean. In the black and white world of profanity, they are the gray area. The ones that, while they might not be punishable by soap in the mouth, are surely worthy of what my boys call “the look.”
“That sucks,” “pissed off,” and “freakin’” are a few of the terms that have been tried on for size in my home, along with innocuous but still slightly offensive slang for body parts. So where and when do you draw the line? For mom Karen Zander, the rules are hard and fast. “There are no ‘gray’ words in our house,” she says firmly. “If you wouldn’t use the word in conversation with your grandparents, then it’s not part of our family’s vocabulary.”

Other moms are a little more relaxed in their approach. “My 7-year-old son has just started to test it out a little,” says Jessica Baker. “I’ve told him that things kids say to each other are not always things that they should say to adults. I will probably take the same stance with true curse words in that they are a part of life, but not in front of your mom.”

Why they do it
The reason children use profanity or offensive language isn’t that different from the reasons why adults do it. In fact, where do you think many of them learned it?
“I feel like, for primary-aged children, they use bad language because it has been modeled for them,” says child development specialist and former primary school counselor Lindsey Harvey. She explains that if the kids hear their parents using profanity among friends and it elicits a laugh, then the kids learn that the word is “funny” and repeat it in the hopes of getting the same response. “They don’t understand that it is a ‘bad’ word,” she explains. As children get older, proper modeling becomes even more important. Why? Because now the child recognizes that these words are “bad,” and if they are part of the parents’ vocabulary, then it becomes next to impossible to enforce consequences for using them.

“If these words are the common language in the home, then how can a teen be punished when the standard is so different for them?” questions Harvey. “If the parent expects the child to change, then the parent must be willing to change too.”

“But I never swear in front of my children,” is a common refrain from many parents. Well, good for you! But do you let them watch television? PG-13 movies? Listen to the radio? “What’s OK to air on television and other media is so much different today than it was when we were kids,” says Chris Bertha, assistant head of school at St. Luke’s Episcopal School. “Today’s kids are exposed to so many different things, and they begin to mimic what they hear to try and see what fits them.”
And let’s not forget peer pressure. You can limit what your children are exposed to, you can make sure that every word that comes out of your own mouth is pure, but you can’t be with them every second. They are going to hear things from and repeat things to one another in an effort to be cool and fit in. Furthermore, the words that might have resulted in a phone call to mom when we were in school are often overlooked in today’s classrooms as simply part of the teen lexicon.
“We don’t have a list of acceptable and unacceptable words,” explains Bertha. “It really depends on context, time and place.” Like many private schools, however, St. Luke’s has a code of conduct to which students are expected to adhere. The students sign a pledge to be courteous and cooperative at all times, and that encompasses their interactions with faculty, staff and one another. Depending on the circumstances or the word used, improper language could be considered a violation of that pledge and result in appropriate action.

How to handle it
So what is appropriate action? When it comes to offensive language, it can be largely dependent upon age, circumstance, place and, of course, the word itself. For example, a group of students talking in the hallway about being “pissed off” is different from a student telling a teacher or his mother the same thing.
Bertha says that if a student is overheard using offensive language in the hallways among his peers, the hope is that a nearby adult will address it. Depending on the word and the context, addressing it could include anything from a reprimand to a phone call to the parents to a form of detention. Christi Wilbur, director of pupil personnel services with North East ISD, says that the approach to bad language when it is used in elementary school is to work with the child to teach him that the word is not appropriate and to find out if there is an underlying cause for the behavior. At the secondary level the student should know which words are not acceptable, and again the teachers, counselors and administrators will attempt to work with the child and the parent or guardian to address the behavior. In both cases, continuous use of offensive language can carry a punishment ranging from a warning to detention, suspension, or in the worst cases, placement at the alternative school.

“North East ISD does not approve of bad language in schools, and we do not ignore the language,” says Wilbur. “Rather, we try to address it an early age.”
When the language is happening at home rather than at school, there are many ways to handle it. First, try talking with your child about her feelings and come up with alternative ways of expressing them. “I am always reminding my children about self-respect, respecting their elders and having their intelligence speak through their vocabulary,” says Dolores Valles, mom of a 17- and a 10-year-old. Mom of four Sarah Bowland concurs: “I tell my children that there are much more effective words to use to get their point across.” If the bad language continues, consequences are in order and can include writing a letter of apology or their losing age-appropriate privileges.
As Ralphie points out in A Christmas Story, his father “worked in profanity the way other artists might work in oils or clay.” The bottom line? Our children hang on our every word, whether we realize it or not. Make sure they are good ones!