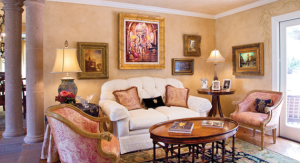 When you’ve spent years living in the hills of Austin, where large multiple-level homes are built on the edges of cliffs, San Antonio can seem a little flat. For one developer and homeowner, the opportunity to acquire a beautiful tract of pristine hillside in Stone Oak was a perfect draw.
She and her team made the improvements for the gated community of Champions Run and realized very quickly that individuals wanted the opportunity to enjoy city and Hill Country views. “Though there was interest with several lots sold, homeowners in San Antonio were not used to building homes on hillsides, as they do in Austin,” she says. “So I decided to design a home that showcased the city view.”

A model home
She designed the house on a napkin and deliberately chose a lot that would require several levels and provide a beautiful view of San Antonio and the Hill Country. She made changes as construction occurred, changing a few details as she went. “I chose designs, materials and colors that carried a California influence,” she says. “I love California home design, and I wanted to establish it here. I thought it would be nice to see new materials and colors in this part of the city.” The finished home is a three-level Mediterranean latte-colored stucco with a brown tile roof. Cantera stone balustrades line the balcony and porch. Three landings lead from the driveway to the front door, a custom-made glass marvel. “I love glass prisms, the way the light passes through and brings color to walls and floors. I wanted the front door to be a statement about things I like, so the front door is made of strips of glass that have a prismatic effect,” she explains.

The flooring in the entry hall is of Cantera stone. “I used Cantera on the outside decks and brought it into the house as a way to bring the outside in,” she says. “It’s very easy to care for and worked out well. I’ve lived in this house nearly 20 years, and it looks as beautiful as the day it was installed,” says the homeowner. To the left of the entry is a cozy study with a bright view of the neighborhood. Built-in bookshelves line one wall, providing storage for reference books and personal items. The star of the room is the chandelier, a combination of modern and traditional styles.
“I love chandeliers,” the homeowner says. “The right chandeliers can make a house.” 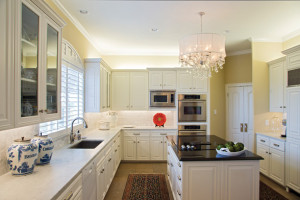 Formal living and dining
Beside the study is the formal dining room, open to the entry hall. “I know the trend is going away from the formal dining room, but I use mine often, as I enjoy getting the family together,” she says. It’s easy to imagine an intimate dinner party here, with a fire flaming in the wood-burning fireplace and light sparkling from the large glass and wrought-iron chandelier. Built-in shelves display keepsakes. Several large floral paintings in decorative frames provide accent colors for the neutral wall color. Cantera stone columns separate the dining room from the formal living room, where a small sparkling chandelier hangs from the center of the coffered ceiling. “This is my room for conversation,” she says. “There’s no television here, just comfortable seating for an evening’s discussion.”

Backyard oasis
French doors lead from the living room to the back patio, an oasis in dappled sunshine. The outdoor kitchen and seating make for fun entertaining, and the homeowner’s grandchildren enjoy the pool and the playscape perched in the grass.“I love water,” she says. “The sound of it is so relaxing. I put three scuppers in the pool so I could hear the water in the background when I’m out here. This is a very relaxing, peaceful, private area to enjoy being outside.”
The sunny kitchen has seen one renovation since it was built. “My children and I had lived here a number of years when I decided it was time for an update,” the homeowner says. She installed stainless steel appliances, marble countertops and backsplash and a large chandelier. She replaced some of the cabinet fronts with glass. “The cabinetry work was custom, so there was no reason to replace it,” she says. “The glass fronts were a way to change things up.”
The kitchen flows into the breakfast room, where a large round table with seating for eight is the center of attention. “Round tables are my favorite,” she says. “They lend themselves well to conversation. No one is left out because they are at the wrong end of the table.” The coral chairs with their neutral seats provide a colorful contrast to the brown table. The room’s best asset is the view of the hillside beyond.
Three steps up from the breakfast room is a transitional space that is used to display pressed botanical prints by Austin artists Lauren Lachance and Eduardo Benitez. “This husband and wife go all over the world to find unusual leaves to press,” she says. “I think they provide a natural complement to the light and materials in my house.” 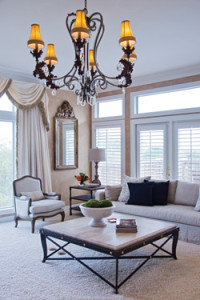 Fun and games in family room
The game room has a spectacular picture window with a marvelous view of the Hill Country. The room is tastefully furnished with a sofa and chairs that offer either a view of the window or the giant flat screen television at the other side of the room. The large wood-burning fireplace provides warmth on chilly evenings. “This is my family room,” the homeowner says. “We gather here to watch movies and hang out. It’s a relaxed environment for children and adults alike.” On the kitchen level is the guest wing, with three guest rooms with en suite baths. The homeowner uses one of the rooms as an exercise studio, complete with weights and elliptical equipment. “I use the elliptical machine, but sometimes I wonder if I don’t get a better workout climbing all these stairs,” she laughs. The third bedroom is larger than the other two. “I designed the home so it would have two master suites, this one and the one upstairs,” she says. “It is always possible that whoever owned this house would have a need for a master suite or mother-in-law suite downstairs.”
Down a staircase from the guest level is the three-car garage with two large storage rooms.

Private aerie
The upstairs master suite is a private aerie. Entry is gained through a small sitting room, where the homeowner reads and enjoys the view through plantation shutters. French doors open onto a balcony facing south, with the San Antonio panorama on the skyline. The room is simply furnished, with a king-sized bed and upholstered headboard. Bombé chests flank the bed, and a large armoire is opposite. A large flat-screen television is mounted next to the armoire. The fireplace provides warmth and comfort during evenings when cold winds whistle down the canyon. A portrait of the homeowner and her children hangs over the fireplace.
The spacious master bath features a Jacuzzi tub beneath a wide window offering a fabulous view. The mirrored walls are practical as well as pretty.

The walk-in closet is a model of organization, with bi-level racks and shelves for shoes. Lots of shoes. The way the space is arranged allows her to organize her clothes and accessories by color or style, if she chooses. “A large closet is a necessity,” she says. “You can never have too much storage.” What started out as a model home ended up being the homeowner’s dream, she says. “I love the house, the views, the serenity of it all. It meets my needs and is just my taste!”