Suzanne Wade – Groceries Are Her Business 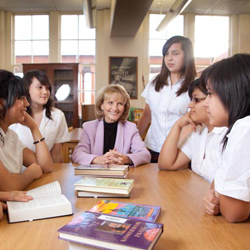 When Suzanne Wade visits an H-E-B store, she’s apt to be greeted several times a visit – even when the store is a hundred or more miles from home. As president of H-E-B’s San Antonio Food and Drug Division, she’s in charge of all retail sales for the company except for its Central Market and Houston area stores. That means Wade oversees operation of more than 200 stores from north of Austin to deepest South Texas, all of which she visits regularly, wearing the familiar blue-and-white H-E-B partner’s nametag that identifies her as “SUZANNE.”

Not only do store employees recognize her, but so do customers who have seen her appearances in H-E-B’s TV commercials. When they spot her in a store, Wade says, they often say, “I didn’t know there was a real Suzanne.” In fact, sometimes it seems as if there ought to be more than one of the busy executive, who is based at H-E-B’s downtown headquarters. She attends high-level corporate meetings as well as new-store opening celebrations, while serving on nonprofit boards and maintaining a personal life. When Wade became “a first-time bride at age 48,” she says, “my husband and his two daughters and I all got along so well, (but) I wondered, ‘How am I going to juggle all this?’” Luckily, she says, her husband, Dick Wade – a business owner and entrepreneur – “is very understanding. He’s a people person, too, and when he goes to store grand openings with me, he wears his own H-E-B badge.” It also helps that the grocery chain is “a big company in a relatively small geographical area,” says Wade. “I can be anywhere and back in a day.” Always a busy person, by her own description, Wade also has been in retail nearly her whole life. When she was growing up in Oklahoma, her father had a gasoline and retail business, “where he ‘allowed’ my older brother and me to work.” While still in high school, she was doing bookkeeping and accounting, and also worked in a women’s clothing store through college at Oklahoma State University, where she earned a B.S. in marketing. After graduating, she taught fashion merchandising for a few years in an Oklahoma City high school before returning to school to earn an MBA from the University of Oklahoma. “I had an ambition to own my own clothing store,” says Wade, “but then I got involved with corporate America and never looked back.”

That journey started with Wal-Mart at the discount retailer’s Bentonville, Ark., headquarters, where she worked 11 years in human resources, followed by eight years as senior vice president of Sam’s Clubs, responsible for marketing, distribution and general management of Wal-Mart’s warehouse membership stores. Part of her job was checking out the competition, and when Wade visited H-E-B, she says, “I was impressed when I’d see badges (on employees) that would say 25 or 30 years (of service to the company).” What she’d seen of H-E-B stores helped her decide to accept when the chain recruited her 14 years ago. “I fell in love with the company and the city and I’ve been here ever since,” says Wade. An H-E-B colleague even introduced her to her husband, then his next-door neighbor, “so San Antonio has been very good to me,” she says. Wade started at H-E-B in sales and advertising, and it was on her watch that the chain launched the long-running “Go Home a Hero” campaign. “That slogan was focused on the shopper and the rewards they would get in savings and extra appreciation from their families,” she says. “The ads were based on scenarios people told us about, when their husbands or children opened the door on a full refrigerator. That gave the shopper a feeling of accomplishment.” 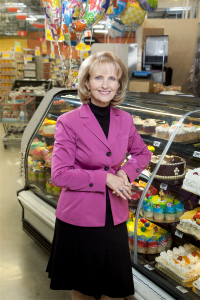 Wade also has had responsibility for H-E-B’s own products, those that bear the company’s name or the Hill Country Fare brand. During that time, she was part of the effort to develop Creamy Creations ice cream and was one of a small group of executives who had to taste-test the product every week. “Someone had to do it,” she says, smiling. For the past six years, she has been in her present position, overseeing stores in a territory that includes Austin, Burleson, Laredo, Waco and Waxahachie, as well as the Rio Grande Valley and West Texas. She’s on the road and in the stores two or three days a week, “looking at how we’re presenting merchandise and how we’re supporting our stores.” By visiting with employees, Wade says, “I get a feel for morale and who’s ready to move up to a higher level.” Though it’s a tough schedule, visiting stores is one of her favorite parts of the job. “I’m a people person more than an office person,” she says. And Wade learns a lot from her travels. The grocery business, she says, “operates on very thin margins. At H-E-B, we’re blessed with volume, but it’s also important to offer quality products.” Stock in the produce departments, for instance, “turns several times a week, so the customer gets a better product and will buy more.” The company also pays close attention to inventory levels and expenses, but above all, Wade says, “We have to be the best place to shop.” To that end, she looks at each store for cleanliness, brightness and service and “an overall feeling that keeps people coming back frequently.”

That doesn’t mean that all stores have to be exactly alike. Different stores carry different assortments of merchandise, whether it’s one near the University of Texas at San Antonio that carries student-friendly stock or another across from the Barshop Jewish Community Center that offers kosher food, chosen with the help of a rabbi. “We take the time to consult with people,” Wade says. As the dominant local grocer, H-E-B, she says, “is unique not only in San Antonio but in the retail business.” Now 105 years old, “The company has weathered wars, depression and difficult political times,” says Wade. “We’ve been through a lot together.” On business trips and elsewhere, she says, “I meet people who have had a lifelong relationship with the company, who were taken there as children and now shop there themselves. I’ve even heard from people who say their children learned to say ‘H-E-B’ before they learned their ABCs.” In all her years with the company, Wade has yet to meet with a less-than-positive reaction when people hear where she works. “Sometimes, they’ll say, ‘Why did you move my stuff around?’ or ask why we don’t carry a certain item,” she says. From total strangers to personal acquaintances, however, people want to talk to Wade about what’s going on at what they often refer to as “my H-E-B,” the neighborhood store where they shop most often. A good friend once called her at 9:30 p.m. to tell her about a teenage employee who had been particularly helpful and courteous about looking for a hard-to-find item; Wade waited until the next day to relay the praise to the store manager.

“Food is so personal,” she says. “It accounts for a large part of people’s discretionary income, we need it day-to-day, and it’s also part of every celebration.” As a female executive, Wade believes she contributes “an important perspective on the shopping experience.” Since she is just over 5 feet tall, the height of merchandise is important to her; along with aisle width, that’s something often discussed in store-planning meetings. At corporate headquarters, however, Wade is one of 12 female executives in key positions, including treasurer, general counsel, senior vice president of human resources and the heads of customer service, own brands, H-E-B Plus stores and financial planning. There are also many female store managers, she says, who “started with us while in or just out of college.” H-E-B, says Wade, “has a strong diversity initiative and makes an effort to promote from within. Many of our officers grew up with the company or served (previously) as consultants. But first and foremost, we’re here to recruit talent.” At present, the company is pursuing “a very aggressive program of new stores and remodeling.” During 2010, H-E-B added 13 new stores – “big news in this economy,” says Wade – and plans another 23 to open in 2011, while other stores are slated for extreme makeovers. “Stores wear out, just like everything else,” she says. Though no business is recession-proof, the privately held company “can reinvest our profits in the business,” says Wade. In hard times, people don’t stop buying food. Instead, she says, “They tend to buy less expensive products, particularly in wine and meat. They don’t treat themselves as often, but they may be eating at home more often.”

Outside of work, Wade has been a member of the advisory board of UTSA, the Coordinating Council for United Way Initiatives and the advisory council of the Young Women’s Leadership Academy (YWLA), a public school in the San Antonio Independent School District for girls in grades seven through 12. The Academy, many of whose students come from disadvantaged backgrounds, “is achieving tremendous results,” says Wade, with students taking the SAT college-admission test as early as seventh and eighth grade and receiving impressive scores. All students are required to join the school’s Girl Scout troop, a program that promotes leadership training. A commitment to making the community a better place, she says, is part of the H-E-B Promise, a corporate mission statement. At the same time, each of these causes is something Wade feels a personal connection to. “I’ve always believed in the United Way and how it benefits the whole community,” she says. As a former teacher, she says, “I believe in education as a force to transform lives,” and she was a Girl Scout herself, working her way up from Brownies through the higher levels of the organization. A onetime chair of the American Heart Association’s Go Red for Women luncheon, she says the experience was a perfect fit, personally and professionally. “Women’s heart health is emerging as a big issue, (and) the event advocates exercise and eating well,” Wade says. “I’ve been active my whole life, and H-E-B was a key sponsor at about the time H-E-B was launching our line of Fully Fit products within our Fully Cooked frozen line of entrees.”

Crowded as her schedule is, Wade and her husband usually eat dinner at home, where he does the grilling and she prepares the salad and the vegetables. “I’ve figured it out,” she says, “and putting dinner together at home takes less time than it does to go to a restaurant, order, eat dinner and drive home again.” In a sense, she’s still taking work home. “I buy so much food to experiment with, that even though our daughters are grown and gone, our grocery bill hasn’t gone down,” she says, laughing. Her current favorite among H-E-B products is the own-brand azouki-bean chips, which she bought to serve to friends on a gluten-free diet, “and now we can’t stop eating them.”

To achieve balance and stay healthy, she “stretches the calendar” to get up at 5 a.m. to work out twice a week. “I’ve always been a busy person,” Wade says, laughing. “I’ve got my whole life to sleep — someday.”