They Did It Their Own Way: Lisa and Roberta Morales

At a recent Songwriters Circle at Casbeers, petite singer/songwriter Lisa Morales unleashed such a powerful voice that musician Davin James was prompted to quip, She’s sure got a big voice for such a little girl. Everyone chuckled in agreement. She has the kind of smoky, expressive voice that commands attention not only because it’s strong and resonant but also because it’s a heartfelt sound that yearns to communicate with the listener. You instinctively listen. Lisa is one half of the Sisters Morales, a duo she formed with her sister, Roberta, in 1989. Though Roberta did not take part in the Casbeers event, the siblings usually perform together, often harmonizing seamlessly in a “sinuous and flowing” manner, as one reviewer put it. Talented and versatile, both sisters sing, play the guitar and write their own songs. What’s more, they produce their own CDs (four so far) tour extensively with their band and win a lot of critical praise.

Yet their style is not easily categorized. Elements of country, folk, Americana, rock and Mexican strains can all be heard in their music. So I pose the question to them during our interview at Roberta’s house on a rainy February afternoon: What do you call your style? “Border rock,” says Lisa right away, slapping the table in front of her as though relieved to have a name for it. They must have been asked that question many times. In person, both sisters are charming and open, sharing their life experiences with the same sincerity that comes across in their songs. Their latest album, Talking to the River, is the most representative of where they are right now as individuals and artists, they say. “We are all grown up now, and we like who we are, and this is what we do, explains Lisa. We no longer try to fit into the music business pigeonholes, striving to get that record deal. We have made it on our own terms. When you live life and you have witnessed things, you gain a different perspective. You want to sing about something more substantial than puppy love.”

The moving title track Talking to the River, for instance, is about a woman feeling confused and lost after the loss of a child. Musically, the song alternates between melancholy softness and hymn-like passages to end in an extended bluesy sequence that feels like a sigh of resignation. Another song, World Goes Round, depicts a domestic breakup in a quietly ironic way, both musically and lyrically. And yet another one is about needing peace and some solitude. These are mature themes, life as it is, sung so attractively that you can dance to it, daydream to it or shed a tear or two, depending on your mood. Throughout the 12-track album, the two vocalists get great support from the rest of the band, which includes Lisa’s husband, multi-guitarist David Spencer, and producer Steve Berlin – of Los Lobos – on keyboards.

With the exception of two traditional Spanish language numbers, all the songs were written by either Lisa or Roberta. Each approaches songwriting in her own way, however.

For me the melody comes first, explains Roberta’s A melody just comes into my head and gets louder. I record it and later start working on it, developing it. The lyrics come later. Lisa, on the other hand, works on all elements together. It’s like a stream of consciousness. I just start writing, and melody, lyrics and the whole arrangement emerge. I once dreamed a song. (In the dream) someone else was singing this song. And I went, “Wait a minute! That’s my song!” when I woke up and wrote it. Over the years, their sound has evolved from “more country” to where they are now, but in 2002 they sidestepped into Mexican boleros and rancheras with their third album, Para Gloria, dedicated to their mother, Gloria Morales. Though the duo adopted the romantic style of traditional Mexican love songs for the occasion, they also adapted that style just enough to retain their own signature sound.

The siblings beloved mother died last year, and both are still recovering from that blow. But they have hardly been strangers to heartache and trouble throughout their lives. Raised in a musical family in Tucson, they grew up listening to all genres of music, from classical to rock. Their older brother had a rock band that often practiced in their home, while their concert pianist grandmother taught them piano and music theory for a while. Their own “performing” started when their dad would make them sing with mariachi groups in Mexican restaurants. They took to it. “We had a girl band when we were in grade school” recalls Roberta. “We charged admission in the cafeteria, and we did our own songs.” When their brother, Michael, refused to teach them how to play the guitar, they taught themselves. In junior high, the two girls entertained at a local coffeehouse with one of Michael?s friends and even got on the radio.

But life was not all song and fun. Their parents divorced when they were young, and later their father died tragically when the sisters were in their mid-teens. After he died, I bought a guitar, and I sat in my room and wrote songs all summer, says Lisa. Roberta reacted by turning her back on music altogether. They eventually went their separate ways, with Lisa ending up in Germany, where she linked up with a German C&W group calling itself Emsland Hillbillies. Through them she met Clay Blaker of the Texas Honky-Tonk Band, who convinced her to pursue a music career in Texas. Though he remains relatively unknown by the public, Blaker has since become one of the most respected songwriters in country music. His songs have been recorded by the likes of George Strait, LeAnn Rimes and even Barbra Streisand. “He opened a lot of doors for me,” says Lisa.

Roberta followed her own zigzag path that led her through California where Lisa briefly joined her North Texas, California again, Japan and back to Tucson, where Lisa contacted her about joining her in Houston for a particular project she was working on. They never separated again. To work successfully together, however, they had to establish a new, adult relationship. We decided it was going to be a business, notes Roberta. Despite developing a fan base, landing a record deal proved elusive. And then, just as they were close to signing a deal with RCA, Roberta was diagnosed with cancer on her leg, ?and things fell apart. She underwent five surgeries and struggled through several years of pain and treatment before emerging from that tunnel. Music helped her through the ordeal, but as is often the case, the illness also made her approach her art differently. After I got sick, I really started writing freely, she says.Before that, I was afraid to express myself. But now I want to tell everything. I think I have become a better songwriter.

Based in San Antonio since 2001, the Sisters Morales band is busy pretty much year-round, playing some 100 gigs a year, whether it’s entertaining crowds during Fiesta, rocking with the best at South by Southwest in Austin or hitting the summer festival circuit all over the country. Unlike many musicians, they actually support themselves with their music. During our interview, Lisa also revealed a special bit of good news. She had just found out that Lyle Lovett chose to record one of her songs. That could be a step toward even bigger things.

Would they like to become big stars? Sure, if it happens. We are constantly growing and developing our sound and audiences. We get standing ovations, says Lisa. “Ultimately, what you want is to do what you love and what other people love.” 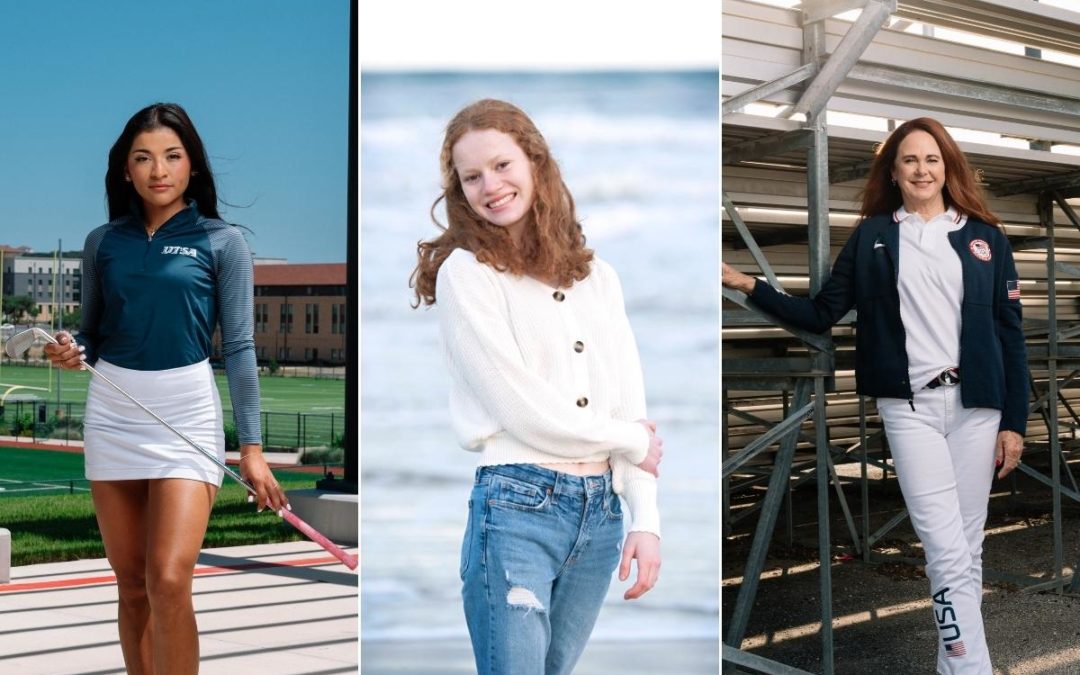 Committed to the Sport By Meredith Kay | Photography by David Teran (Rose Monday & Camryn Carreon) We are all born with unique talents, and realizing what those are at a young age, and nurturing those gifts, can lead to a life-long passion, and often a profession,... 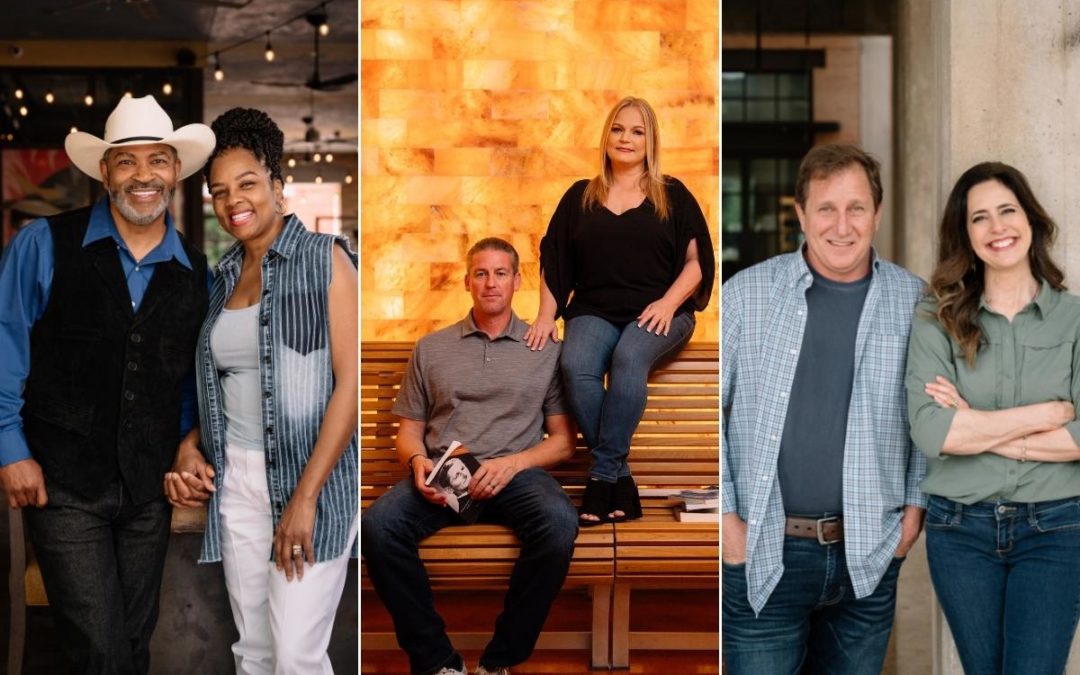 The Balance of the Power Couple By Meredith Kay Photography by David Teran Ask any couple who works together what makes their partnership successful, and you might get many different answers, but for three local San Antonio couples, the common thread that runs through...