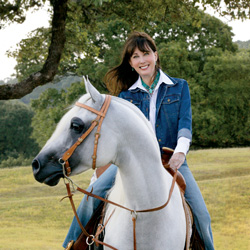 Linda Hummel is a self-confessed overachiever with a rare talent for focusing completely and passionately on whatever she is involved in.

As chief executive officer of the South Texas region of Humana Inc., she is responsible for the overall management and strategic planning for the largest health insurer in San Antonio, Corpus Christi, Laredo and the Rio Grande Valley. She is one of only 15 CEOs or presidents in the company, which serves 230,000 members.

Two years ago, when one of Hummel’s staunchest mentors, her boss Stefen Brueckner, first offered her the CEO position, she turned it down. She was happy where she was. Under her leadership as vice president of commercial sales for Humana’s South Texas operations, her region led the entire company with double-digit sales growth. “I loved the thrill of the sale,” she remembers.

Brueckner, who is in charge of Humana’s marketing operations throughout the country, totally surprised her with his next question: “Do you want to be the orchestra conductor or the violinist?” he asked. Of course, she wanted to be the conductor. “But I thought I was the conductor,” she recalls with amusement.

“I’m so thankful I took the risk,” she says. “It’s a thrill teaching and nurturing the people I brought on. You get so much back from helping and mentoring others and watching them grow. The members of my team are as passionate as I am, and they have the same values. This is so much more gratifying than I ever thought it would be, to have an impact at this level and to touch so many more people. I am enjoying so much of what I’m doing and where I am in life.”

Hummel can scarcely remember a time when she was not working. As an 8-year-old growing up near Rochester, N.Y., she got her first job, cleaning out horses’ stalls, in exchange for riding lessons. “My parents had money and privileges, but I wanted to take care of myself. I’ve always wanted to make my own way,” she explains.

She graduated from Rochester Institute of Technology with a degree in fine and applied arts and moved to San Antonio in the early ’70s. As her career progressed, she was vice president of sales, marketing and business development for First City Bancorporation, director of community services for Trinity University and senior vice president/director of the marketing and retail sales division of San Antonio Savings Association, which at the time was the city’s largest savings and loan association.

She also got married along the way to Charles Hummel.

Three events stand out among all others as pivotal points in her life. The first occurred when she was 20 years old. Her mother, Gloria Tomlinson, who was in her mid-40s, died of ovarian cancer.

“You never think you could lose such a happy, robust, beautiful person as my mother,” Hummel says. Three months later, her only sibling, her younger brother, Craig, also died. The loss of those two beloved people has made her friends and business associates all the more precious to her. It also has made her keenly aware of Humana’s obligation to its members.

“My friendships are so important and so valuable to me. This Humana family is not just a part of my professional life, but also my personal life. They are a great corporate family. My team here is just an awesome group of people,” she says.

Her second major life-changing event, while not so deeply felt, was no less illuminating. “In my 20s through my mid-30s I was so focused on building my career (at San Antonio Savings) that I was putting other things on the back burner,” she recalls. Then, just when everything seemed to be right with her world, the S&L crisis of the 1980s struck, and without warning San Antonio Savings was bought out.

“I never thought I would not have control over my destiny,” she says. “But I learned that one day you can be doing the best job in the world and the next day it’s gone. I realized that the one thing that doesn’t go away is family. That’s when I decided to have a child. When I had my son, Corky, in 1990, that’s when my whole life changed. He became my primary focus. I’m so thankful that all of this happened when I was still young enough to have a child. I feel so sorry that my mother never lived to get to know her only grandson, this wonderful person I have been blessed with.”

Hummel took a hard look at her goals and priorities. “In my personal life, I wasn’t pursuing any passions,” she explains. “If you’re going to be a happy person, you have to have balance. For years I didn’t have a balance in my life.” 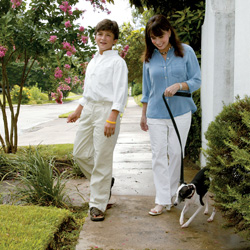 With her customary gung-ho, all-or-nothing attitude, Hummel decided that for the moment she would lay aside the career that had consumed her for more than a decade. She would stay at home with her newborn and be a full-time mom. That lasted for six or seven months before Humana made her an offer she couldn’t refuse.

She returned to the workplace, entrusting her son to a caring, grandmotherly woman who was his nanny during infancy, his sitter as he grew older and his friend now that he is a teen. “I had no family to help out. Without her, it would not have been possible for me to return to work,” Hummel says.

“I can’t imagine my life without a child,” she adds. Although she and her husband were divorced five years ago, both parents remain very involved in their son’s life. “I think it’s very important that divorced parents should stay friends. His father has remarried, and Corky adores Carmen, his stepmother. Between us, we have a well-rounded, happy child who is the light of our lives,” says Hummel.

Corky is an avid golfer and a member of the Junior Professional Golf Association. “Corky and I both love horses. On weekends, when he is not playing golf with his father, we are in Boerne, where we have three Peruvian Paso gaited horses and an Arabian stallion that won a national championship at a showing in halter competition in Louisville, Ky.,” she says. “My son knows my job is demanding. He and I are a team.”

Each year Humana rewards its employees who have met their goals with a resort trip. “Instead of inviting a friend to accompany me, I have always taken my son. He is an integral part of every success I have had,” she emphasizes.

“Looking around at my friends having a life, I saw the importance of balance. I’m still in the process of building and working out my life. I knew when I took on the CEO job that balance was going to be a lot more important if I was going to be an effective leader,” she says.

She became more involved in the community that was so welcoming to Humana at a time when health maintenance organizations were so little understood. She requires that all the members of her team also get involved in their community.

“My whole mission is to education, especially to improve the health care of women who are so busy taking care of everyone else that they don’t always take care of themselves,” she explains. Hummel chaired the 2003 KLRN Women’s Health Conference and will again serve as chairman of this year’s conference at the Henry B. Gonzalez Convention Center on Sept. 11. She also is putting her considerable energy and enthusiasm into another cause that is dear to her heart. She is chairman of the Leukemia and Lymphoma Society’s 2004 Light the Night Walk that will be held Sept. 25.

She was a charter board member of the North San Antonio Chamber of Commerce and has served as a volunteer on several other boards, including the San Antonio Association of Health Underwriters, the American Cancer Society and the St. Mary’s University advisory board.

Her community involvement was recognized in 2003, when she received the Women’s Corporate Executive Leadership Award from the San Antonio Business Journal.