Living in the Heart of the City

We’ve always been drawn to the energy of what happens downtown,” says local urban dweller Kathy Griesenbeck. She and her attorney husband, Ty, have enjoyed the delights of a spacious condominium overlooking the heart of our city for close to four years.

Urban residents have long hailed the freedom from the responsibilities associated with living in a traditional suburban home. It is a freedom confirmed and heartily welcomed by the Griesenbecks — a busy twosome committed to myriad professional and civic endeavors. Kathy is executive director of the Leukemia and Lymphoma Society.

When the couple sold the Terrell Hills home in which they raised twin daughters, they made a temporary move to an Alamo Heights condominium in The Meridian, where they learned to “appreciate the ability to leave home without much preparation,” explains Kathy.

It was an empty nest transition, she adds, “and a tough jump to make, but once made, it was easy.” Daughter Kristin lives in Little Rock with her husband, Clay Berry. Twin sister Kelly is single, residing in Dallas.

The entire experience of living downtown is exciting by night and by day. “You are in the middle of everything, and it is fascinating to see the people leaving from a night of fun and watch hotel workers head for home,” she elaborates. She lauds easy access to venues such as theaters and the great restaurants “where you can enjoy a wonderful glass of wine and fabulous food within walking distance.”

She adds, “I’m kind of a morning person.” Therefore, it is not unusual to find her on an early exercise walk along the River Walk or sojourning to the King William Historic District. Everything downtown is fresh and pristine of a morning, she explains, as the preparation for the next day commences as early as 10:30 p.m.

The Griesenbecks’ condominium is within the historic Pancoast Building, a site designed in 1880 for A. Pancoast and Sons, Clothing Merchants and Tailors. The building stepped into local history when it lost 15 feet of its façade as Commerce Street was widened in the last century. The façade was reconstructed; a third story was eventually added, and it is there our story commences.

Enter Tom Wright, a developer and pioneer in downtown living in the late 1970s. Kathy relates Wright purchased the Pancoast Building and teamed with San Antonio architect Urby Hightower to create an exquisite living space where the Griesenbecks now live.

Though the space had been empty for some time when they happened on it, Kathy notes, “It was move-in ready, and the color palette is Tom’s and not ours.” Configuration of the entire space could be likened to a large “C,” though that shape is not visually obvious.

In addition to creative use of an unconventional space, the result gives ample room for display of art objects. Kathy never ceases to be amazed at the architectural uniqueness and Hightower’s and Wright’s vision for it. “I just want to know talented people like that and live in the places they create,” she says with enthusiasm.

Walls are buttery cream and pale gray. A darker gray in recessed areas results in a shadow box effect. A “ribbon” of burgundy is painted within narrow recessed areas near ceiling height. A terra cotta column separates the formal living room from a small study where more shades of gray are joined with a touch of sky blue.

Kathy reiterates the selection of colors is not theirs, “but they are a wonderful

backdrop for whatever we put in it.” Floors are black linoleum squares, some of which are inlaid with mother-of-pearl shards. Placed in varying patterns throughout the living space, the tiles are still available, as the Griesenbecks learned when a few replacement tiles were needed. Bedrooms hold Berber carpet, and bath and powder rooms are resplendent in marble.

The architectural mood is contemporary. Recessed light fixtures coupled with halogen track lighting reinforce the feel. So how do the traditional furnishings from the Griesenbecks’ suburban home of some 15 years marry with urban modern? The blend translates to urbane perfection.

“When we left our home, we boiled down to our very favorite things,” says Kathy. It was a move made easier with adult daughters willing to accept furnishings from their childhood home that their parents could no longer use. Smiling, Kathy adds, “It was more an evolution than a plan, and I fell in love again with my things that were always there (in a former home) but looked different in another setting.”

Accessory colors in the formal living room reflect hues in the kilim rug centering the primary conversation area, where two warm neutral chenille sofas face one another. Behind one of the sofas is a longtime favorite of Kathy’s, arustic Americana gateleg dropleaf table.

Centering the sofa area is a glass-top coffee table purchased more than 25 years ago in Laredo. Kathy mentions the adornments on the table’s perimeter are actual Mexican garlic pods dipped in a silvery liquid metal not unlike pewter. “We looked at the table and thought, ‘why would we like that’,” she laughs. It is lovely, and has undoubtedly withstood the test of time. Stacked below is a massive and inviting collection of coffee table books.

The wall adjacent holds an extensive collection of art from Santa Fe and Mexico. Displayed are santos of all sizes, framed retablos on canvas, wood and tin and unframed primitive ex votos on tin.

Overlooking a second seating area in the living room is a LeRoy Nieman serigraph in his signature primary colors.

Ty, whom his wife deems an avid collector, has an enviable potpourri of framed ancient maps hung above a living room console. His primary focus is the area of Germany where they were stationed in the military and where the twins were born. Kathy notes some pages are from atlases created in the 1500s by cartographers in an age when “these gentlemen were not even certain which way was north.” It is an awe-inspiring display, given the era in which the maps were generated. Additional vintage maps show Texas when it was a part of Mexico.

A rooftop deck is seen from the living room and beyond a wall of glass windows and doors. Complete with fireplace and kitchen accoutrements, it was featured in Texas Monthly when Wright was a resident.

“We entertain a lot,” explains Kathy. “Ty loves to cook, and everyone ends up out here.” It draws the crowd that might otherwise migrate to the kitchen during informal social gatherings. In winter, a crackling fire beckons from one corner.

Deck planks are made of a reconstituted wood product by Trek Company Inc. When the intense Texas sun bears down on the urban rooftop, the product does not absorb heat, nor does it splinter. Massive pots hold seasonal blooms and greenery.

Back inside, an informal seating area and an office space are found beyond the living room and at the base of the aforementioned C shape in the condo. A cowhide chaise longue belonged to Ty’s former law partner, the late Joe Elliott. A baker’s rack holds Russian religious icons, and nearby, more primitive ex votos are displayed on a wrought iron plate rack. The office is centered by an altar that once graced a Castroville church and subsequently served as a kitchen island in the Griesenbecks’ Terrell Hills home.

Adjacent to the office is the guest room with privacy found in a folding door secreted within a wall so generous in width that it converts to cabinetry in the guest room and holds a television set. A brilliantly painted console brightens the room dressed in black and cocoa. It was originally a gift to Elliott from a group of friends — one designated for his home in San Miguel.

Built-in book and display cases along the wall lead fromthe informal seating area and through the guest room. They alternate with tall windows, where simple shades bring privacy while holding the early morning sun at bay.

The master suite occupies the center of the C-shaped dwelling. Generous in size, it includes a multi-patterned marble bath, a dressing area flanked by a cedar closet and a conventional closet space behind mirrored doors.

The master bedroom is centered with an iron canopy bed made in Mexico. Old World colors in rich fabrics and subtle patchwork design are worked into the counterpane. A brick wall, original to the building, is opposite a khaki-hued wall where memorabilia and photographs give nod to Ty’s days at Texas A&M, his military service and his position as Witte Museum chairman of the board of trustees. One nostalgic sepia-tone snapshot is Ty’s grandfather in a baseball uniform.

There is an interesting aspect to the bedroom — one certainly desirable in an urban setting. A boudoir door leads to the rooftop deck, and the downtown street sounds intrude immediately as it is opened. As the door closes, there is instant silence. Kathy speculates there must be cork insulation somewhere within the area.

Wall space along the main hallway leading to the dining room and kitchen areas holds art from traditional to contemporary. Treasured etchings by renowned local artist Mary Bonner join the colorful work of Jim Hill. Kathy mentions they purchased some of Hill’s work at a church fair years ago and were astonished to find his art in a California gallery on Rodeo Drive in Beverly Hills. A striking framed indenture, a New Orleans legal document on antiquated paper, also draws the eye.

Kathy explains the foundation for their art collection is initially early marriage “purchase of things we liked.” A focus developed when Ty’s military service took them to Germany following law school. She cited the many wonderful things one finds when exposed to travel throughout the world.

The formal dining room and kitchen spaces are delineated by three rectangular terra cotta columns that transition to storage space so cleverly concealed one would have never guessed the surprise within. A truly massive traditional bookcase stands at the wall opposite the dining room suite with a contemporary feel.

The kitchen cabinetry, along with generous display shelves, combines black with blond, complemented by a sleek black granite island and countertops. The ceiling is open, revealing industrial ductwork painted a very dark brown. Large beams span the area, lending a strong architectural mood apropos of a building that commenced as a commercial and even an industrial space more than a century ago.

Below, the bustle of the inner city continues 24 hours a day. “The street is never empty, and it is the safest quadrant in the city,” Kathy boasts. She contends there is a misconception regarding the safety aspect of downtown living. “I feel safer here than in a neighborhood,” she smiles contentedly. 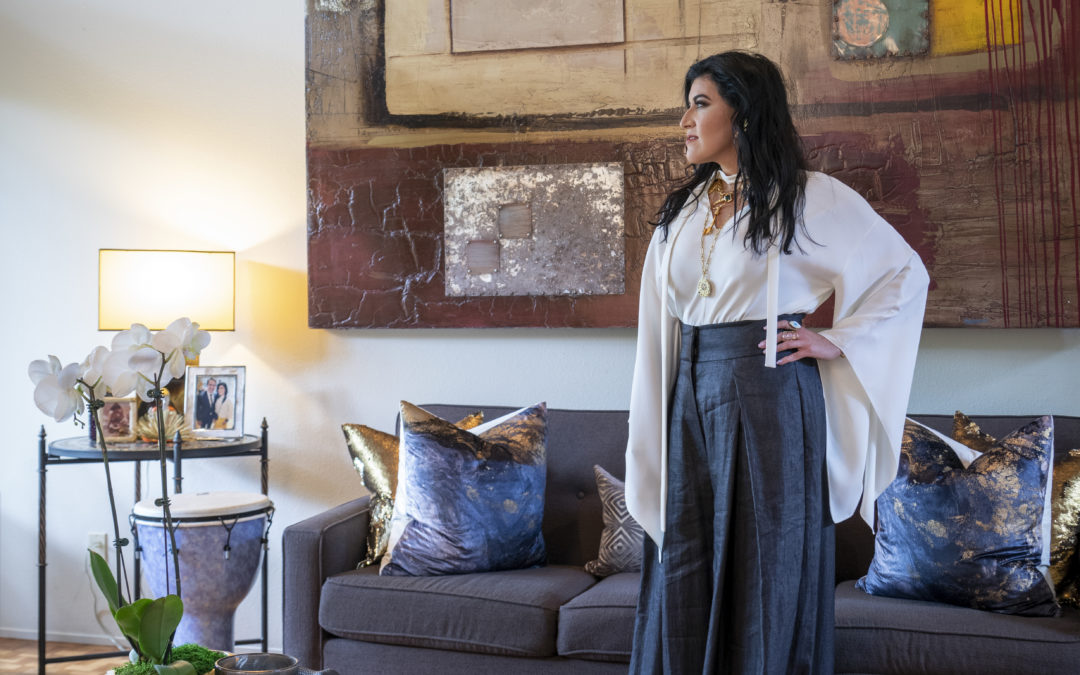 Fashionista's Home Reflects Her Bold Personal Style By Steve Bennett Photography by Al Rendon Dismantle the word lifestyle into its two basic components, and you have a pretty good impression of Xitlalt Herrera. For Herrera, Life = Style and Style = Life. Tall and... 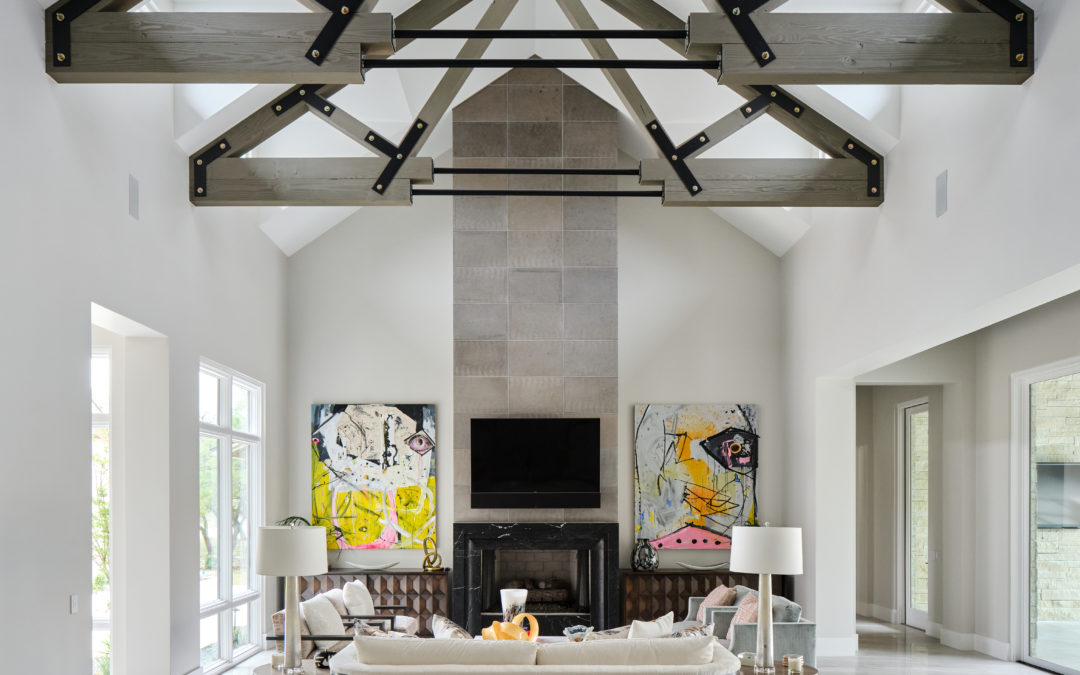 At Home: A Restarter Home

A Restarter Home San Antonio Family Bulldozes Their Old House to Build a Dream Home By Steve Bennett Photography by Matthew Niemann When a Shavano Park couple decided to remodel their aging house, it didn't take long to realize that for a comparable cost, they could... 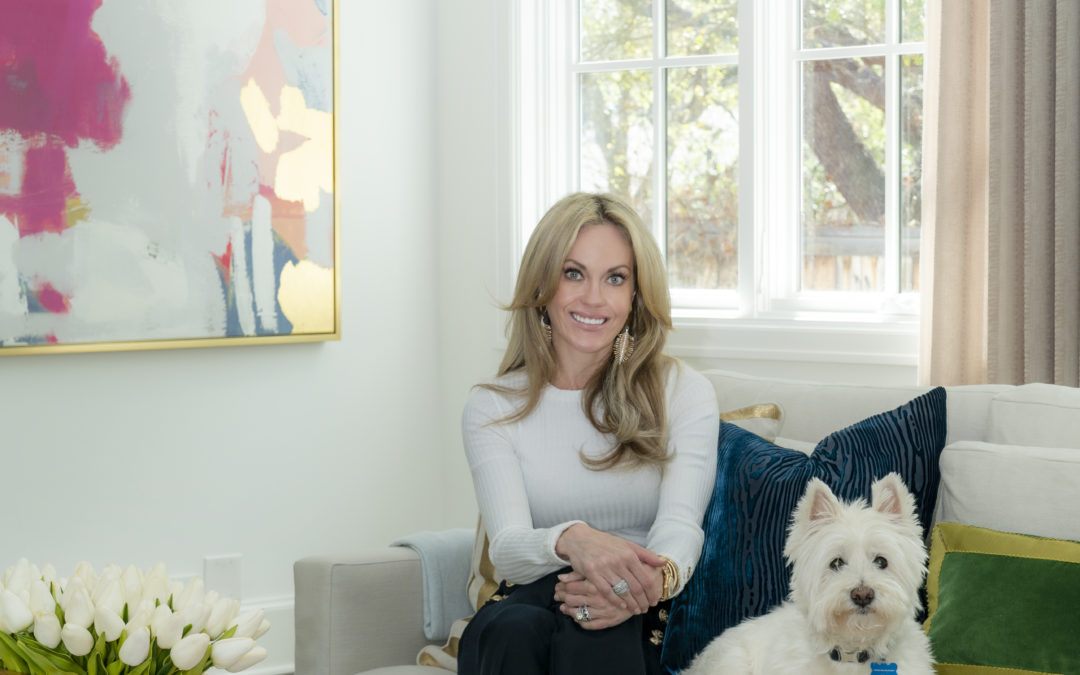